I’m sure that in later years, I was guilty of this. Trying to beat my PB and thinking the answer must be more CTL and more intensity in longer sessions. The problem when you’re doing 16h weeks is it fits between the big-volume low intensity strategy, and low volume high intensity; worst of both worlds?

My best results (many moons ago) were on months of high volume low intensity stuff. I didn’t add it up at the time but my hours were huge.

Then I had pretty good results on 10-12hours with a big mix of higher intensity.

After that, I thought if I take those 10 hours to 15 I’d get great results but without the crazy hours.

How have you got your zones set up @Matthew_Spooner?

Had a look at my stats on intervals.icu, and it’s come out like this.

Not surprising to me, that’s probably what i would have guessed at, before seeing the charts. I seem to be in the sweetspot of low volume that allows me to spend a decent amount in Z3 without detriment; in fact i think i work well off what would traditionally be classed as ‘junk’ miles.

I’m getting close to run PB form (though it’s skewed somewhat by the shoes of course!) from half mara down, off 785kms this year - that’s a paltry 31.4km per week!! Of course, it’s supplemented by cycling, which is also the best it’s ever been … though admittedly coming from a low benchmark. Though i did go 6:30 at Wales in my first IM off a ~70% success rate Fink plan as a total noob.

Taking that into account i’m looking at 162 total training hours this year, which is 6.48 hours per week. Not very much at all, especially as that includes 22 hours of yoga!!

I started to focus on my race roughly in March, so that’s 16.5 weeks of training. That gives me 3.5hrs per week on the bike and 2.3hrs per week running … which works out at 5.8 hrs per week of BR. That’s seriously low volume compared to most on here i’d say.

The thing that’s sticking in my mind now is what @jorgan and @tuckngo are saying. That this style of training will not scale up very well, and if i found myself having more time, then i’d need to shift the sessions about a bit. That’s something for me to think about in the future, for sure. 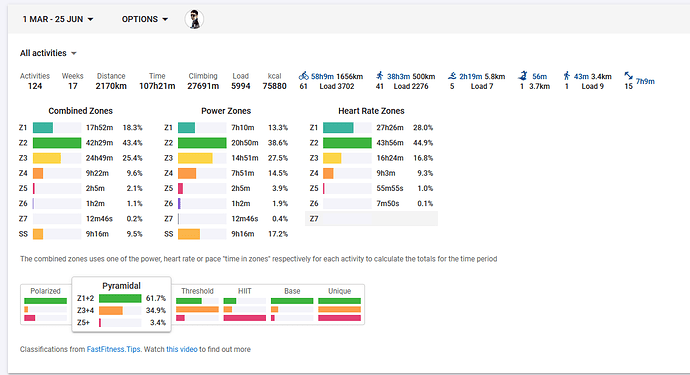 I look at Coachcox for race day performance, KQ stats etc - admittedly not the benchmark/training load stuff you’re interested in.

6 hours per week every week sounds decent & compatible with family life too. I guess it could be structured as basically one hour per day, every day, with (say) Mondays off.

I’m pretty sure some people can do really well over shorter distances with this type of approach, and for some people it may be the best way to get consistent training in.

Just checked my Strava averages for this year so far

So also around 6h per week

Most of my sessions seem closer to 30 than 60 minutes, except the occasional longer run.

I know you’re all triathletes, but does no-one have zone 0, for those parts which are just about the same intensity as sitting on the sofa or walking to the shops? To avoid giving yourself CTL/ATL etc. simply for doing nothing.

Obviously not that common in running, but any sort of social ride is full of zone 0!

Wouldn’t that be zone 1 power.
Activity recovery up to 55%

It would yes, but that’s kind of my point, you get the same “Training benefit” being sat on the bike rolling along at 90bpm (I guess that would be about 45bpm for you) as actually more serious riding that is at 110bpm. I just can’t see why people have the parts of the bike where you’re doing it at the same intensity as a walk to the shop in their CTL, but don’t have the walking to the shop.

Most of my sessions seem closer to 30 than 60 minutes, except the occasional longer run.

Mine, outside of this current little block, tends to be the opposite. Maybe 3 activities a week, but they tend to be a bit longer as a result.

Yeah snap. It just held some interesting discussion around load and volume. So I guess it’s nice to see both sides of the coin. You can, if you have a decent background, do OK off not crazy hours. Though clearly it’s geared towards shorter racing/activities.

You mean I should add my 8km per weekday dog walks and 12km weekend dog walks in there?