Anyone else into whisky?

I’ve been a long time buyer for personal consumption and recently got into collecting higher priced bottles in an attempt to beat the 0.1% interest banks now offer on cash deposits.

I’ve not got into the collecting side of things, but currently have in stock…

Did you happen to watch Romesh on BBC2 last night?
Absolutely beltin’ conversation about whisky on that

I watched that, quite enjoyed the whole program but thought his guide was a bit of a d1ck.

Ah man!
I thought Sweeney was awesome / they really played well together.
Also, scenery looked amazing. But I can’t cope with the midgies.

I tried to get into whisky once.
His comment of “who wants a drink to taste of an old house” hit it spot on for me

I said whisky not whiskey

jack Daniel`s Scenes From Lynchburg Number One This is the first release in Jack Daniel's Scenes from Lynchburg series. It features an image of the original statue of Jack Daniel, erected by his nephew Lem Motlow outside the distillery's cave...

I’ll check it out later. It’s very marmite, my wife doesn’t get it at all yet loves gin.

I’ve got about 8 open bottles (I rotate them so don’t finish quickly) and about 8 bottles in a cupboard to sell later, one is in an auction this week and hoping to make a little bit if the interest picks up soon.

Strange fact, you cant actually drink Jack where it is brewed as the county still has prohibition. It didn’t have enough people living there to vote to end it.

Not precisely in relation to the liquid, but my OH was very clear she wanted to get me something for our engagement, seeing as she had the ring. I don’t really wear smart watches etc, so the only thing I could think of was a decanter and glasses. Partly for show, partly as something I’ve always wanted but would never really justify buying myself a nice one, and partly because I do like the occasional dram.

It arrived today. She’d sourced the tray separately a few weeks ago, in order to display the set. 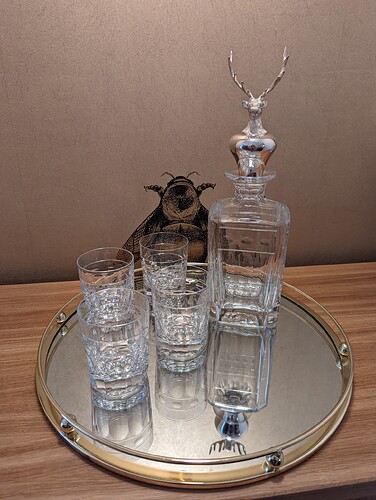 It’s from Cumbria Crystal, so hand blown. And the styling is the version supplied to most British embassies around the world (I’m quite patriotic, so liked that aspect). The stopper is the excessive part. She found they did a solid silver stags head, and as I proposed in Richmond Park and we took some photos with the deer, that seemed quote appropriate.

It’s really impressive. I’m almost too scared to use it though!

Very smart, looks a bit like the Dalmore brand.

Don’t put anything too expensive in a decanter. It’s not an air tight seal. I can recommend plenty of reasonable but good non-supermarket whiskies.