Anyone have any good SocialMedia material I can pass on to my son to help him cut through the wheat and the chaff on this subject?

He’s in the mindset that exercise can solve the obesity epidemic at the moment. Obviously he won’t listen to me - hence the question.

I’m also wondering if Loughborough Uni do anything in the area.

I know Leeds Carnegie do a fair bit of work in this area,.especially with respect to children. Tom.van Rossum, once of this parish works in this field or at least used to. Iñigo San Millan is a leading expert in metabolism and talks a lot aboutetabolic health, not specifically about obesity but it comes up in his interviews. A lot of what he talks about isn’t just about calorie deficits but also the wider health benefits of aerobic exercise.

Exercise can certainly help most of this, however there’s a lot of under researched psychological barriers to participation

in general i would steer clear of social media - it tends to be polarised, obviously, but without presentation strong arguments…

in general i would steer clear of social media - it tends to be polarised, obviously, but without presentation strong arguments…

A lot of opinion, with popularity not based on actual content but how it’s delivered.

The best book I’ve ever read on the subject is called Fat Land but it is US centric.

IMO, the problem with challenging CICO is that it gives an ‘out’ for somebody looking for one and whilst there are outliers, CICO is still the answer for most of the people, most of the time.

It’s not a popular opinion though.

This is a quick read, admittedly dry as toast. I guess it may not change your sons views all that much though.

Read about obesity and how it can seriously affect your health. Ways to lose weight safely include eating a healthy, reduced-calorie diet and exercising regularly.

@Joex - Someone else posted this link on another thread on here a while back. You're Not Losing Fat Because You're Eating Too Damn Much (Even When You...

The environmental and cognitive factors at play that have people eating more without realising. 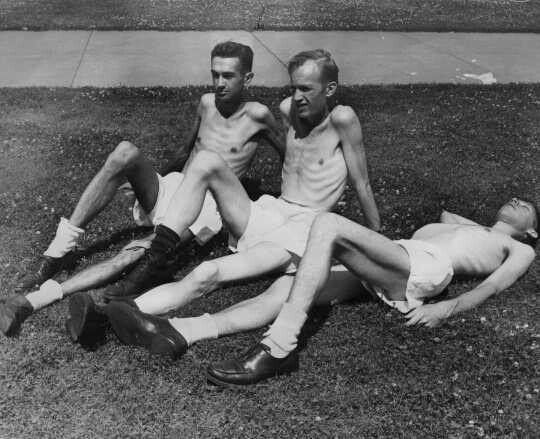 This is absolutly my experience when working as an osteopath. Some people seem happy to judge obese people as greedy, lazy and so on, generally attaching a lot of negativitty to it. But working with obese patients with whatever MSK problem they came in with it seemed to me that they over eat because emotions/thoughts related to a deep seated lack of self worth (which society reinforces), unhappiness, etc.

My response above was purely because @joex asked about exercise.

Some people seem happy to judge people of a perfectly normal weight as anorexic, bulimic, do they ever eat and so on, generally attaching a lot of negativity to it.

Anyways, CICO + exercise = weight loss.
For most people. Most of the time.
It works.
It’s like Sex Panther in that regard

the psychological side is key as mentioned above, the nutrition course i did focussed a lot on habit changing and taking away negativity around foods (foods are not good and bad for instance) A lot of obesity is caused due to deep routed issues within a person, depression, serious physical injury, and then habits form around food which need changing rather than just eat less move more.
If I’m looking for studies online Google Scholar is my starting point usually. Then you still need to separate the wheat from the chaff, but it could throw up some nuggets for you.

could throw up some nuggets

It’s not a popular opinion though.

What eating less?! The exercise part is what provides body ‘shape’. Problem is that everyone wants a ‘hack’ these days.

That said, genetics and age come into it too.

The CICO part. It’s true that there can be mental health factors and sociology economic that lead to comfort in food or over eating but the end result is putting more food in than is required.

As you get older, I think the exercise/diet ratio skews hugely toward the latter in controlling weight.

Like most middle aged blokes, belly fat is a constant foe; it’s been years since I haven’t done sit ups every day, but those abs are slightly insulated! Trouble is, I’m not prepared to ‘starve’ myself for a Men’s Health cover

I’m the heaviest I’ve been since the ops. It’s holding me back and getting me down but obviously not to a degree that I can wake up and stop shoving stuff in my gob🤦‍♂️

The CICO part… the end result is putting more food in than is required.

The CI part of it isn’t just the calories you put in your mouth. It’s also macros which changes the calories your body absorbs. See the video @Doka shared previously on caloric availability which compared protein to simple carbs.

There are hormones which control your hunger a satiety, ignoring those means that sticking to any calorie restriction is significantly harder.

the body also uses more energy to process certain macros. simple sugars go straight in to be used, protein for instance is moved to where its needed and when that’s done it is turned into energy with is pretty intensive in its energy requirements to do.

First hand experience of this, I changed my eating habits this year and the difference has been remarkable.

Three months ago I switched to a low carb diet, for the first two months I was on as close to zero carb as possible.

I went through some struggles with headaches and tiredness for the first ten days, but once that passed I have felt great, more energy, better sleep and critically never feeling hungry. This is despite limiting myself to 1500kcals per day plus 50% of exercise calories.

For the last month I have fed in slightly more carbs- roughly 50 grams a day, but to be honest I can take or leave this, it hasn’t made a vast difference.

Previously when I tried to lose weight by simple calorie restriction it hasn’t worked for me- hunger and cravings for carbs have beaten me.

This isn’t for everyone, I takes serious food commitment to tracking food, and serious willpower to not have a cheat day.

A lot of people don’t understand that 1000kcal of candyfloss isn’t the same as 1000kcal steak. You’ll also feel hungry a lot sooner on the candyfloss.