@Doka – Forgive me for pulling some of your recent posts into one thread.

However, it is possible that some TriTalkers will have missed this all together.

Unfortunately, it is now clear that your situation has gone from bad to worse.

So, I hope a single thread will allow:

Yesterday was on Wales in a day, Caernarfon to Chepstow 186 mile with tracker timing. Me and another lad was I think 1&2 after 200km. On a narrow descent he couldn’t avoid a van towing a trailer and took a glancing blow to the van. I glanced the trailer to avoid him and took a tumble but caught some posts on the tail gate with the back of my knee totally severing the artery. Que air ambulance ride to hospital where they’ve made a repair but also cut open my calf to relive pressure. I can’t feel my foot

but on the plus side I’m alive which given the remoteness was not for granted.
Don’t feel too bad all things considered flicking in and out of sleep.

The trailer was to collect a motorbike the owner of the bike being sold was an army medic. He and his torniquet arriving on the scene about 5 minutes later saved my life. That dude is my genuine hero.
Can you imagine being in the middle of nowhere, bleeding out and pretty confident you are going to die? 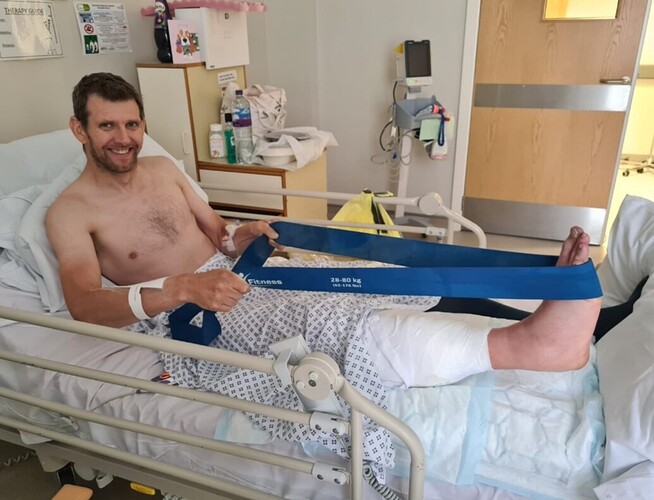 It’s pretty bad @Matthew_Spooner tbh. Up until now the plan was to keep everything going and work with physio down the line to get back movement. However there is bad muscle in their making me sick, makes me feel really sick. Had an op that night to clean out some dead muscle in the calf however recovery from op was a close run thing, I could see the fear in the nurses eye.

I’ve another op today, and going to ask them to take away the foot. I’d rather live and have prosthetics than lump around some unuseful flesh.

I hind of guessed this was the right call last week but while they seemed to have some optimism it seemed sensible to go with it.

But, full credit for your positive attitude in the face of this unexpected adversity.

I really hope that things go as well as can be expected from here.

PS
Just let us know if there is somewhere you’d like some cash donated in your name.
(E,g. Air ambulance, hospital, etc.)

Similarly, if you need extra cash for a specialist prosthetic, you know where we are.

Woah. Had completely missed this.

Not much to say now than best of luck with the rehab; physical and mental. As you say perspective is key, both on what could have been if their hadn’t been the best possible person there at close hand to help you, but also in what still can be.

Inspiring to see the positivity. I’m sure most here would like to think we’d react that way and use mindset learned from our little hobby, but I’m sure it’s completely different actually in the moment.

That won’t stop there being bleak days ahead, but I hope you can keep that faith that they’ll improve, and get support when you need it.

Goodness what strength to get this far! All the best for everything to you and your family. How life changes in an instant.

I hope things go well for you today, whatever you decide

Thoughts are still with you @Doka.

It’s really hard reading your latest news, I cant imagine what you are going through at the moment.

Clearly it’s going to be a very long recovery, however you’ve always got this community to provide support any time you need it

Given the choice between a severly impaired foot (with no chance of recovery) and a prosthetic, I would also agree with you; there is far more scope to maintain a sporting and active lifestyle. It may slow you down a bit, however, age is doing that already.

Really nicely put @Chriswim. Hopefully our little hobby will also give you some motivation to get back and taking part again.

You’re smiling more than many would be able to. Keep strong, and I hope the surgeries go as planned.

Really sorry to hear your recovery isn’t going as planned. Despite your description of the original incident I still didn’t fully appreciate the severity. Keep a positive attitude…which reading your messages sounds like you have.

Hope the correct treatment will allow you to heal faster. Stay strong!

I also have missed the latest development. @Doka, I can only echo what others have said here. Our little community is fantastic, helpful with a broad range of experience that you should absolutely call on when you need to.

You are showing immense mental strength but you are not on your own, you have everyone here

Feel so bad for you reading this @Doka.

Thoughts are with you.

@Doka Assumed that a few days in hospital and you’d be back on it and didn’t realise the latest development. Just wishing you all the best in your recovery.

So sorry to read the latest @Doka

Wishing you all the best, stay strong

cfuk me - that last part is harrowing.

but before you finally decide @Doka on an amputation please listen to the medics and their prognosis for your outcome. I nearly lost my left lower leg to developing gangrene following osteomyelitis - I was 10 - but the medics insisted on therapy after an emergency op. the leg’s still with me - looks a mess - and still works…

stay positive - TT is with you all the way

What a positive attitude you have. Wishing you all the very best in the challenges ahead.

Thinking of you @Doka, your positive attitude, and openness is amazing.

Wow. I’m so glad for you that there were quick thinking people on the scene in minutes, to literally save your life. It could have ended very differently. I’ll digest the rest later, but you’re here, posting on an Internet forum, so it’s largely positive in retrospect

All the best, fingers crossed for a good outcome.

@doka, also wanted to say, I’m no stranger to surgeries and rehabs and when I said you aren’t alone, I know you will have family but with the best will in the world, IME, they just don’t get it sometimes and they drive you mad with care but don’t get the sporting loss. (which sounds odd and cruel).