That’s what returns I’m talking about

With the rates going up I’m starting to wonder if I’d be better off diverting this overpay elsewhere and having a lump sum at the end of the deal but everything I’ve looked at currently isn’t a worthwhile difference really. If rates continue to go up this may change.

It’s hard to answer really because everyone is at a different point in life.

Some of that should probably be in the Fin Whizz thread

Stocks and shares are very much a long game. We have some but dont pay much attention to what they will be worth in a couple of years because who knows.

Doesnt seem to be any great offers for cash based savings at the min. We are going to continue to over pay the mortgage, but will have to reduce it down with the stupid energy and fuel prices.

Makes sense to pay into a savings account and then lump sum into mortgage.

Depends on your tax position though. If you’re earning more than the 0% savings rate (or if you don’t have any at all), then you need a substantially higher interest rate than your mortgage to still come out better

First £1000 of bank interest is tax free. Depends how big a lump sum were talking about.

To be getting £500 interest per annum, you’d need about £25k in savings. And hopefully, if you’ve that in cash, it’s in a nice little ISA tax wrapper.

Stick that £100 on your mortgage, you’ll save the mortgage interest on that, but also reduce your term.

Then again…in saying all of this; it all depends on what you want innit. I get a 55% uplift on my pension contribution. Which, thanks for you energy hungry folks, has done rather well this year.

There is NO WAY I’m getting that return on paying my mortgage down, or savings.

Correct, although you do get a separate dividend allowance. £2k for all

hopefully, if you’ve that in cash, it’s in a nice little ISA tax wrapper.

Frustratingly though, ISA’s do not generally provide the same level of interest return as the best non-ISA accounts. Which is a unfair really. The banks should be agnostic to whatever tax you are or are not paying, but obviously they abuse the fact they know certain people will accept a lower level of interest (benefitting the bank in reduced finance cost) because of the tax they’d otherwise pay.

165.9p/L in Ashbourne this morning 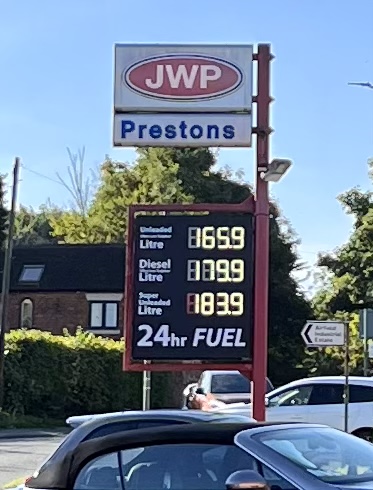 To be getting £500 interest per annum, you’d need about £25k in savings

I’d need another couple of pandemics to cut back on all the peripheral spending to starting accumulating big time. Really we need to make some small mortgage over-payments again; that would certainly help.

£4,266 per annum estimate for energy bills from January from Cornwall Insight

Something has to happen here. The price cap isnt a cap if it keeps going up by huge amounts all the time.

Pray for a mild winter, I can see ours topping £450

I bet the price of the hardware is going up though

Yeah, big companies get richer; nothing like a ‘crisis’ to make some money.

Yeah - I saw that in the paper on Sunday.
Down from >15 years to <3.5yrs.
But that’s at current/Jan predicted prices.
Likelihood of them staying that high for 3.5yrs is slim.

Oodies are on sale right now