For a Breitling thats cheap …

Lovely watch if they took the IM logo off it. Only devalues it for me.

I’m racing in my Seamaster now, they missed their chance.

Amazingly, I just got the follow up email saying they’re down to their last 100. So some people are buying them

Well, if you buy into it enough to get a tattoo, and you have the money for a Breitling, why not I guess. 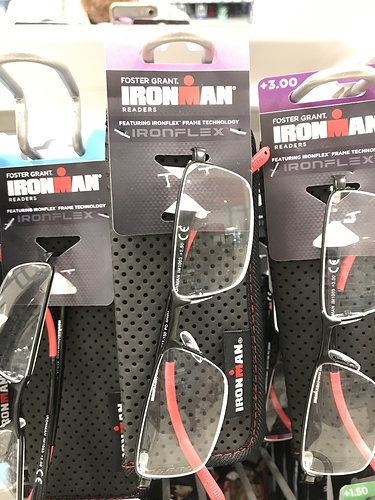 Seems an odd tie in

Foster Grant have a license; usually they do sunglasses.

My boss wears Ironman-branded reading glasses. Knowing how much he earns, I’m astonished if he’s wearing off-the-shelf supermarket specs rather than proper prescription glasses from an optician

My boss has never done an Ironman, but he’s run loads of marathons in the past and is now into multi-day cycling events, so he’s one of the few people in my office who could probably do one. Given that he knows what an IM is, I thought it was a bit strange that he’d chosen glasses associated with an event that he hadn’t actually done.

You should definitely call him out.

Your opening gambit should be something like: “what next, wearing a Green Beret to work?”

I still don’t know why you get so hung up on the tattoo thing? Isi it the same as reverse snobbery that used to get thrown at folks wearing Rapha? ( despite Costelli, Ashmei, Le Col et al all being more expensive)

An old coach I briefly used had been to Kona more times than anyone on this board, is over 70 and has tattoos and a rego plate that says IRNMAN. He has more experience than anyone here but according to you would be instantly pigeon holed as a bucket lister.

Like I said before, I don’t see any difference in this and the ‘look at me’ bollocks that goes on in Strava. To me bragging about ‘racing’ on Zwift is way more Koolaid that an IM tatt.

And no, I don’t have one

Anyone, even a one and done bucket lister, deserves respect for doing an Ironman. For a few of us on this forum, finishing an Ironman is pretty trivial and we forget that for many people finishing a 16 hour IM is a lifetime achievement, so yes I do have a grudging respect for those bucket listers who get an IM tattoo as it is an important element of their Ironman Journey

Another reason to have a tattoo is to identify as part of a group, and in the past it was a pretty elite group.

Undoubtedly there are other reasons why people decide to get a tattoo, and we shouldn’t pigeon hole anyone for having an IM tattoo.

Now Zwifting, for me Zwift can be like any other event, it is not in the same league as a physical event, but I am still really proud of a race where I lifted my performance above what I thought I could achieve. And the serious Zwifters, some of who are on this forum, are just as worthy of respect as those of us who compete in the physical world

I think Rapha is just a brand image thing; I have a fair bit of Castelli & Assos, so not really price related.