When it comes to DIY, I’m definitely your ‘all the gear and no idea’ guy. I’m trying trying to do a few more jobs around the house we don’t have an bottomless pit of money and also, with winter coming, I have a bit more time (bugger all enthusiasm). Garage is already somewhat underway.

Next project on the very long list is to replace our iron garden path/side gate with a solid wooden arched one. I think it looks neater and adds an element of security to the house.
The current gate has hinged bolted directly to the brick, and I assume that the wooden gate will need some kind of mounting posts either side? Are they countersunk/bolted to the wall?

Is this a project the hapless drill owner can do themselves?

You may need a hammer drill.
And best to check there are no wires in the cavity with a sensing unit.
But yes, it’s a piece of pie.
The wooden mounting posts go into the wall, they are nice and large brass type screws with a hex head.
These are counter sunk into the post…for which you need a drill bit (these are really cool)

Will you buy a pre-made gate? I’m sure there’s an excuse to breakout a Jigsaw here in some way!

We fitted a cat-flap to our utility room door the other week, an act of faith, hoping not to ruin a wooden stable door. As it was the hole was fortunately just a little too small (rather than too big!) so just an hour spent sanding it to get a snug fit.

I keep thinking about building a wooden firewood store, but in all reality it would probably take me forever and end-up costing more than buying a pre-fabricated one.

But think of the man points,especially if you solely used your axe to fashion it with.

Thanks all. Definitely will buy a pre made gate, must remember to actually measure the width! With the posts, will they need any additional sealant to the bricks?

The drill I have is one of those triple action Makita jobs with Hammer/Screw/Drill options but sounds like I may need a SDS type drill? (I can borrow one from a mate)

You don’t have an SDS drill

You can’t call yourself A DIY bodger until you’ve hammered a brick and mortar put with one of them (and not the brick you are drilling either)
No sealant behind the post.

Make sure you paint/stain it all before you put it on.

I built my own garden gate and attached it to a post inset into a Metpost on the hinge side with latch/lock onto a post on the other side which itself was attached to a low brick wall. if anything I made the gate too heavy but that’s no big deal in reality as the hinges are large galvanized ones so it swings OK. there are plenty of gate plans online which is where I got mine from.

I used a cordless drill with hammer action to drill into the wall - no problem at all but it was a good drill (which has since expired as the batteries were no longer available and they had died over the years).

no paint as I used treated timber which has weathered nicely

I hate DIY with a passion, but do have to dabble occasionally. We have very tough bricks in our house. But after ruining a couple of drill bits with my Makita triple action (proably the same as yours) i was advised by the old father in law to just spend a few quid on a decent drill bit. So instead of picking from my 50 pc collection with all sorts of stuff i’ll never use (for like £20 or something) i spent about £10/15 on a really good brick drill bit.

With the same drill it now cuts through the brick like butter.

But of course, that doesn’t satisfy the itch to buy a new toy!!

Yes, I have discovered that not all drill bits are equal. The original part of the house is solid stone under the plaster, and I’ve had a few glowing red drill bits after literally making no progress!

Yes, I have discovered that not all drill bits are equal

yep. dog knows how many I’ve fucked over the years. even a drill on one solid wall - burnt the motor out! don’t buy cheap masonry bits - buy the best you can afford and they’ll repay in spades.

You could have metal tray work under the plaster. I lived in a ‘mock Tudor’ type house with the dark beams actually dark painted concrete and the lighter bits inbetween were all just in a big metal tray bolted to the outside wall. So once the drill gets through the plaster, change to a metal cutting drill bit.

We’re having building work done at the moment, and the render is off the back of the house and they are ‘halfway through’ the stone wall ready to put a new window in; the wall is 2 layers of stone thick! I have a pic somewhere. Unfortunately the stone is not uniform enough to make it look nice render-free, and there is red-brick at one end! Original house dates back to ca.1815 I think; certainly well before the first census in 1840. Looks like it’s been extended twice before we moved in. The original beam still goes across the living room ceiling.

Original house dates back to ca.1815

ours dates back to 1760 and we do have some original beams and one original wall which is made of large flint stones - you need diamond bits to drill into them feckers, even if you go through the mortar between. So we tend to avoid drilling that wall.

Ours is circa 1980 and has one of those natty serving hatches, ooh lala

Bear with me, this might take some explaining. Back in Feb we had a whizz bang up to date Megaflo system installed and a ton of plumbing done to replace a terrible hodge podge of crap that was there. It all works fine. Our heating system is pressurised now. We have about 11 radiators in the house. Two of these are being replaced, a small one in the hall and what was a larger one in bedroom but will be smaller (shorter). These were removed to allow for wall skimming, decorating etc.

The radiators were ugly and old, we will be putting in some nice new ones. The hall one is a straight swap, the bedroom one needs shortening because we had to have the return pipe cut to alow for our new wardrobes (I have exposed piping). Now, the actual physical fitting I’m ok with (stud walls nothwistanding), however, it seems silly to change the rads and not change the TRVs. Which means draining the entire system.

My question is around putting inhibitor back in a pressure system. All the YT videos show tricks to adding to existing rads with pressure pumps etc. But if I have a new rad in my hand, can’t I just put the inhibitor then and fill up normally and balance? Our water is very very hard, so inhibitor is a good idea.

What I don’t want to do is screw up the Megaflo in any way and will get the pros in if need be. It’s a small job for them though and nobody is calling me back.

We lives in a hard water area and had a Magnatec filter which came as part of the basic boiler setup. It was where the inhibitor was added and was cleaned out every year.

Yeah I saw that last night. i don’t think we have one. I have seen that putting it in via the towel rail might be best but I’m unsure if that works for a pressurised system.

Scrub that. Plumber’s been round, gonna get a couple of other jobs done as well, so I’m leaving this to the experts.

Right, so gonna be a busy couple of weeks at Chez FP. Next Monday the new whizz bang insulated garage roller door is going in. A few days after that I’m having Ecotiles laid in the garage floor. Also next week, three radiators are being replaced ( Stelrad Concords).

I’m thinking of something like this but not all of the pieces. The assembly looks like a right mare though but the value seems good.

or, I found these made locally, a 4ft one with shelf and a bench top tool chest might also work. 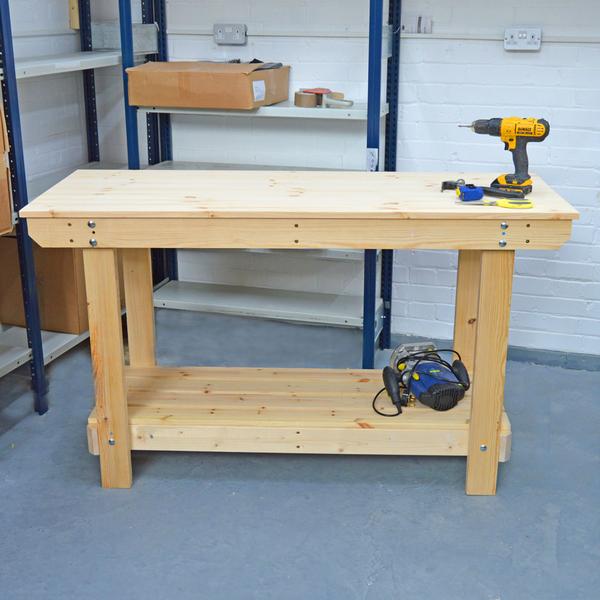 Be interested to hear/see what your set up is. And don’t suggest I make my own bench because we all know how that will play out, or at least you should by now.

Looks nice, I’ve got an old dining room table. To make your own, you will need a bench, so you could always make another when you get it. I think you’d struggle to buy all the parts for that money, so looks a good deal