Even more off topic… but do we have any current NFL followers on here?

Thought it best to start a new thread, as it was derailing the other one a bit!

No, I know how it works (I used to watch quite a bit when it was first on UK TV and still watch the Superbowl most years, but still found it boring.
I know how test match cricket works, and 9 times out of 10 I find that boring too.

I guess there’s a difference between knowing the basics, and knowing the intricacies. I used to think pro cycling was boring, as I knew the basics about time gaps and points for the different jerseys, but it was only when I understood the in-race tactics that it really started to get intriguing and make me want to watch each and every stage of a grand tour.

American football is similar. It’s often referred to as a physical version of chess. The coaches have more influence on the game than most sports. The players really are just pieces on a chess board. The tactics involved, once you understand them, are quite fascinating. And the complexity as a player is really hugely challenging and therefore rewarding. At the base level of the British game (if you said Worcester, whether than be the uni or adult team, they’re both very much at the bottom of the pile), the sophistication is pretty basic. Refereeing one of those games will also likely be fairly dull. But at the top end of our sport domestically, you have a handful of teams “doing it properly”. Efe Obada who played for the Panthers at the Tottenham stadium last week, came into the game through the London Warriors programme. He’s now an NFL star.

Even UK playbooks get pretty complicated. Stealing a page from a playbook I was involved in at one point in time many years ago, this is just defining one element of run blocking schemes. Having to implement that in real time, against a dynamic opponent, who could shift his alignment at the last second, requires a very agile mind. 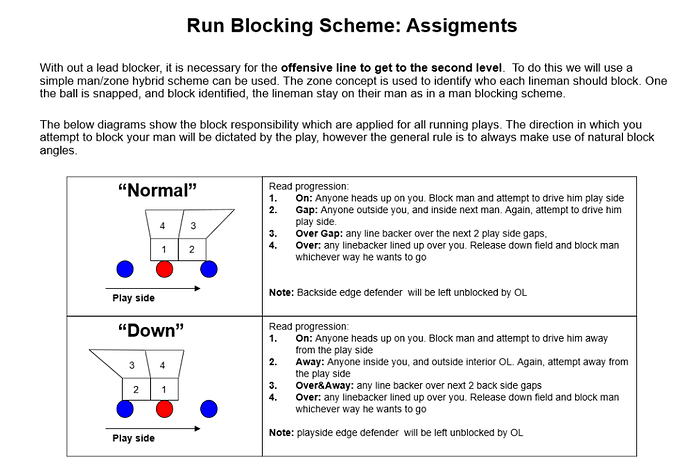 Ah that’s awesome! I take it a decade of football took its toll on your body. What position did you play?

As to the former, very much yes. When I see a new physio now, and they ask about prior injuries, it takes half the session to list them all off. Just serious ones would be…

I “just” played WR. Mainly a nifty slot type guy, in the mould of Wes Welker / Julian Edelman / etc. Obviously nowhere near as good! I’ve never been the biggest physical specimen, so had to use on field “smarts” to make up for that.

someone once referred to NFL as “ Rugby for cowards ”

I think the easiest push back to this is that Rugby is a contact sport, Football is a collision sport. I played rugby, so know the difference. I never broke or seriously hurt myself playing rugby (although I did only play scrum half!), but would come off every game feeling horrendous. I’d just ache all over, and be covered in stud marks from rucks etc. In American football, especially at WR, you can go whole games with little physical trauma. And then one crossing pattern, where a QB shafts you, and as the ball arrives up above your head, you get drilled in the ribs from the blindside by a safety travelling at full speed in the opposite direction, and just breathing hurts for a week. It’s just a different type of game. The equipment makes the contact more extreme, which is why Football has such a concussion problem … the helmets give players a sense of invincibility. Plus the nature of the game. Rugby you just want to get a guy on the ground and start the next phase of play / ruck. In football, every inch matters. When you commence a tackle you don’t want to let that offensive guy fall forward as it’s extra yardage, so the hits are more foreful to try and drive people backwards. Because of this, the tackling technique is entirely different … in rugby you slide your head to the nearside, in football you put your head across the body. Again … concussion problems!

No it’s super interesting! Cheers for that.

I find the qbs ability to read the defence at the line of scrimmage and adjust the play is amazing. When Romo started commentating and calling plays before they happened was a great example.

I don’t think I’ll get to an understanding that your years of playing have got you to but I love the minor details and reasons for certain plays being called. Player movements and coaching decisions definitely add another layer to the game that I don’t find in other sports

Haha, yeah, it’d be nice to be in tri now without the random flare ups of aches and pains. I’ve seen consultants who have said the body is strange in that deep bone bruising can just reemerge and cause pain without there being anything acute that’s actually wrong.

I sometimes think it’d be interesting to know what I could be able to do in endurance if I hadn’t spent so many years in a fast twitch sport, but c’est la vie. It’s certainly why I think short rep interval work overestimates what I can do on an endurance basis. The prolonged period of time spent playing football has meant my ability to recover pretty quickly from short moments of rest is still pretty good. Probably why I found walking aid stations in my IM marathon such a successful tactic.

It’s a fascinating game for sure, the more you delve into it the more interesting it is. I dropped my Sky Sports subscription a few years back and kind of grew detached from it. The stadiums are immense and I love the open air games in the frozen North in December/January.

Think I followed it most around the time the Buffalo Bills got to the Super Bowl every year and lost, the only surprise was whether they imploded or were tragically unlucky…

If you still have sky just not sky sports, NFL redzone is available for free each Sunday on channel 145. Basically soccer saturday, but with the live footage, rather than just ex-soccer players talking about a game!

Love his enthusiasm. No idea how he keeps it up for the 7 or so hours hat show is on for.

TBH it bores me but the doping bothers me. It cannot be good for their longterm health. 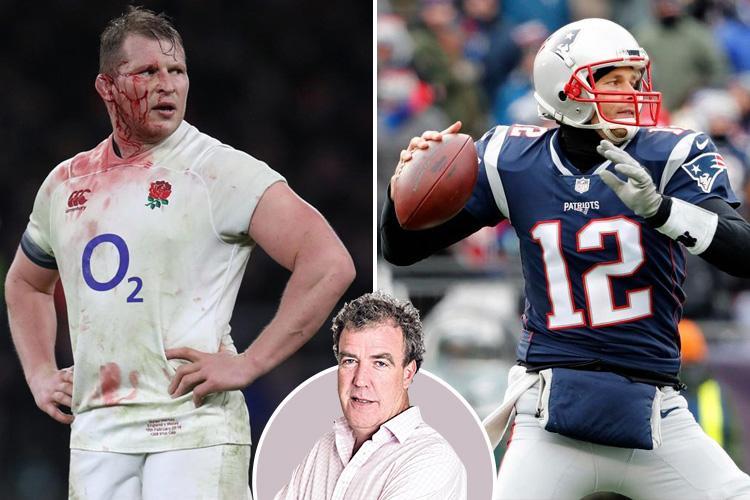 IF someone suggested selling the Queen to an American businessman, lots of people would jump up and down and say the whole idea was ridiculous. So it’s no surprise that everyone is running around, …

Apologies in advance, this reply has turned into a bit of an essay too…

Stenard – There were a number of NFL threads on the old TriTalk site.

Here is a TriTalk gathering at the 2013 Pittsburgh Steelers vs Minnesota Vikings game at Wembley. 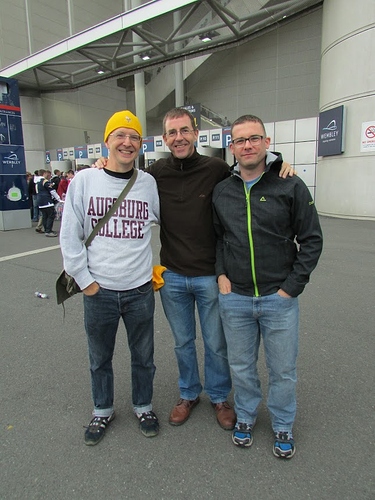 Putt Putt, Scott & Paul L
( And, yes, I am clearly sucking my stomach in for the photo. 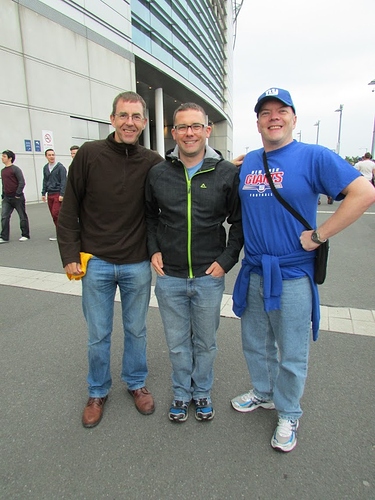 I made my first trip to the USA in 1980 and have been following the NFL ever since.

From the early days of Channel 4 coverage in the early 1980s to the current BBC NFL shows.
( I don’t have satellite TV. )

I went to a pre-season game at the old Wembley in 1992.
(San Francisco 49s vs. Washington Redskins)

Plus, the first regular season game in the new Wembley in 2007.
( New York Giants vs. Miami Dolphins )

I’ve now been to quite a few of the Wembley games and would like to get to a Tottenham one at some point.

Back in the 1980s, my friend’s dad was in the USAF and could get us six packs of MGD, etc and 1 pound (in weight) bags of Ruffles for watching the Super Bowl in the days before you could get American beer in Sainsburys.

I fully agree that it is a tactical game that bears little resemblance to how rugby is played despite the obvious similarities between the shape of the ball and the use of posts.

I’ve been watching a few of the WRC games and fear this is now a game that hasn’t kept up with the professional era.

The first live rugby game I watched was Wales vs Japan in Cardiff in 1983.

Back then, a front row player was around 5’ 9” and as broad as they were tall.

These days, front row players are over 6’ and 19 stone!

But the rules of the game are only just starting to keep up with the difference in size.

The NFL settled a concussion claim by ex-players for $500 million in 2018 and they wore helmets.

I look at the head impacts in today’s rugby matches and fear for the players’ future health.

The reality is that because the NFL players can be used in short bursts, rather than staying on the field for 80 minutes (or even just 40 minutes with substitutions) they are simply bigger, faster, stronger, etc. than their rugby playing equivalent.

So, personally, I don’t see the point in trying to compare the two side by side.

I enjoying watching both games for what they are, but I do enjoy American Football more.

Anyone using an argument constructed by Clarkson as part of their defence needs to stand in the corner and think about what they did?

I was at that Vikings/Steelers game. Vikings won didn’t they. Quite close I think. They sacked Roethlisberger on the final drive?!

Going to the Bengals/Rams game next week. Was the only game I could really get to this year. Gutted to miss the Spurs games though as I still haven’t been to the new stadium (Spurs fan for my sins). Don’t see the game being much of a contest as Cincci are really poor this year

Adam - Apologies for the late reply…

Can’t remember the sacking, but the Vikings definitely won.

As Badger was a Vikings fan and Putt Putt was a Steelers fan.
( He bought his own ‘Terrible Towel’. )

PS
For any NFL fans who have Netflix…

I noticed that ‘Rudy’ is now available and that is one of my favourite films about American Football.

I was at that Vikings/Steelers game. Vikings won didn’t they. Quite close I think

Are you sure you were there?

It was many years ago…

I have nothing to add to this thread as I know zero about the sport, however I’m going to watch NY Jets vs Miami Dolphins in two weeks time. I’m mainly going for the beer beforehand…

You’ll need it. Both teams are awful this year!

Hopefully it’s in Miami and not New Jersey so you can enjoy some sun. If it’s at MetLife they stop serving beer halfway through the 3rd quarter

I’d been told it was likely the worst game to pick in terms of decent teams, but unfortunately it’s nearly the end of the season and was the last game I knew I could make.

And unfortunately it’s also at the Metlife! Not a problem on the beer though I’m sure I’ll be happy to leave by the end of the 3rd quarter probably!

Na you’ll have a blast it’s a cool stadium. Wrap up warm it does get cold sat there. Especially if you get the train back to Manhattan. You have to change at Secaucus and there’s normally a wait for a train

Love NFL, been a Redskins fan since the 80’s, shame they suck so badly at the mo, was at the tie game they had a Wembley a couple of years back against the Bengals 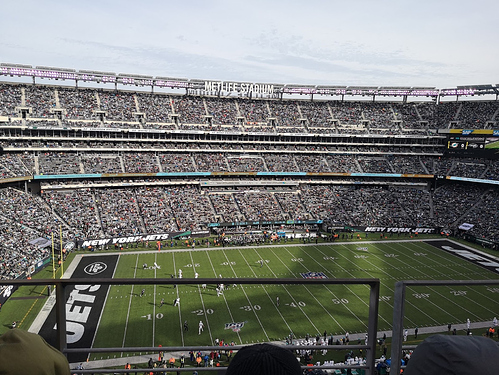 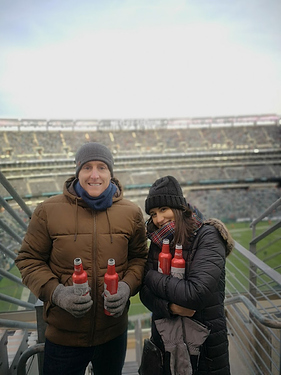