Can we link to the old TT site? All my reports are on my blog there

yep, going to do that. I think i will do a full list when I set up the static archive as the links will work better hopefully

for the links in the archived thread change the “http://www” to “archive”

My wife did her first ever triathlon today. It was organised by her local running club and was as informal as you could possibly get

My wife rode a bike for the first time 6 weeks ago. She wanted to learn to ride now that she is 50 (21 April) and to do a triathlon before she is 51

She swam breststroke at 2:10/100m (faster than many IMJers swim) with no wetsuit in 18 degree water (I offered a wetsuit)

I ran alongside her on the bike, 15km @ 4:30/km pace… she would have gone further but the cycle track joined the road at that point, and we had agreed before hand that this would be the turn around point

I ran 20km alongside her, definately not an easy pace

This is exactly what triathlon should be like for beginners. They had 25 competitors, most doing a tri for the first time, and most will do another tri as they enjoyed this one so much

My wife loved it, and is now looking to improved on the bike, and to enter another sprint this season

That’s really cool Matt. Hope she continues to enjoy it!

This is exactly what triathlon should be like for beginners.

That’s awesome Matt.
I made a point akin to this on the BTF high performance facebook group about there is too much emphasis on equipment and performance in the Tristar / Junior levels and not enough about just showing up and having a go, hence we never attract children from different economic and ethnic backgrounds because its all about the latest gear. WE had one 14year old on an S5 with Zipps and Di2! This stems from the adults and is why the sport is overrun by white middle class families at both adult and junior levels. We need more of this in the UK.
any way a bit OT there

Our club usually run some training duathlons, 3k/16k/3k at the local cycle circuit, open to members and friends which is quite popular when the weather isn’t too bad.

Get people from sub 2 Olympics quality, to first timers on an old MTB etc., all having fun.

Check out the tri bike, with one really happy triathlete 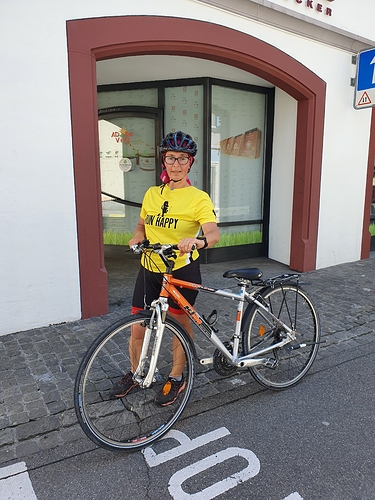 For most people the kit should be irrelevant.

The sport was more like this 15 years ago, you often see MTB’s and hybrids but i think somewhere along the line it changed a bit and you get more “all the gear no idea” types and it lost its way a little. It should be about accomplishment and enjoyment for the vast majority.

I borrowed my mates MTB for my first one and did breast stroke.

We put on 2 Tri’s a year. The first is OW with quite a long/hilly bike and attracts fairly serious competitors. The second is a pool swim & pretty flat and attracts all sorts. I love marshaling at the second race as the joy you see on the faces of those just having a go on an MTB or shopping bike they dragged out the shed is priceless.

My daughter did her first BT Tristar last year at 8 years old. She’s a pretty good swimmer but the level was mad - the first swam 50m in like 35 secs or something - and she came out second to last. Biking was on an outdoor bike track and because everything was so hyped up she managed to crash when dismounting, trying to copy others doing flying dismounts. Despite bleeding knees she forced through and went on the run. I was massively impressed, serious determination. She completed but was drained at the end, not necessarily physically but psychologically.
The race was anything but welcoming and completely copying the hype I have seen at full-on m-dot events. From proper adult-style race briefing (with all the terminology) to no finisher medals, trophy for top 3 only (if you’re not a winner, you’re a loser). Throughout there was absolute no allowance for parents to help in transition, neither setup nor when she couldn’t get her biking top on (wet etc), first timer or not. I felt it was soooo wrong for 8 year olds and their first intro to triathlon.

Amazingly it hasn’t scared her off and she wants to do more. But there’s no chance in hell we’ll do that one again before she asks for it herself. I’ll pick some small club stuff similar to what Matt described above.

The Transition I do agree with, tristars can have 1 helper but if you let every kid have one there would be no room, parents wandering aimlessly around and it’s also about letting kids take ownership also. There are ‘usually’ very good marshals to help guide though. There are some really good events but the sport does attract a certain type of adult and hence kids. I was at one race last year and a guy (they are at el Niro’s school) in full GB AG kit, tshirt, tracksuit baseball cap, his nike floomfly alphapros running along the bike course screaming at his daughter, dont stop till the finish you got this, you’re a winner fight blah blah. She told everyone in school on monday and got a special mention for “winning the big triathlon championships”…she came 35th in her AG and it was a local event. Why couldnt she celebrate finishing and enjoying herself. Year before the same bloke had argument with referee who wouldnt let her swim in her trisuit with number pinned on. Referee was a St, even sourced s t-shirt so she could put it on in T1 but no…not good enough. See these parents all over unfortunately and it’s not limited to Tri.

This really cheered me up after a bit of a shitty day. That sounds like a great way to run a beginners triathlon. I hope your wife enjoyed it!

My daughter entered the Scootathlon when I did Woburn last year. No timing, set the kids off in waves, scoot, bike, run. She absolutely loved it, went round the course with the biggest smile, got a t-shirt and a medal which she took in for show and tell. I stood head transition because she tends to lose things and couldn’t find her bike. Because it was wave starts for safety there literally were no winners.

My wife did Blenheim as her first Tri last year. Borrowed wetsuit, admittedly a road bike with clipless pedals. She hates bike training and any cycling on roads, she loves run training. Yet weirdly she hates run races but loved the tri and has done a couple more since.