I’ve mentioned it before but it happened to me on a 100TT last year, luckily it was the rear mech, so I stopped, swapped it with the front and barely lost a minute, but that minute would have been nice.

Having looked a bit, it does seem like some wheels do now offer the option to have the new 12 speed freehub body changed. Newer Zipp wheels do with the 176/177 freehub, got a feeling my 404’s might have one.

But the groupsets aren’t cheap and you have to add on the cost of the freehub, cassette & chain. Looks like the TT option might only be for Red, but I haven’t spent too much time looking.

Hopefully it will be around a bit longer so the second hand prices might come down, also depends on future compatibility, which is something Shimano has done well on.

Not looked at Campy, it’s good stuff but similar problem with less spares on the second hand market, higher cost, and my wheels are all Shimano.

my wheels are all Shimano.

With 11sp, I believe you can run a shimano 11sp cassette with a campy groupset

Yes, might be less smooth shifting but hardly noticeable. Easier to stick with Shimano though for me, I’ve got loads of spare bits.

I’ve got 12-speed eTap on my Specialized Roubaix team bike this year and the jury is still out for me.

It took a while to get used to the shifting, but once I did it’s quite intuitive. I had it set-up with sequential gearing, which is pretty cool, but it seems to have reverted to standard shifitng by itself now

Battery life definitely isn’t a patch on the old Di2 10-speed that I’ve got on two of my other bikes. I took on eof my Di2 bikes out for a spin for the first time in nearly a year and the battery was still showing nearly full charge. In contrast, I hadn’t ridden the eTap bike for about 4 weeks and both batteries were completely flat. On the plus side, you get the battery level light on the mech on every shift, so it’s easy to see when they’re getting low and the front mech should run down much slower than the rear, so easy to swap them over mid ride if the rear goes flat. The Roubaix has a 48/32 chainset and 10-33 cassette, so I hardly ever need the small ring

I don’t know whether it’s a bad batch issue, but probably a third of the team have had issues with one of the mechs going to sleep.The first time it happened to me was about 200m from my house at the end of the ride, so not too much of a problem. Yesterday it happened 15km from home while I was in the 10 sprocket.

The rear mech basically went unresponsive. Both batteries were fully charged before the ride and I swapped them over when it happened, just to make sure. The reset protocol had no effect. Last time it just fixed itself after leaving it for a couple of days, so I’m going to leave it and see if it sorts itself out

At that price its semi tempting to retrofit on my old 10sp Road bike. I can only think the guy doesn’t appreciate how rare the 10sp stuff is now. I think if he sold all the bits separately on ebay he’d make way more

It’s never missed a beat on either of them, but at some point in the future I can strip down one of the bikes for spares to keep the other one going.

Have they changed them then? And are the new ones not compatible with the original 11sp version? You’d have thought they’d have made a lot of stuff backwards compatible. 11sp etap was hardly out for years and years for them to be discontinuing spare parts

Yes, the new 12 speed one is a smaller box and apparently not compatible with 11 speed, not sure why not, it must only be a bit of code?

The blip cables etc. look to have the same connectors.

But, fairly sure it’s the same box for Force & Red so they should be around a lot longer with more spares, although a new one is still nearly £300.

These are going for silly money on eBay …!

I have two… but one has mental health issues ! 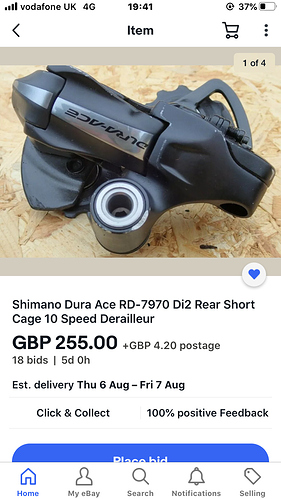 I suppose it’s cheaper than a new groupset although an Ultegra upgrade kit isn’t that expensive, as long as your wheels can take an 11 speed cassette.

But there’s going to be reducing numbers of them.

The rest of the groupset is pennies … but the rear mechs are crazy money for old unreliable tech.

As per the other purchases thread Wiggle are doing a full 12 speed Force etap groupset for £1k if anyone is interested.

Single chainring with this…?!

No, it’s a double so includes the front mech. There was a couple of chainset options but I went with 48/36 I think and 10/33 cassette.

Freehub bodies next to look at. It will hopefully make me slightly less worried about the blipbox going and not getting a replacement easily.

I’ll be getting discs in a few months … I’ll need something more modern for that .

My P5 will be the only rim brake bike I’ve got left.

As per the other purchases thread Wiggle are doing a full 12 speed Force etap groupset for £1k if anyone is interested.

I hope you have better luck with it than I have. My rear mech keeps going to sleep on me. The first time was about 500 metres from home at the end of a 145km ride and the 2nd time was 145km into a 160km ride, leaving me stuck in the 10 sprocket

I think I’m the 4th or 5th out of 20 on the team who’ve had similar issues. I don’t know if this is a general issue or if our bikes were just fitted with a bad batch.

Worryingly, I gather SRAM get a bit arsey with the warranty if the firmware isn’t up to date. I’m pretty sure I’m not up to date (who regularly checks for software upgrades on their bike groupset???), but I can’t update it even if I wanted to because it won’t wake up long enough to bluetooth with the app

It took a while to get used to the shifting, but once I did it was pretty good. It’s just the unreliability that was the issue for me and TBH it’s a pain having to worry about 4 different batteries.