I tried to find an equivalent. But then I realised, there’s no precedent for this year. It promises to be the most interesting election ever, because the US have never had an incumbent lying to that extent openly, and there remains a possibility of incredible economic shockwaves should Trump lose.

I find the alternative narrative horrifying. Trump has been banging on about the illegality or potential fraud of postal votes for months and let Covid run rampant, knowing full well it is Hispanics and Black Americans that run the biggest risk with the illness.

So who’s less likely to go out to vote? Democrat voters. Who’s damn well sure they’ll be there with their guns and all to make sure the election isn’t rigged. GOP!

Anyway, I am sort of sure this has all been a long game by Trump and he’s an evil fucking genius and will get another term. Biden ain’t bloody Obama. And the lag in postal votes will play into Trump’s hands as well, even if in a year we learn the Democrats should have won,I’ll bet they concede when the fucking militias start arming in response to the postal votes closing or overhauling the gap.

Apologies for being so overtly anti Trump. I’m not here to espouse my political views.

I wonder what Biden will do about the televised debates.

Is it worth the flak of ducking them in order to eliminate the risk of him appearing like a doddery old man losing his marbles and shifting opinion back to Trump.

I don’t think he wins either way.

Feels like Tennis when you get a match won by unforced errors. Maybe Biden remains in the rear view and hopes Trump makes a monumental gaffe.

I’ll bet he’ll worm his way out of this one too.

The democrats just need to wheel out the campaign from 1960, just colour it orange. 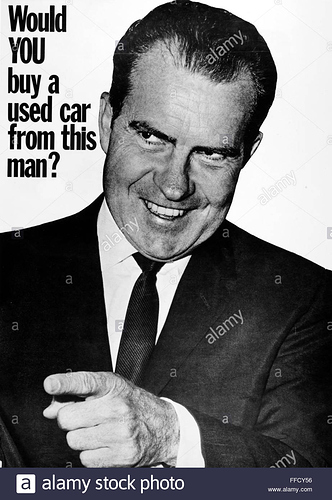 Is it worth the flak of ducking them

I dont think they should tour their candidate at all, especially auch an easy target as Biden. Just attack trump incessantly and moronically, without ever responding or talking to him.

Bet they fucking would though. (Related to poster)

I find their lack of insight disturbing…

Seriously, America has gone from #1 on my dream holiday list ( Chicago, Memphis, Nashville, tracing the blues…) to the same status as Israel (really love to go there, have a family, ain’t fucking happening). Don’t think I’m alone.

The BIG.I.AM. to an afterthought in less than one generation. I give you Donald J Trump.

Apologies for being so overtly anti Trump. I’m not here to espouse my political views.

Anyone who is pro-Trump is wrong, they just havent realised it. The problem the Democrats have is that they seem to be totally blind and keep putting up the same political stereotypes the Americans have had enough of. I mean, just look at Biden - youd think he was a corrupt US politician if youd never heard or seen him before.

Totally, GOP controls the media/ social meeja agenda in a way the democrats can’t begin/ afford to comprehend. I found it interesting when Michael Moore last week said if you don’t want trump, you have to stop seeing it as a partisan issue, ie, fuck the Dems, just vote against Trump!

Telling that the Dems are probably going to have to hide their bloke in order to beat Trump.

Even now, Biden’s lead is pretty small and vulnerable - think it is less than Hilary had at the same point. Mind you if they’d selected Barmy Bernie it wouldn’t be a lead at all…

Maybe Jeremy Corbyn has an American grandad, that would shake things up a bit for the Democrats.

Francie Boyle nailed it: the choice facing the American people is between narcissistic personality disorder and Alzheimers.

When the threats to your country are presented as crime, a declining economy and forerign subversion do you go with the psychopath or the pitiful?

Bush Snr only had 1 term; can he come back?

The Democrats had so many great candidates, I really can’t understand why they chose such a weak one given the field. I think that they did the same last time round with Hillary as well and are repeating the same mistake.

Einstein “ Insanity is doing the same thing over and over and expecting different results.”

Biden is the perfect candidate to face Trump, born out by the fact that Trump has not been able to come up with an effective attack line on him. He’s tried everything from he’s a Washington swamp dweller to he’s a radical leftist but the attacks don’t stick because they aren’t believeable. And he can’t be demonized because he’s an old white guy who doesn’t look scary to the voters who are going to swing this election.

He really is nothing like Clinton, there was an undercurrent of dodgy dealings surrounding the Clintons for years/decades so “Crooked Hilary” stuck.

The fact that Trump was overtly attacking Biden, and taking it easy on Sanders, means that Trump feared Biden as the Democratic candidate, and wanted to influence the selection. At least that’s what political commentators were thinking.

The ‘he’s harmless’ approach with Biden was certainly viable. But Biden is in serious cognitive decline and they’re going to have to hide him until November. That still gives Trump angles to work.

Best thing is if the US far left backs down on the violence, protests and culture wars, just make it less visible until after the election.

They can probably smuggle Biden into the White House in those circumstances.

Best thing is if the US far left backs down on the violence, protests and culture wars, just make it less visible until after the election.