On NYE 1999 we were on our way back down from a failed attempt to climb Aconcagua in S America - the highest mountain in the world outside the Himalayas at just under 7000m. 4 of our team made it, 16 of us didn’t for various reasons.

We stopped at a rocky stopover on the way back down after a 10hr trek, finished off with a mule crossing of a river. At 8pm we celebrated the arrival of 2000 in the UK (4hr time difference) and went to sleep. At midnight local time, I was woken from my deep slumber by the sound of fireworks set off by Argentinian guides and crew celebrating the local New Year - Mrs FB says I sat up in my sleeping bag, said “what the fuck!” and promptly went back to sleep.

Don’t think I can top that experience. 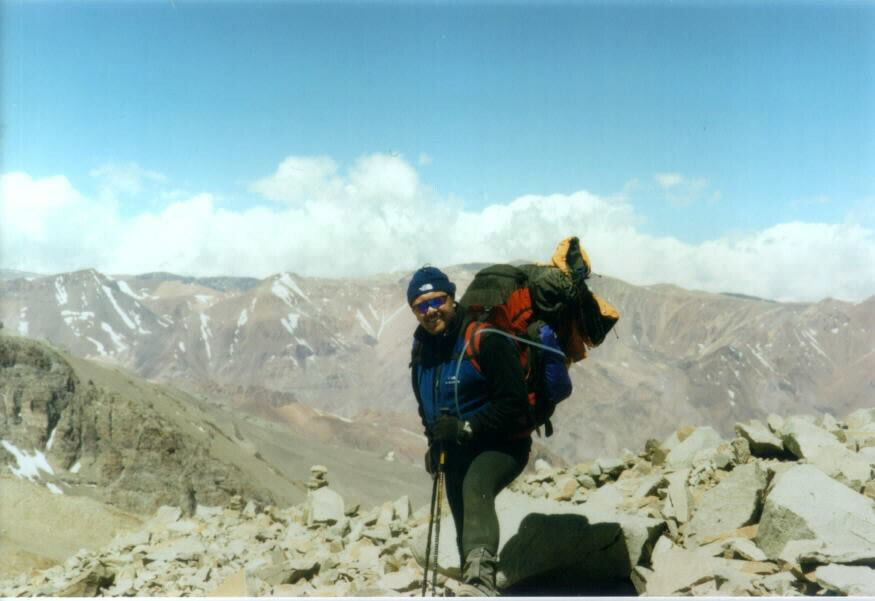 No photos to hand but we were in the Sahara Desert in Mauritania, no alcohol allowed in the country so definitely a sober affair. Brilliant lighting from a near full moon as we saw in 1997.

Can’t post it here, and certainly don’t have photos.

I spent NYE 2002 in the Lodge overlooking Cotopaxi iirc. We went up to the high refuge on 1st Jan I think, then summitted Cotopaxi on 2 Jan 2003. I was definitely overlooking or on the slopes anyway!

I’ve always found NYE a bit sad, I tend to walk out of parties and gatherings before it gets to midnight because I don’t want to be part of the celebrations. On NYE 1999 I thought it’d be nice to drive down to the sea and sit on the beach to see the new year in, that way it didn’t involve any forced celebrations and I could do it at my pace. So we sat there on the beach at Dymchurch, it was totally pitch black. Couldn’t see a thing. The sea was flat. Nothing happened. We got back in the car and drove home.

The plan was to climb a mountain and sit watching the new year sun rise and propose to the now Mrs Bob. Romantic eh!

Unfortunately, the weather didn’t play nicely. We summited about 4am battling 30mph constant winds and significantly higher gusts. The snow was blizzard conditions and an almost complete whiteout. I popped up a bivvy shelter and we sat drinking a hot drink waiting for sun rise and a break in the weather. Mrs B was starting to cool down pretty fast so I decided not to wait - she had no idea of the proposal plan and thought we were just two nutters who couldn’t go to the pub like normal people on new years eve.

As I was packing up I thought, f*ck it I’ve come this far, so I dropped to one knee and shouted my proposal into the wind. I couldn’t exactly see her, just her headtorch shining through the darkness and blizzard. She couldn’t hear me above the wind and thought I had fallen over so was trying to pick me up. I was resisting and trying to shout louder. After a commical tussle she eventually heard, said yes, and we trooped back down the hill. Not in the least bit romantic but it was memorable.

I proposed on the top of The Cobbler in August; the weather was somewhat better! Her face is best described as shocked

The best NYE I used to have was when I was about 17 I worked in the restaurant that was part of a zoo. It was family owned and the owners were very nice generous people.

During the day it was a kids restaurant, but on NYE it hosted a proper posh party for local landed gentry and rich folk. We all had to wear bow tie and jacket and were trained in silver service. It was great because by about 11 service was done, the tables cleared and it was just disco. Had to serve the odd brandy or wine.

We got paid double time, all my mates were working also, and at midnight the owners would open champagne for all the staff.

Best bit though was the tips. Drunk rich people can be very generous. One guy offered my brother 50 quid to drive him and his range rover home. I followed behind to bring him back and we were going to split the 50 and he gave us both 50 notes.

There’s only one place to propose to a proud Scots woman. The English Lakes

I should have waited for the summer too! I can’t really tell you what her expression was. Twinkling is probably the closest description.

fatbuddha, that looks great (except that huge backpack!).

Another one that generally hasn’t done much on NYE or had any brilliant experiences. I do remember ending up at a party with some friends until fairly early the next day, that would have been my early 20’s at a guess?

On Y2K I vaguely recall the weather was horrific, there was a few of us in Stockton but came home about 12:30 as I had to go into work the next morning in case of the Y2K meltdown that didn’t happen!

3 years ago I was in Budapest as I’m getting the reminders, but came home on NYE.

Thailand, Tenerife, Dressed as a Woman in 2000… Cream in Liverpool, Ministry of sound…

Hard to pick the best one, had a planned party with some very dubious characters tonight… social distancing …. None.

Going to give it a miss as still haven’t seen my family for Xmas and don’t want covid .

Peak NYE is always your mid teens to early 20s.

Happy birthday for tomorrow in case I forget

My birthday is NYE so it was always an excuse to have a party or extend the festivities from Xmas all the way through to NYD. Now I just want a quiet life but as my son edges closer to 18 I know that the NYE party cycle will start again and it will be pay back for all the strife I put my parents through

Happy birthday for today then!

birthday wishes to @leahnp for today and @Mungo2 for tomorrow!

fatbuddha, that looks great (except that huge backpack!).

'twas an epic trip. the backpack was huge as we were load carrying between Camp 1 at 5000m and Camp 2 at 6000m (pre-summit camp) but a lot of it was lightweight but bulky stuff. Original plan was to summit on NYE but as we had an excellent weather window, summit attempt was on the 29th, 2 days earlier than planned. So we got back to Mendoza with a couple of extra days of R&R - which was basically on the piss for a few days!

I never/rarely see in the New Year.

Happy pre Bday @Mungo2. My son is thankfully working tonight at the local restaurant so that will keep him out of trouble this year.