You've got the pussies, so let's see your mutts nuts

or no nuts as in the case of Troy… 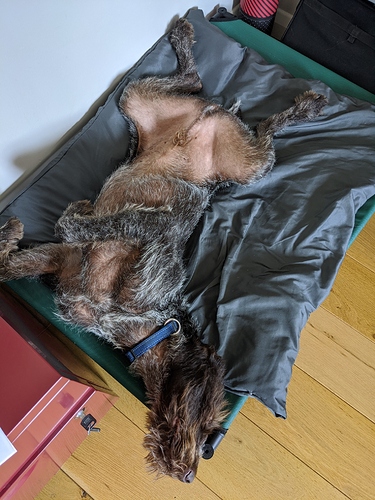 Troyan’s (Troy) a German Wirehaired Pointer found abandoned in Bulgaria (town called Troyan hence his name) and taken into rescue over there for 4 months. He arrived with us just over a week ago for his permanent home. He’s thought to be about 2 years old (although we think he’s younger) and is pretty much untrained so we’re having to start from scratch with him - it’s bloody hard work but we’re seeing some progress. In the house, he’s fine; out of the house he’s a 'mare! hey ho - we’re in this for the long run. 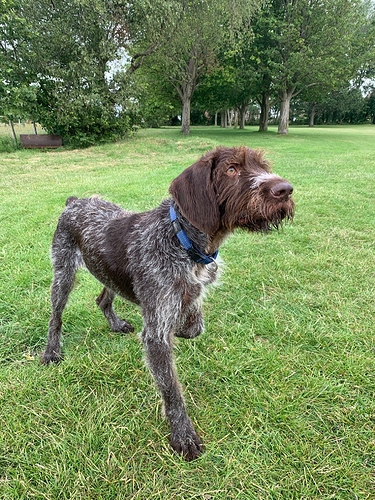 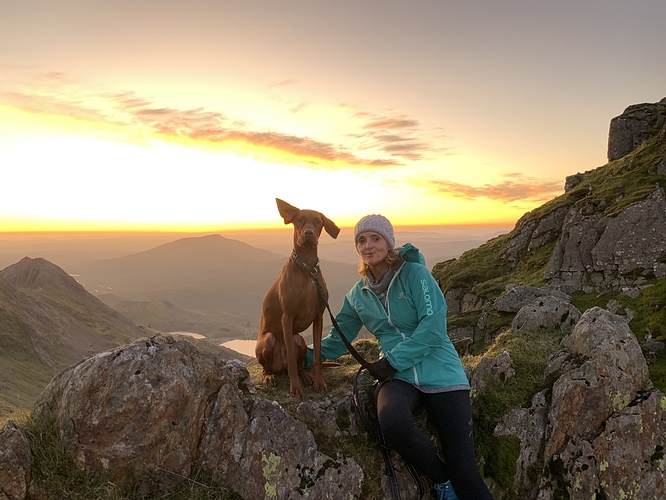 this is Oska the Vizla at the summit of Snowdon at dawn.

We chose Vizla’s as they love to run. Regularly do my long slow runs with him up to 20 miles so far. We have walked the Ridgeway with him (86 miles over 4 days) and did the Yorkshire 3 Peaks last weekend with him.

Mad as a box of frogs but great with it.

No nuts as he has been “done”

Yeah my mate bought one, for that reason, last year some time. He’s nuts! But boy can he run!!!

cracking photo! but sorry to be a pedant but isn’t it spelt Vizsla?

we considered getting a Wire Haired Vizsla but stuck with a GWP as we’ve had one previously and understand their stubborness and idiocy. they also have very high prey drives so watch out any small furry or feathered things!

most of the HPR (hunting, pointing, retrieving) breeds like the GWP and Vizsla can run for ages. Troy needs his stamina building up as he was a street dog, then a rescue, so he’s never had a great amount of hunting exercise since birth and we see this in his shoulder muscles which are underdeveloped giving him some bandiness when he runs. but he can still shift!

Oska does love to chase squirrels - thankfully never caught one yet

there is a guy round here who has a GSP that he “walks” on his mountain bike at full tilt - the GSP has no trouble being out with him for an hour at that speed. Seems to be a bit of thing with mountain bikes - https://youtu.be/m5u3GRKhHUU

Wow that dog is rapid

that is one rapid Vizsla!

Testing out the new sofa bed 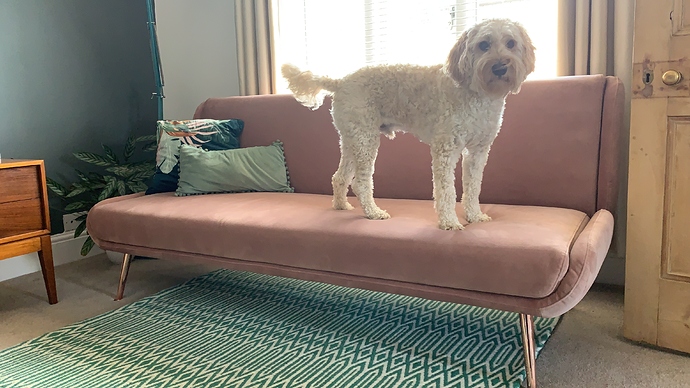 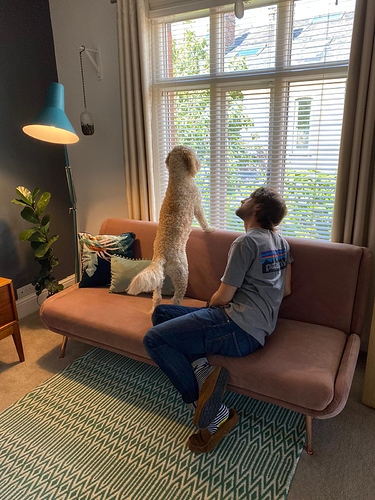 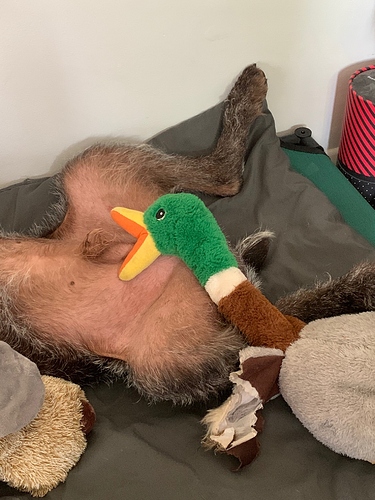 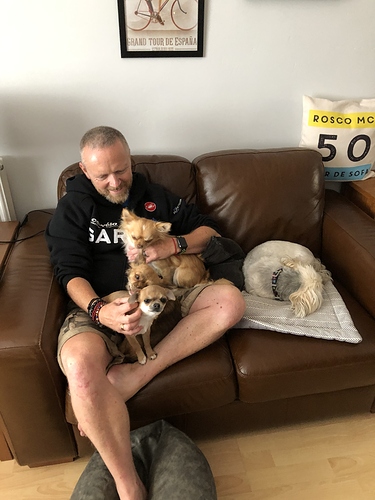 Me and the pack. 3 Chihuahuas, the 2 boys are a year old, the little girl is 6 months. The Apso at the end of the sofa is 13. Benji, Sebastian, Theodore and Genevieve 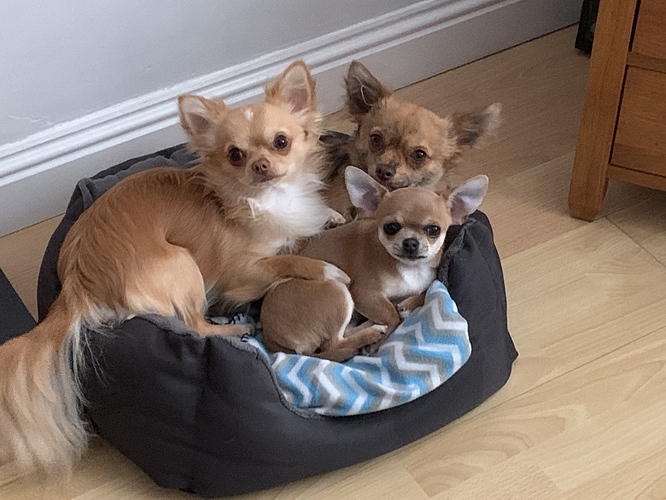 Another one of the 3 amigos.

Took the wife 17 yrs to persuade me to get a Chihuahua, ended up getting 3 in the space of a year.

Always been a Labrador man, not now. These 3 are amazing.

have to say that I’m not a fan of Chihuahuas or any similar small dog - especially those with faces that look like they’ve been punched (pugs etc) - although a cocky Wirehair Dachshund could be a possible. I’m sure these small mutts are fine, but they just don’t do it for me or Mrs FB. I was brought up with working gundogs (Springers) so am always tempted by these sorts of breed.

our rescue has been with us for 3 weeks now and seems to have settled in nicely, and we’re seeing lots of improvements when out. we took him to a gundog trainer this week who has experience of the GWP breed (he breeds Viszlas) and he thought Troy was a cracker. we got some good training insights from him which we are applying and they seem to be working now but obviously a long way to go. we’re back to see him in about 4 weeks for another assessment. 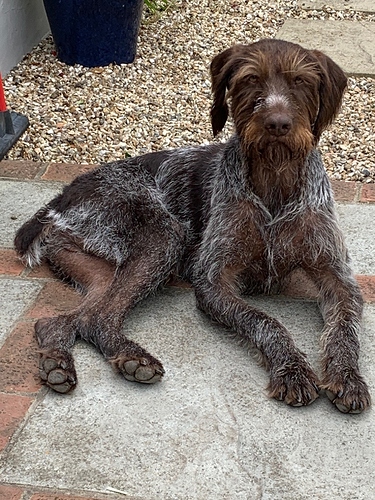 ah well, guess it had to happen sometime.

we had to take Troy to the emergency vet yesterday afternoon as he decided he wanted to climb over a wire fence out of a field rather than take the easy option of coming out the way he went in through a large gap. as a result he caught his belly on the wire top and ripped a nice hole in his belly flesh which needed attention.

one vet visit, 5 staples and some drugs plus the collar of shame later I am £300 the poorer. If I’d chosen stitches, it would have been over £600 'cos of the extra work required, so staples it was.

Hope he gets better soon.

cheers. he’s fine this morning and went for a walk with no issues although we didn’t throw anything for him to chase to stop him landing on his belly when he chases down things. just need to keep him calm on walks for a few days to let the healing process continue.