If I wanted to spaff some not insignificant cash and go to a wind tunnel for aero testing then what are my options in this year of 2021? (And let’s pretend COVID has been vanquished and everywhere that’s temporarily closed will actually reopen).

Where do you know that’s still in business? And who’s operating out of velodromes, so not necessarily a wind tunnel? I thought it would be good to have a thread on aero testing but apologies if there’s a thread elsewhere, I did do a search first honest.

EDIT to add links based on the replies below:

Aerocoach are still going, although the Boardman Centre where they used to do the wind tunnel testing closed down. They use Newport & Halesowen velodromes for Indoor & Outdoor testing.

I think there was one at Southampton Uni or somewhere like that but not sure if it’s still operating?

How long was the Boardman Performance Centre actually open? Seemed like a very short life; thus far. Hopefully it will get a new lease of life at some point.

ETA - I see it was 2 years, then Halfords shut it down as part of wider closures. What a waste of all that investment.

Yeah, it’s a shame. I went to the opening and had a tour from the man himself in October 2018. The work that went into the tunnel would be a shame if it was lost and not picked up by someone.
I remember him showing us a completely pointless staircase that went nowhere at all on the intake side of the tunnel to make sure it was completely symmetrical with the one on the other side and wouldn’t distort the airflow.
Obviously Covid didn’t help (it closed in April last year) but I do wonder if it was just in the wrong place and may have done better in London or the South East rather than Evesham.

It was in a weird place.

It seemed like it was a planned shopping village type affair, with some high end brands, but it was pretty quiet when I went there

Feel free to have a look/laugh at mine

It’s my home town. I always thought it was a very strange location. That outlet village is a bit of a non-entity.

But it does have a little train

I do wonder if it was just in the wrong place

This will not help with finding a new owner imo. I don’t think it had anything to do with Halfords divesting themselves of it though.

I’m not sure you can draw such a distinct line. I know Halfords closed their more specialised bike stores to focus on the auto side of the business but had it been raking in the cash they may have made a different call, and the location is a factor in its profitability.
They still sell Boardman bikes so having the centre as part of their business would add a bit of kudos and status with more discerning buyers of the higher end Boardman bikes although they seem happy to sell only from their auto centres and stick to mid-range and downwards.
Ps. Just checked and they do the SLR Disc at over £3k so a bit higher than I thought.

As soon as they put me in the “praying mantis” position, it was so much more comfortable

Your frontal area also looks significantly smaller too. So a win win

Problem we had on the day, was that Blue don’t use standard size extensions, so we couldn’t chuck the reverse ski bends in, hence why I’m just holding them up

Your new position looks slick. Is it comfy and sustainable for longer tris. Reading all this I’m gutted the Boardman center is no more. Off to Google the others…

Haven’t really had a chance to test out too much on my race bike.
I’ve set up my training bike, which has the same geometry, to the same position and can sit there for ages, especially now with the new arm rest cups.

As for racing, all I can tell you is the first race I did after the testing was the Marshman down in Kent. Pretty much pancake flat but windy.

After 1km I was leading the bike. Didn’t see another soul for the whole 2 laps and had the fastest split by almost 2 minutes

Don’t you get eye strain trying to look? Appreciate its not 100% of the time but I couldnt cope 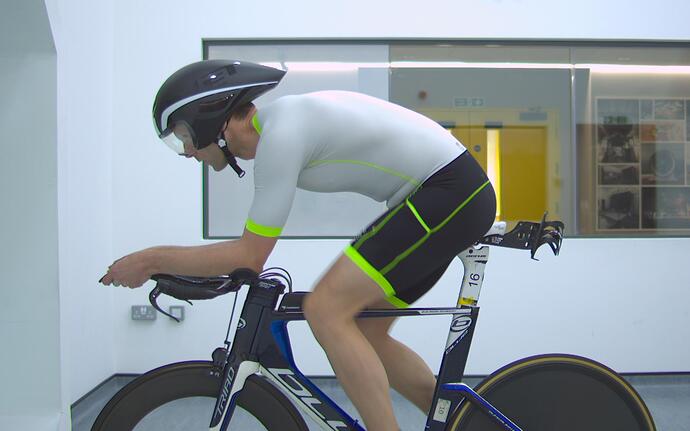 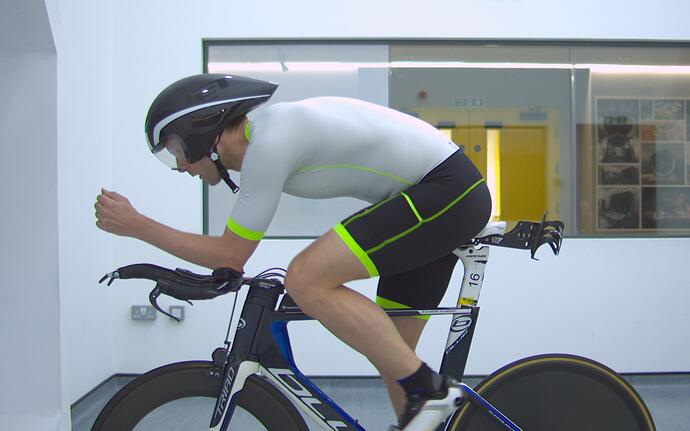 Eyes are pretty much the same angle, just lower