since the clocks have now changed I don’t get much chance to run with anything resembling day light so im currently using my trust Pretzl headtorch. Its a decent one (about £75 off the internet) but I do wonder how I could improve my lighting situation, not neccesarily with a brighter light but more in having a back-up if it ever fails and also as a second light source might help see depth, shadows etc.

What does everyone else use besides a headtorch. Do people carry a hand held and turn it on/off selectively or maybe some sort of wrist torch? I do run canal tow path and some lighter trails so there are parts with no lighting besides natural light and be nice to make it is risk-free as possible:)

I’ve seen people with LED vests, that also have a directional torch attached to the front.
I do not know what they are called, or where to find them, but I want one, as I cannot stand head torches!

I tend to stick to lit roads/paths and do multiple laps, very boring.

Personally i’ve never had a problem with a headtorch on its own. On longer runs i tend to have a spare battery in my pack, but that’s about it. I’ve never had trouble with depth perception etc and do the majority of my nighttime running on trails and rough ground.

Personally i am not a fan of holding anything in my hands (other than poles, when necessary). If my torch did fail and i was solo, i guess i just see the chances of that as being pretty remote. And i’d be able to scracth my way back if absolutely necessary.

Popular in our club. I have one and prefer it to having something on my head

I just use a headtorch and there are no street lights where I live so it’s all in complete darkness. I don’t do anything overly technical so find a fairly cheap Alpkit more than adequate (I generally use it on the less bright of it’s 2 continuous settings)
It also has a flashing red light on the back to make you visible from behind which I find reassuring too.

Usually headtorch only, I have occasionally carried an old fenix torch to use handheld when I need the extra power (only a couple of hours max runtime) which has been handy for fell running, downhill, sketchy sections and sweeping around for direction finding.

I’ve got this as a secondary light 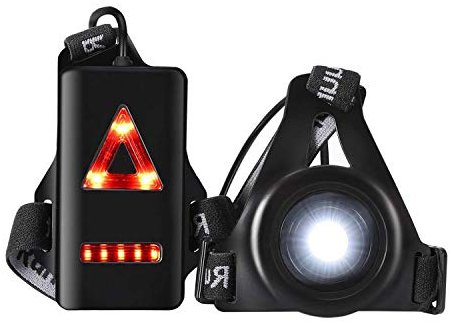 Or the unnecessary purchase did

cheers guys. GB makes a good ponint. Maybe I could just upgrade to a higher model with replaceable battery:)

The body lights look decent too though! Might have a trip down to Decathlon this weekend:)