Just bought this app after seeing it get good feedback on here… I’ve never had a professional fit, so no comparison, and understand that this app may well, at best, only get me an OK aero position, but won’t offer the experience of a good fitter in balancing position with ability to be comfortable over hours, and to generate power… but its an interesting starting point for under a tenner!

All that aside, I am planning in playing around with it on Monday, and seeing what it throws out… if I make the effort to screen grab along the way, is anyone interested in me posting the fit on here as the app leads me through it in a series of updates along the way?

Thought it might stimulate some ideas and suggestions for others, as well as feedback for me, and some insight into the app itself for anyone else interested in it…I do stress though… I know very very little about this subject!

Interesting to see a before/after!

Definitely let us know how you get on. I’m thinking about giving it a go

Defo, I always think of fit as an evolving thing that you carry on tweaking over time so always looking for any further insight.

I had a quick spin out on the TT first thing, thinking that i’d get a ‘before and after’ comparison data set for power at set speeds, but it was clearly too windy, so just used it to check bike over.

Then, onto setting up for the base line data from BFF

Its challenging gettng everything in the right place for the app, but patinc will get you there… I ended up with a really heath robinson set for mounting my phone using my bike maintenance stand, an old clip aerobar, and a handlebar phon mountclip… worked a treat! 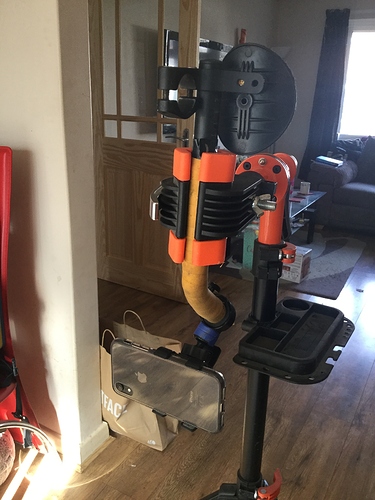 The I did the assessment. My numbers weren’t too bad, with my knee angle a bit more conservative than I thought, but my torso angle OK 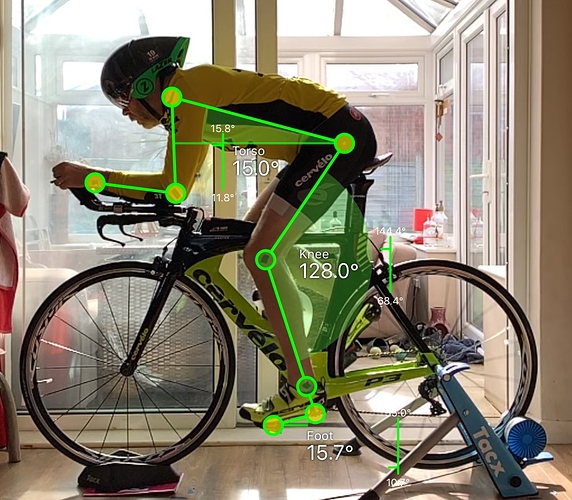 I initially chucked my saddle forward 20mm, which gave me 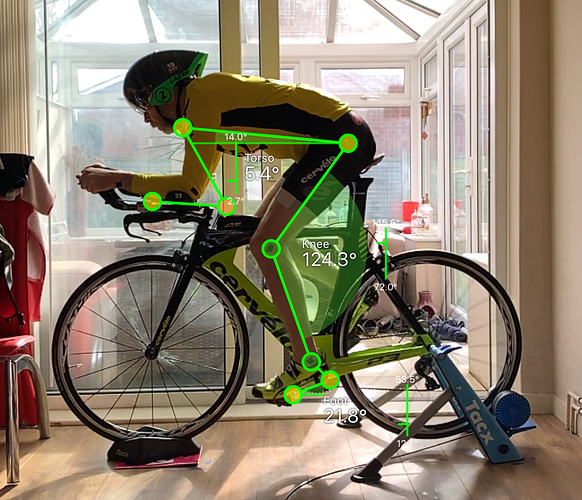 Then also moved it up 20mm 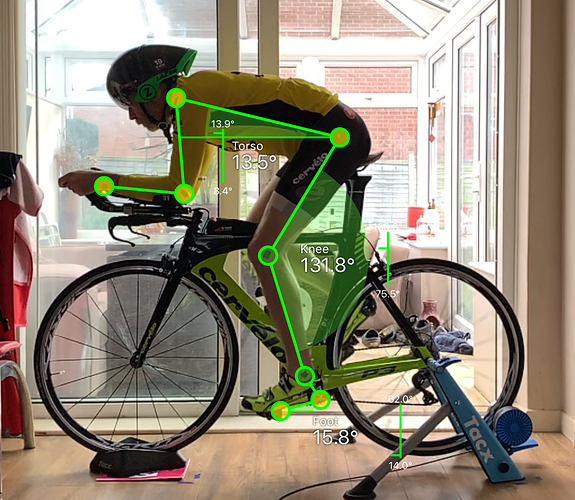 and finally, lowered the stem by 20mm and moved the bars forward 15mm by playing around with a spare stem with a big drop, and moving spaces in the stack about… which gave me 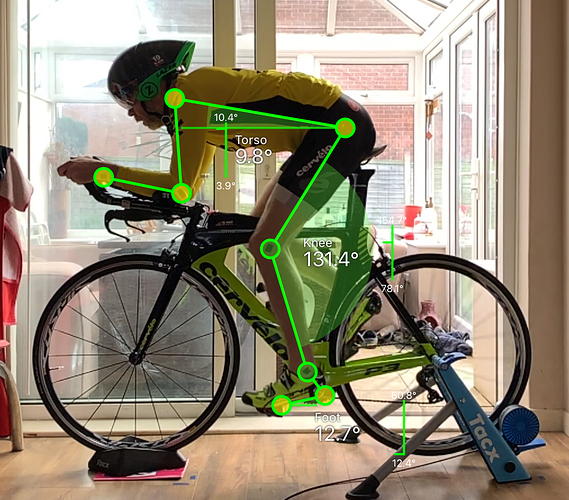 My key measures all look better… knee angle a bit higher, but still well within the sensible range at 154°, hip angle actually increased by 2° in the more aero position, Torso angle a lot lower by 8°, and knee moved another 20mm in front of the axle.

I think my back looks flatter, and i’m lower atthe front by some way so hoping it’ll be quicker.

Had a quick spin after, and it felt comfortable.

Will keep playing to see if I can squeak another small gain here and there.

Overall, the app is great. Its a bit clunky in places, and you’ll need to spend time working out how to use it, but once you’ve got that sussed, it works really well. The image recognition is really quite good once you’ve found stickers that are clear enough (I ended up using bits of insulating tape)

Finally, here’s a before and after… 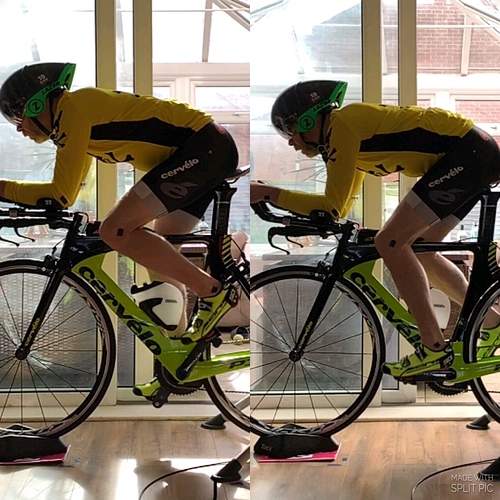 It looks nice, back looks a lot flatter (wasn’t bad before either). I would say that you have gone pretty aggressived for a long distance, and suspect that your shoulders may ache.

I had good experience with Bike Fast Fit, and know that it does work pretty well

Yeah, i’ve done the grand sum of 1 mile in the new position, so a bit too soon to see if its viable for any distance yet!

The initial position was one I set up for a 70.3 originally, as a slightly more aggressive option for that distance, and upon racing with it, had a great ride (2:34), and felt fab running off it… so i’ll be interesting to see what this new position is like in the real world. I’ll get out there and give it a go soon at a sensible distance… i’ve been using an old beat up PlanetX TT when i’ve gone outside on a TT outdoors over the winter, but weather is getting good enough to venture outdoors on the Cervelo soon I think!

In all of your pictures showing your knee angle the pedal is at an indeterminate position, neither top or bottom of stroke. Everything I’ve seen measures knee angle at maximum extension so I’m not sure how that is arrived at.

When the going is fast, turtling your head to get the helmet tail level with your back, and then shrugging your shoulders in as tight as possible will help to minimise frontal area and will give you free speed. Wish I could maintain the turtling and the shrug for the full 112! But doing it when you’re on a fast part of the course will give you more benefits than doing it on a slower part…

It calculates (and shows you) knee angle at every point in the pedal cycle, including 180°, where the maximum angle is achieved. The pics are just a random shot at no special point in the cycle.
Max knee angle in the new position is 152° 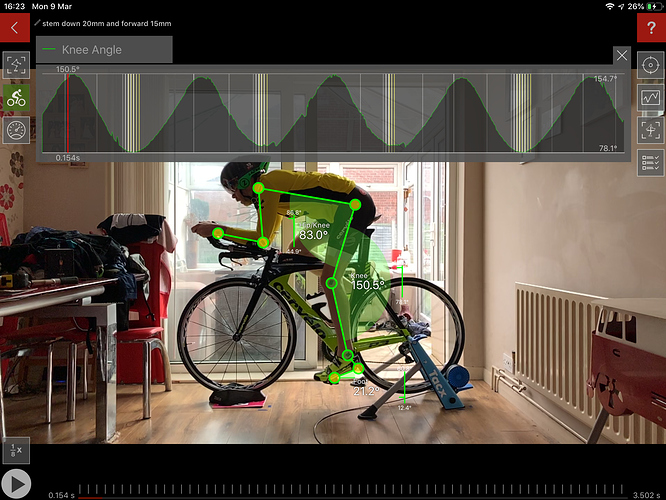 When the going is fast, turtling your head to get the helmet tail level with your back, and then shrugging your shoulders in as tight as possible will help to minimise frontal area and will give you free speed. Wish I could maintain the turtling and the shrug for the full 112! But doing it when you’re on a fast part of the course will give you more benefits than doing it on a slower part…

After looking for quite a while, I suddenly discovered a supplier in the Netherlands who had the long tail in stock for the Lazer Wasp Air helmet in size small, so ordered one…arrived yesterday, and I think its going to suit my position really well. 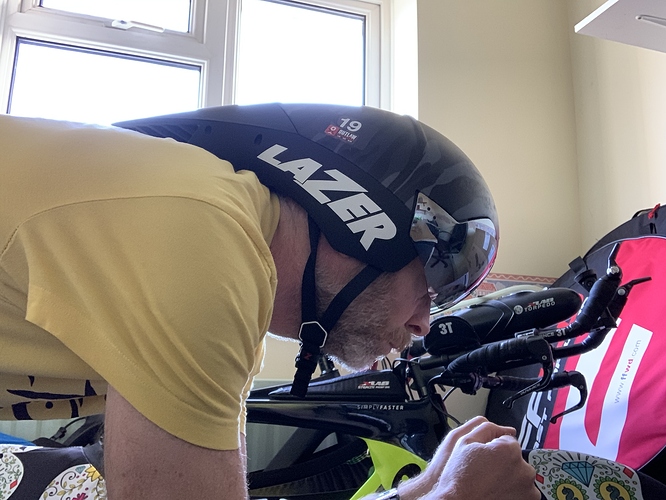 Absolute bargain to add that to my armoury for thirty odd quid!

Looks brilliant! Just avoid looking down… then the tail goes up…

yeah, doubt i’ll be using it for a full… (alhough, i’d like to try a few rides with it first before I firm up on that), but feels like it could be great for a 70.3.