So a wee race report about the event this weekend.

After a poor season so far with a below par showing in Hamburg I was keen to have something else to get my teeth into. Having declared a city as not meeting requirements, the brunette also wanted a ‘summer holiday’, which I think is code for being near the sea. Some google-fu showed me a Challenge half in Mallorca around half term, which seemed to tick some boxes.

A bit of a mixed build up to be honest, some consistent training but definite symptoms of over training needed a cut back so no real build and taper.

Peguera is on the ‘other side’ of the island (west coast above Palma) to the IM courses and the main cycling hubs. It’s a bit of a German package holiday place but nice enough and plenty of cheap accommodation, good beaches etc.

Challenge create a great atmosphere and the whole thing is well laid out right next to the beach.
The course is a one loop sea swim, two loop bike course to the other side of Calvia and a four laps of the town for the run. Transition is the back of the beach, neat, tidy and well set out.Simple right?

So the day dawned. Did I mention the 9.15 start? Bliss. And the sea swim awaited, with a brisk wind, something of a swell and white caps all over the place. Usual rousing chorus of Eye of the Tiger and the Final Countdown we’re set off in mass start AG waves. The swim is normally my good bit and I’m pretty at home in the water. With the waves coming in strong I dolphin dive a bit, then even duck dive as I get out of my depth, except after a couple of duck dives the big waves don’t really stop coming. So I give up on duck dives and try to settle into front crawl. And it’s really not working. Whenever I try to breath a wave crashes into my face and I get a mouthful of water. Back to breaststroke it is then. When I see a gap in the big waves I try some kind of madcap front crawl, breathing everystroke, as if I was 5 and learning to swim again. Then I get smashed and it’s breaststroke to recover. At this point I can’t really sight or see what anyone else is doing so I just plough on.

I’ll be honest, if this was a full IM I might have just even swum to support boat.

Eventually the turn boy leg came and the waves came on sideways, with a bonus of being blinded by the sun, then the turn back to the beach. Finally I could swim again and find a rhythm, getting picked up and taken into the beach by the swell. Visibility was still poor but you could sight the top of the exit arch quite clearly above everything else.

Getting back to the beach I just simply felt grateful. I was battered. To paraphrase Tyson ’ I had a good swim plan until the waves punched me in the mouth’. My time was recorded as 35minutes but I think that was taken up the beach after I had stood still for a minute.

A bit of composure in T1 and off we go. But no one had told me about the ninja warrior bike mount. The 25deg carpeted ramp to get to the bike mount was an unusual added challenge lending itself to some Jeremy Beadle esq moves… 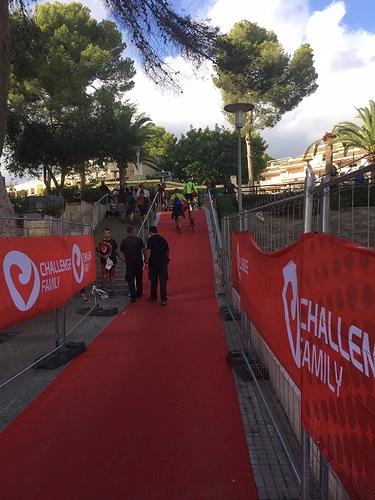 Onto the bike. Which went up, and down, and up, and down. Good roads, mixed support (some all nighters from Magaluf were a little bemused as we rode past…). The ascent/descent to the highest point was a little hairy, they had a coned a narrowish windy road to split the sides and several times on the first lap people overshot the corners, myself included, so whilst I felt in control I must apologise for the brown trouser moment I must have given the triathletes coming up. I thought It was a tough course for half, which belied it’s friendly location. There was very little drafting, lots of people on road bikes with clip ons. 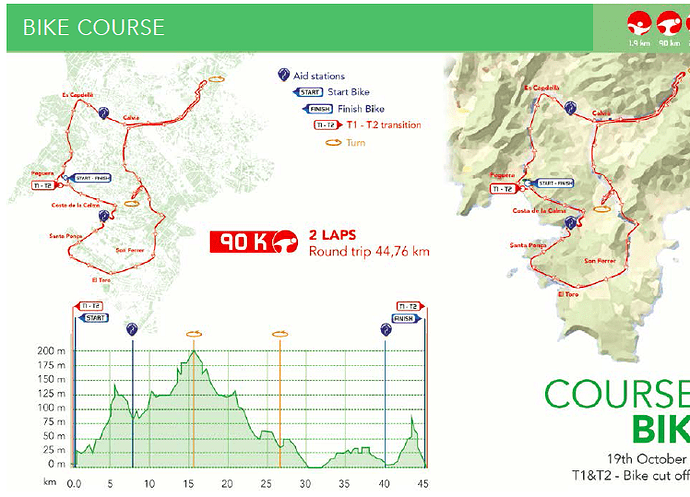 2.46, split almost exactly as 1.23 and 1.23 which I was pleased with. My power data seemed very out and my HR just wouldn’t settle but my legs felt good.

I thought the run would be ‘just a run’. But it went up, and down, and up, and down. And each lap had 5 dead turns, which in 5ish KM is quite a lot. Think of a wobbly starfish.
I started to notice a theme here. 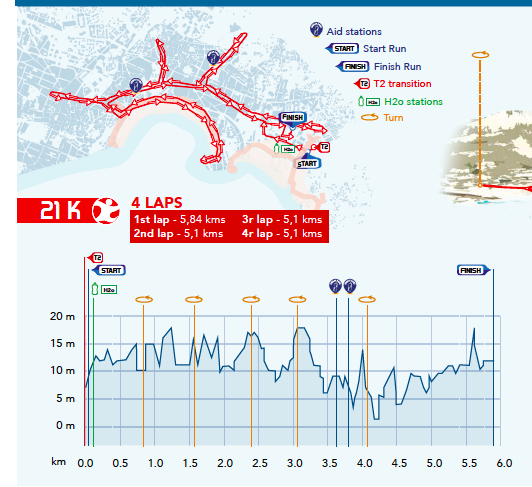 I have to say, for me, I shot off. My green Next% gleaming in the sun (and quite rare in this crowd). I was trying to hold splits between 4.30 and 4.40 depending which bit of the ‘rolling’ course I had just done. About half way through I started to feel sick, I’ve decided the gels I use don’t work for me in the heat or at high effort levels. The Maurten gels I had for the run managed to stay down though. I realised that 5hours was never going to be in the bag after my swim but I could at least give it my best shot to finish strong. I even caught the brunette napping on support duty as I wasn’t expected. My strategy of simply pouring as much water over myself at the aid stations seemed to be working and I was overtaking more than I was being overtaken.

The last couple of kms my legs finally started to go and full gas simply limited slowdown. Someone somewhere has a photo of my gels making a reappearance after the line. For me a well paced race. Stopped the clock on the run at 1.36.42, and 5.07.21 total. 22nd in my AG.
182nd Overall. Finally something to smile about. There is something cathartic giving a race a good shot.

PostScript.
I’m not sure where to write this and starting another thread seems indulgent.

I found out much later in the day that a British competitor died during the swim. This is awful news and terribly sad. My thoughts were with his family who are also out here.

I don’t know any details and I only found out because friends in the UK had read about it in the papers at home. No one here seemed to be aware of it and I heard nothing in the restaurants and cafes after the race. Beyond my comments on the swim, which stand alone as they are (although I don’t have many ‘very rough swims’ to compare it to ), I am not going to speculate further. Be safe.

Thought and prayers to the family and loved ones of the poor departed.

Sounds like a really nice Triathlon, glad you had fun as well. GI issues could be from drinking too much sea water

Really sad about death, unfortunately this is relatively frequent in triathlons. Given what you describe about conditions, I am surprised it wasn’t shortened, maybe Challenge events have a higher risk tolerance than Ironman

Thanks both. @Matthew_Spooner - good point about the sea water. ’ve found out I was 3xx out of the water so perhaps made more of a fist of it than others, given my final position. My experience was ‘my experience’ though.
Overall I did a tough swim, my bike was around 200W or slightly over if BBS is to be believed - IF of nearly .8 and I ran a 1.36 off the back of it - as good as I could ever expect.
It was a great event and I think Challenge create a better atmosphere than IM

I’m surprised the sea was so rough in the Med!

It was pretty windy, and the said in the race briefing they thought the swim would be rough. Maybe it was a wind direction/time of year thing. Although previous years the swim has been very calm.
The results site isn’t great to use but it seems a lot of the top 10 in my AG were over 30mins so others were definitely having a (somewhat) hard time of it.

Obviously I’d have caught you on the bike

Slightly wiggly roads for a nice chat but we could have made a go of it.

That’s the trouble with some of these events, they make it so unsociable with the blocking rules

We found an opportune moment in Hamburg, before we hit that windy out & back again! Not long after I left you, I said something to a German guy as we approached the dyke road jokingly asking if we could get off our bikes yet; when he responded as he re-passed me a few minutes later he had to shout “one hour to go!” at the top of his voice to be heard!