Surely Revs vs Speed is defined by the chainring not the crank.

You are correct but you can crank a bigger gear with the bigger levers. Its swings and roundabouts. The pursuit guys are sticking silly length cranks on so they can get on top of a bigger gear far easier.
Its one of those 0.1% things that varies from person to person and is hardly noticeable for the vast majority.

Yep, its the standard confusion between force and power…

a longer crank will require less force to turn, but will take more work, as its a bigger rotation, so generates similar power, as power is a function of force and time.

Seems to me that it’ll boil down to whether your bias is towards force generation or work load production… or in simpler terms, whether you prefer to push hard, or whether you can push fast!

But certainly less lower back stiffness, basically none.

I think the hip angle is the main one it’s advocates talk about. I know Mike Burrows always recommended very short cranks, less than 165mm if you could get them, although I think he rode a lot of recumbents.

Phil Burt as well, he mentioned them to Wiggins just before his hour record and he put them on the bike straight away, and Wiggins is taller than me.

He did suggest I try 165’s and I’ve got a set but like my SRM which aren’t really changeable. I seem to recall he thought it might make things easier on the run if my hip flexors weren’t too tight from 5 hours on a TT bike.

Must admit when I’ve tried them before I’ve not really noticed much, but I think my Wattbike is 170. I keep meaning to have another go, I’ve got a 105 set of 165’s sitting BNIB in the garage

That’s my justification for riding on 165mm

I’m not that tall, so a shorter crank gives me the ability to lift the saddle that further 10 or 15mm without overdoing it on knee or hip angles.

Like you though, not sure that in truth, other than position, I would be able to tell the difference by feel

I’d have thought a shorter crank would need a lower saddle with the pedals being further away?

At the bottom of the pedal stroke the pedal is closer to you.

I think the as the pedal reaches ~2 o’clock it’s slightly further away and the hip being more ‘open’ gives the quads a mechanical advantage.

Sorry was thinking about the top of the pedal stroke.

There is plenty on Slowtwitch. Shorter cranks came in vogue, the year before the top 10 Kona finishes had 172-175mm cranks & the year after everyone had 5-15mm shorter and it has stuck since. Not sure with N+1 you could show a conclusive difference. Reduced hip angle means you can run higher drop at the front for better aero so lots of variables to compare. If you are short then I would say it is very likely you would do better on shorter cranks than you likely have though.

Snake oil or a good investment…?!

I would say it’s worth the investment. Not much choice below 165 though and you probably should be looking around 155. I picked up something second hand to give it a try.

If you are short then I would say it is very likely you would do better on shorter cranks than you likely have though.

That’s me that is. I looked at the configs of the females at Kona and realised I should probably move to 165mm cranks.

These are brand new with fancy expensive bb.
I have approached an engineering company to “ shorten “ them…!? 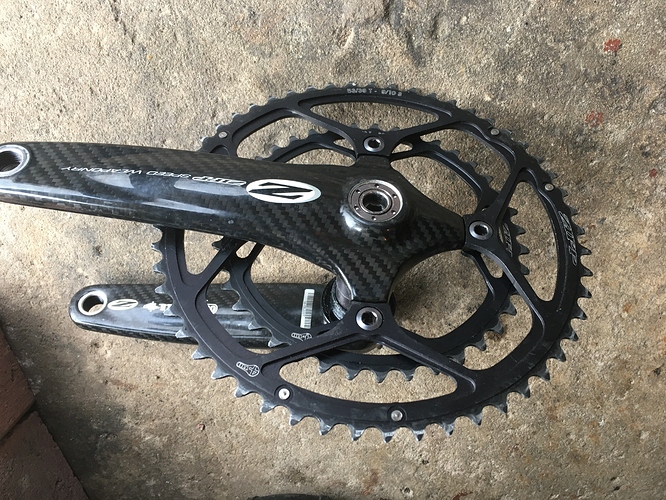 Just to pick up on the physics in this thread:

For any particular speed e.g. 40 km/h, the power you have to put in to the bike (the energy per second) is the same whatever cranks you have on and whatever gear you are in (ignoring tiny things like chainline efficiency).

The cranks also have no effect on the RPM needed for a particular speed in a particular gear. If you are in 54 front and 15 rear and doing 90 RPM then you’ll be doing around 40 km/h on any cranks. Try Sheldon Brown’s gear calculator if you don’t believe me. Doka, if you’ve reduced your rpm then either you have slowed down, or you are choosing bigger gears to compensate - but that’s perfectly possible.

So there is no gain from different cranks in terms of the physics. The biomechanics is a whole different story but it becomes an empirical question, I think.

I prefer 165 cranks on my TT bike and 170mm Cranks on my road bike, but to be totally honest the difference is hardly noticeabe, and riding 165’s on TT bike is probably all in my head. However, I can really notice when riding a bike of 172.5.

Because I have some specific needs due to my back. (I need to be 'long and high) I have a TT bike, which on paper is a size too large (56 P3) but it works for me.

Downside is that the seat mast is low in the frame and doesn’t allow a massive window for adjustment. For this reason I ditched the 175mm cranks that came with the bike. (those made of cheese FSA Gossamer shite) and went for 165mm Ultra cranks.

This meant I could raise the seat post a little and open up my hip angle. I have 172.5 on my main road bike, 175mm on my Focus at Mum’s and I have no idea what’s on my mtb.

I swap between all the bikes without noticing any difference at all. It’s very easy to adapt. 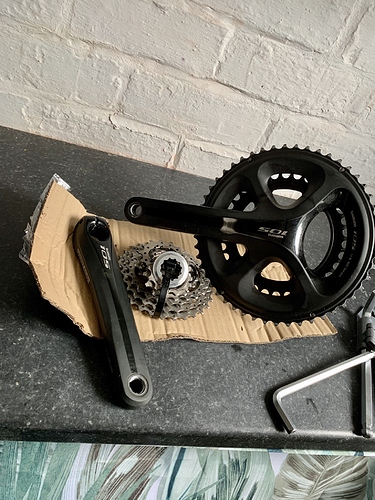