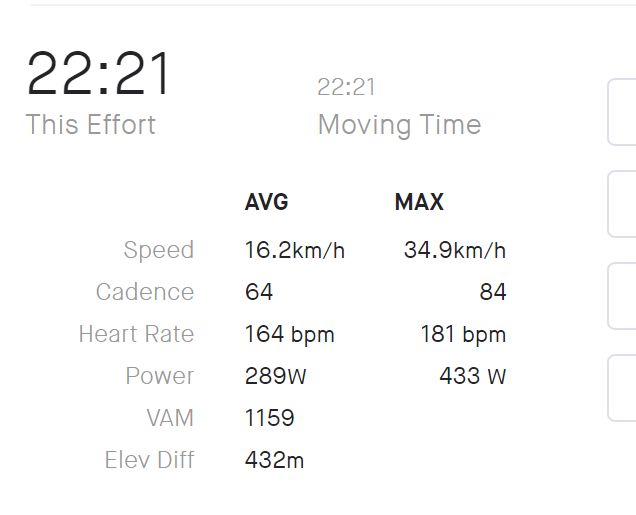 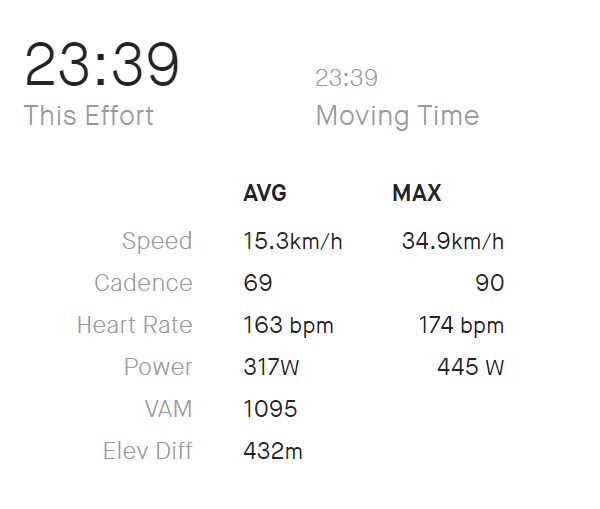 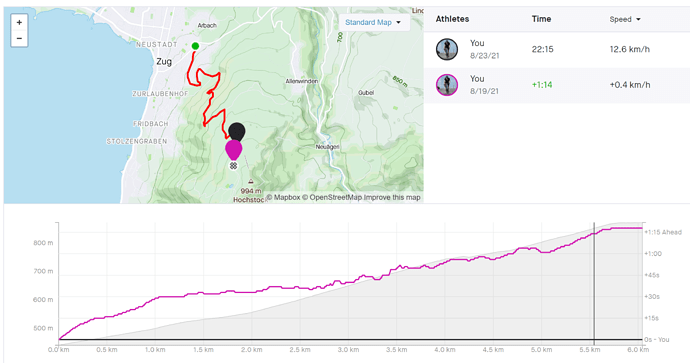 The climb on the Cervelo was later afternoon on a pretty hot day avg 25 degrees. The Climb on the Tarmac was early morning avg 15 degrees.

That’s really interesting. I wonder how much difference the tyres make, I think the Vittoria tyres are a bit faster than the Conti tyres. On a pure hill climb where speed doesn’t get above 10mph I guess weight is more important than aerodynamics, but for a hilly course with ascents and descents then I suppose the gains you make on the flat and descents because of having a better aero bike that’s slightly heavier, outweigh the gains on the ascent due to having a very light bike. You see bike changes in TTs with summit finishes - they change from aero to climbing bikes. Did you have the same clothing and helmet on?

Shows how there’s a lot more to it than maths. Things the Best Bike Split are a nice idea but often the figures they produce are not reflected I the real world be because there are so many factors.

And as some who is is regularly even when fit in triple figures in the KG scale, yes weight matters

Had exactly same clothing and helmet, the only difference was shoes. On the Cervelo, I used my S-Works road shoes, which are very light and stiff, on the Tarmac I used S-Works Tri shoes with Mid foot cleats, its something I am trying out at the moment

Tarmac pisses all over the Cervelo on the flat, 625 wheels and better aerodynamics. Also, Tarmac descends much faster than Cervelo, the super stiff frame and aggressive geometry make the Cervelo very nervous at speed

Fully agree with you, 2kg should make a few seconds difference, I have to think that frame geometry and stiffness also contribute.

Yikes that Cervelo is light

IIRC from Zwift your weight is 66kg? So is the comparison between a 71kg bike+ rider, and a 73kg bike+ rider? That’s a 3% difference.

Someone may want to sense check those calcs

But just from a physics point of view that feels much more than you’d maybe expect from the 3% weight difference.

15% does feel too much as well. I am wondering if the PM was reading correctly on the Thursday. My HR was pretty much the same as today but power was 9% lower.

One difference was crank length, on the cervelo I was using a 172.5mm crank, while I had a 165 on the Tarmac.

My recent thinking on Kit has been:

I could eat less crisps and go faster for nothing.

Yikes that Cervelo is light

It’s been a multi year hobby to see how light I can make a bike without buying new parts. I think that the only “new” items are the tyres, the chain, schmolke handlebar and seat post, everything else is second hand. However, bike has to be rideable, I could go for track tires and aluminium cassette and save 200g, but would end up with a bike that is not useable.

Quite a difference in air pressure between 15 and 25C, that will account for some of the difference IMHO

Although the weight difference is smaller than the time difference, is the affect of gravity on that differing mass linear? My days of applied maths and physics is a world away so can’t remember.

I think that rotating mass is more significant, so wheels, crank and shoes make be important

So many factors could affect it. Bike geometry, stiffness, handlebar stiffness, shoes, cleat position, temperature, air pressure, road temperature, amount of food in the stomach affecting how blood is used in the body, small changes in the wind.
Why did you decide to move the cleats back? How has that been going for you? I’ve been wanting to try that to see if it helps conserve and protect calf muscles and Achilles’ tendons… I guess making this change would mean that the saddle has to change height and fore/aft position?

That’s a myth apparently. I can’t remember where I listened to it recently, but if you take a wheel, any disadvantage created by the inertia on one side of the wheel that is rotating, is compensated by advantageous inertia on the other side of the wheel that’s going in the other direction at that same moment in time. So they said it cancelled out, and it’s just the effects of the absolute mass that you are taking up a climb that matters.

TLDR - if you add 1kg to your back pocket, or 1kg heavier deep wheels, the effects are apparently the same*

*purely in w/kg. Having the weight in the wheels is actually better, as it lowers the centre of mass for handling, etc

When I did my ride around Switzerland, I started to suffer from pain in my right achilles, luckily I was able to protect it and only needed a couple of weeks to recover, however, it was an incentive to give mid foot cycling a go.

I am only a couple of weeks into mid foot riding, but so far it is encouraging. I havent experience any ah ha moments, but it doesn’t feel wrong either. I think that on the flat or rolling section on a TT bike riding at 260w @ 70 rpm it feels nice, and possibly a little smoother. On climbs, I am used to ride alot standing, I find that I am sitting a little more, probably 50:50. It does put noticeably less stress on the achilles

Biggest issue is clipping in as cleat is in a different place to what I am used to. There are 2 positions you can use, I have initially decided to go with the less extreme position

I’ll probably give it a go in Challenge Roth in 2 weeks, partly because I want to look after my achilles

GCN did a video on it. They were sticking weights on the wheels. From memory it wasn’t the most convincing experiment I’d seen.

Difficult to see from a the low res pictures, no actual broken down power data etc. but it looks like the majority of the time gained was in the bits running south the first 1km did 30seconds, then no realy gain until 3.5km, then the big gain again from 5km.

That is possible and a reasonable explanation