First off, I like Sport Pursuit. I’ve spent a lot there, and their customer service is always good. I’ve even participated in some of their market research days on their in-house brands.

Anyway, last night I received this direct from Huub… 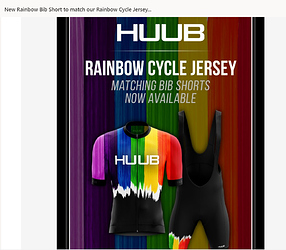 This morning I receive this from Sport Pursuit… 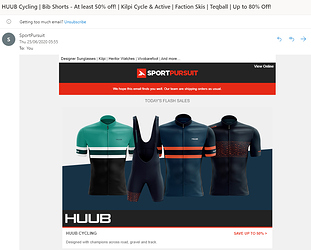 Clicking into the Sport Pursuit page, they have that brand new jersey Huub literally just released (which they did … it definitely wasnt available before). So, on the surface, that’s great. Sport Pursuit have clearly created an access model to Huub products that means they get new releases in real time. 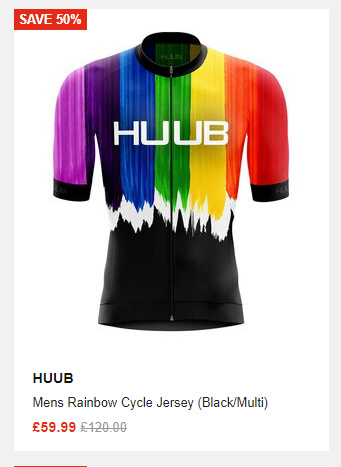 But it’s the “save 50%” claim that irks me. It’s nothing of the sort. From the Huub website… 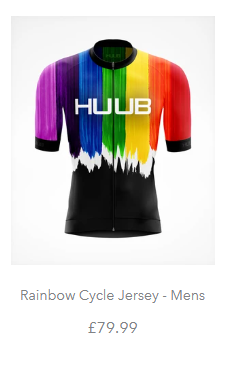 As I say, it’s pretty amazing that they’re already able to offer a brand new product at 25% off RRP, but why do they have to make false claims about the discount on offer. Isn’t this the type of practice that Sports Direct have been fined for? It just disappoints me that they’re trying to be misleading in this way.

Am I being over-sensitive here?!

This happens with everything we buy, my mate ran a dfs years ago … they don’t expect to sell anything at the original price but have to advertise it for a certain time then sell it as a bargain … apparently !?

People who run these type of companies will make money off your dead Mum…!

It’s only because your into this lifestyle that you actually know this… they don’t care about you or your wallet … they just want what’s inside.

Obviously I hope your mother is alive and well!

Cool off with a swim is my advice

I would email Sports Pursuit and ask them to change it as it isn’t correct.

Am I being over-sensitive here?!

No, they all need to stop deceiving us.

I kinda like the top. But yes, I agree with you @stenard. Further to what @Mungo2 said, there is normally a period that they have to sell the product at the ‘full’ price for x weeks at at least y% of stores. I recall learning it in one of my commercial law modules at uni many moons ago, i don’t recall the exacts though. My mind is telling me it was 8-12 weeks…

I guess the argument is it’s the same Jersey (as they’ve been selling for months/years) just a different colourway. So they’re justified in claiming the original price as ‘rrp’.

I recall learning it in one of my commercial law modules at uni many moons ago, i don’t recall the exacts though. My mind is telling me it was 8-12 weeks…

Pretty sure that’s about “was X, now Y” promotions, this is saving against RRP, so the relevant ASA is about ensuring accuracy of the RRP, so they would need to justify it - the fact it’s available from HUUB for 80 would be a count against, are there other retailers for it? Are they at the 120, HUUB simply saying they RRP at 120 is not enough for sure.

Oh, and there’s https://www.asa.org.uk/advice-online/recommended-retail-prices-rrp.html which doesn’t actually help much other than say “be careful”

Still a decent deal but a shitty way to go about it.

It isn’t new though, they’ve been doing it for years.

Ah yes that rings a bell actually. Twas a long time ago!

But like in pubs where most meals are £10-14 but some crazy stuff like steak and lobster tails is £28. No-one ever buys that but it helps lift the price of the rest of the menu?

And on menus where they leave off the £ sign and psychologically it’s easier to buy the expensive items. And don’t get me started on wine lists.

Idea for my next bike conversation with my better half:
Can I buy a new bike? It costs only xthousand (blanks). Its the 2nd cheapest. It’s much cheaper than their pro model which is over double, so must be a bargain. Oh and it’s 50% off RRP from when it was advertised last week.