I used these wipes to give my rims a quick clean before trying to attach a wheel cover. https://www.screwfix.com/p/zep-commercial-multi-task-wipes-white-100-pack/4371F

The tape seemed to stick fine to the rims, but came away from the cover itself. I then gave the cover a good clean with the same wipes, and now the tape won’t stick at all.

They appear to have made it slightly greasy. Pulling my finger across the inside of the cover (where I didn’t clean) there is some friction and I get a squeak. But on the areas I cleaned it’s nice and smooth and slidy

Any ideas how I’d clean everything up to make them as sticky as possible for the tape?

Wonder if there is some sort of detergent in there which has formed a layer and is stopping them sticking. If they were my wheels I might be tempted to try giving them a wipe with white spirit or similar, to see if that helped.

Which is not the same as advising someone else to do it to their expensive wheels!

Google suggests that white spirit can leave an oily residue?

When I waxed my chain I used white spirit first to remove factory lube but then did a wash with meths afterwards (to remove the oil?). Perhaps I need to do the same?

Yeah try some IPA or some panel wipe

I did the white spirit, then meths and then wipe/scrub with paper towel and that seemed to get it back to the original state.

When I re-attached I made the following changes:
Much less tape on the joint:

Single piece of gaffer tape on the back. Left this a little short of the cassette end to help clearance.
Single piece of tape on the front, I did not pull this tight, especially when wrapping over outer edge.
(I had about 3 layers front and back last time, maybe more at the edges due to overlap).
Made sure the zip tie attachments fell between spokes (last time they were resting against the spoke) and attached these to spokes on other side of the rim - to increase clearance.
Do the zip ties up very carefully, too tight and it causes another part of the cover to kick out (reducing clearance to the cassette).

When taping the rim I started away from the joint, and when overlapping (only a small amount) at the end deliberately went more over the rim than going back over the tape. This prevented 3 layers of tape over the joint/rim join…

My findings:
The tape doesn’t stick to itself very well, avoid overlap where possible.
You don’t want the tape tight on the cover joint, especially when going over the edge. This puts stresses on the cover and therefore almost seems to cause the tape to pop off.
Less tape = more cassette clearance.
I’m still not 100% convinced by the electrical tape over the cover joint, but I’m quite confident with the gaffer tape on the other side. It seems fine around the cover/rim though.

What I might do differently if doing again:
I think I might use gaffer tape on the front of joint. Would look much less pretty and would be more of a faff to remove and clean up (I found it left a lot of residue). But it just seems to stick so much better.

If you have any, try some disc brake cleaner. It evaporates and doesn’t leave any film.

Interesting what you say about taping the join. The pictures on ebay seem to suggest the outside join is not taped at all? How deep is your rim? The wheel I would want to use is very shallow which could make rim taping awkward, and not sure if the shallow rim would make it more likely to bow and interfere with the cassette/chain.

My rear wheel 100mm deep. you specify the depth of rims when buying and the covers come cut to size, reckon theyd say if not deep enough. With the eBay Vitesse kit the outside join around the circumference of the cover does need to be taped. The instructions recommend just a single layer of electrical tape.

I still haven’t been brave enough to actually ride with it - first it was too windy, now I’m just concerned about looking odd

This is one of the images from the eBay listing, which clearly shows the tape joining the cover to the rim. I’ve got 90mm rims, and this part of the install was easy and seems to work well.

The challenge for me has been the join along the radius of the cover (required to give it the slight dish effect). 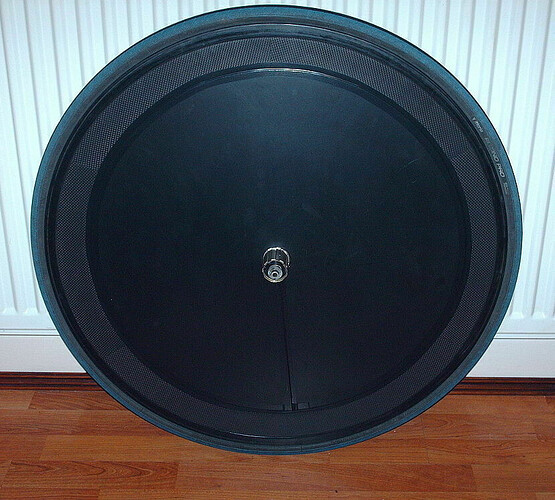 I meant the radius join. Doesn’t appear to be taped on the outside, although @fruit_thief mentions it is at the edge, which makes sense. I assume it is taped on the inside, and you arrange the overlap so the rotation holds it together rather than blows it open.

Taping to the edge will be tricky on my lower profile rim, but the seller has told me it is possible.

I reckon you’d need a minimum of 30mm rims, as that includes the brake track and the top of the rims are curved. But suggest you message him (Vitesse) on eBay, he seems pretty responsive to messages.

The guidance is to tape both the inside and the outside, and in the instructions he actually suggests multiple layers on both.

That’s what you do first to give it the dish effect, and then you tape it on the rim. You can see in the above photo in 6 o clock position that there is overlapping tape from the radius join and then the rim join over the top.

Looking at the other colour covers he has on the site, there doesn’t appear to be any tape all the way along the radius on the outside, just at the edge circumference. Unless the tape is clear? 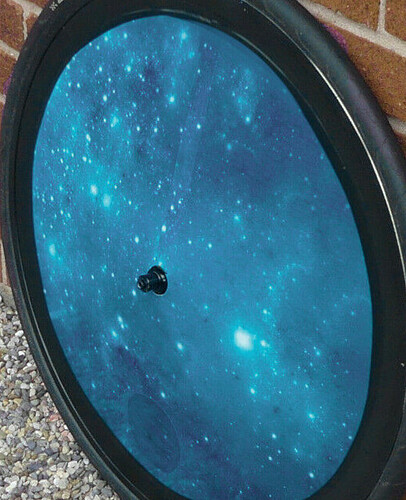 I think there is tape running to 12 o clock in that photo, it’s very well blended in though?! He provides some stickers with the same pattern as the cover, so assume there is tape and then the sticker over the top.

I have the carbon weave effect, but haven’t bothered with the sticker, just left the black tape. In fact I’ve only just now realised why the sticker was included in the pack

That being said, to be clear, when you are taping the radius joint this can be done completely in isolation off the wheel. You are not taping to the rim at this point, just the cover itself. You just need to offer it up to the wheel at the beginning to get the right overlap for the dish effect. After that you can take it away to tape up as much or as little as you like.

The only tape connecting the cover to the rim is around the circumference. The point I was trying to make is that you will end up with tape on tape when you get to the radius join.

With shallow rims the only concern I’d have is whether there is enough space for the cover to sit on the rim and then to have tape over the cover and rim when going around the circumference, without touching the brake track.