As a (silver) AWA atherleet last year, I’ve just had an e-snail

inviting me to the IronMan TM World Champs

Just checked, me too

The IM StG course was on my bucket list. Timing etc wrong for this unfortunately.

Yes it is a good course I gather, well for those who like gnarly ones.

So @Toyota_Crown are we going to be denim shorts spotting during the pro coverage on May 7th?

It looks like they’ve changed it a bit since I raced there in 2011, but still very challenging - cold swim, hilly bike and hilly run. It’s usually very hot by the afternoon and the whole course is at a reasonably high altitude.

I think it was about 14C. The lake is filled with melted snow. They allowed people to wear mits and booties in the swim because of the temperature.

The sunrise over Zion National Park was amazing, but the air temperature was flipping cold until the sun warmed things up.

How do you get this conversion? We’re at about a 1.34 exchange rate, so I make it more like £780, and I assume that’s before any active fees.

If I was in tri training, and not completely out of shape due to months of recurring illness, I might have been tempted despite the likely association with being a cheat way to get in, but the aforementioned takes away the decision.

I’m not sure I could ride 50k at the moment, let alone 180k. My TT bike is still in the bike box since flying back from Mallorca in October! And I’ve not swum in 2022

and sorry to hear about your sandbagging m8!

(cba would have sufficed

I was going to ask if you are okay!?

Been seeing bits and pieces on Strava, but notice you aren’t as active here over recent months.

So, does anyone care about this?
Or have I missed the chatter?

I see literally nobody of note is racing, or they’re out there, but ill.

Not even seen a “bike count” on the evil site.

All our chat has been on the pro race thread

Really looking forward to it actually!

How can you say nobody of note is racing? Or are you totally fishing in true Poet style?

No bike count yet, although Blummenfelts bike has been turning some heads Spy Shots of Kristian Blummenfelt’s New Prototype CADEX Tri Bike – Triathlete

Black Boris bike really with a bit of aero stuff

I actually had no interest in this; particularly with the timing during the day, and it not being Kona. Oh, and me not doing Tri atm.

It’s a shame so many of the top contenders weren’t able to race. I think had Brownlee & Frodeno been there, then Blu might have had a tougher time potentially chasing them down? Joe would possibly have started the run with the Blu group and run through to the podium; but who knows.

Morning!!! Not one for race reports, but other than just saying it was a tough day, here’s a brief run down

St George, sleepy kinda non- descript town, sitting in the middle of some pretty epic scenery.
Arrived a week out from the race, recced the swim a few times, fired off some scary guns
The race day experience was next level. The yanks do know how to put on an Ironman circus.
Swim for me was proper shite. I had no nerves on the start line, which was unusual for me. As soon as I’d got through first 100m I had a panic attack, couldn’t get my breath. This was unusual for me, but all I could do was breastroke my way for the best part of 400m just to calm down. I guess the sense of occasion got me. But hey ho, got it under control and then continued to swim strong. Sighting back in was a shocker, and I found myself going far too wide on the final approach.
I was surprised my time was 1:04. Thought I’d really fooked that up

Out onto bike. A great course, hilly from the start, the course map profile doesn’t really tell the true story, but we’d recced the whole course so I knew what was coming. I felt pretty rubbish on the bike. I picked up a cough early in the week (off the fella sat next to me on the plane-I think) tested lat flow neg the day before. But I just couldn’t get any kind of reasonable power down. Coughing my way around the course like a 20 Marlboro day man. BUT aside from that, what a ridiculously beautiful course. Think, roadrunner cartoon back drops!!!

T2, not much faffing, get in get out.

So you all know about the heat. 31-35 I think. Yeah it was hot, but the wind had also picked up, so ice down Tri suit, armpits, under cap, helped keep me cool. The course is basically up down x4 the first 5k is tough, but then you get some relief on the down, although my quads didn’t thank me. I had no pace in me whatsoever, but by this stage it was run to aid station, walk through, run to the next for the entire run. I was in ‘just get me home’ mode. My guess is at least half the people were walking in the latter stages of the run. Lots of handy looking AGers had blown their tits off and it was just a long walk home.

Running into an Ironman finish line never gets dull, but this was so special. It’s been a long time coming. A huge goal for me was to get to a full world champs, this was it. My day!!!
It was always about coming to experience this big event. Kona was the goal! But there’s absolutely no disappointment in having my day swapped for st George. I’m gonna say it,……. It’s Deffo harder than Kona and Lanza!!! I’ve done neither, but those who have, tell me. My pal Scotty whittlestone grabbed 2nd, 50-54. 11min off first, and he had a flat which took him 15’ to change!!! But he’s got his fancy Umeke bowl so he’s happy 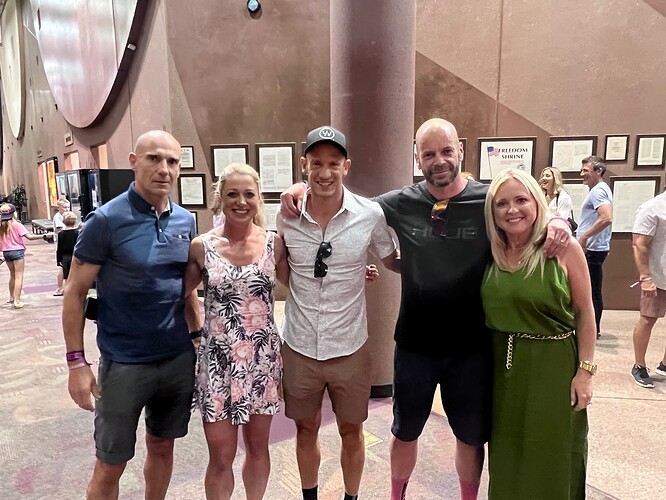 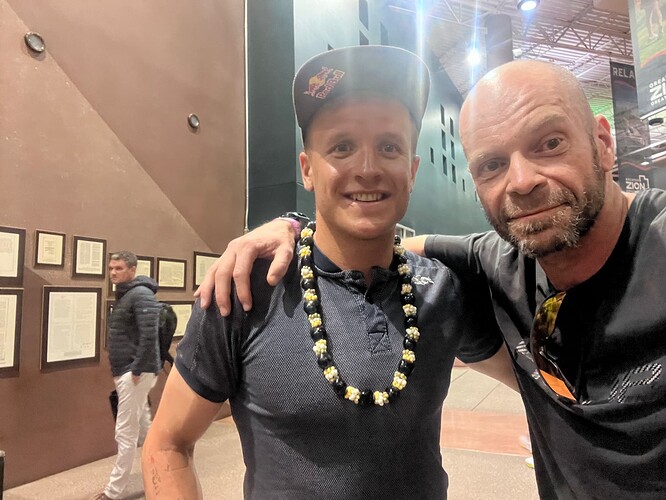 Kona roll down came in for me at the awards. I wasn’t there, wouldn’t have taken it. I’ve spent far too much wonga this week, and I’ve still got vegas to go!!!

You are an Ironman!!!

Love that you seem to have enjoyed it

You never know, you might win on those craps tables in Vegas, baby