Long way off, anyone tempted? I suspect qualifying from Europe might be easier, but maybe less slots.

Don’t fancy Vegas, but it’s not far away from the Grand Canyon etc.

Won’t mention Taupo, looks lovely but arse end of nowhere, probably not many hotels etc. and nearly 36 hours to get there!

Probably a bit early in the year for a full, for me anyway, really couldn’t get my head round all those long rides in the winter and no real O\W swimming until the race.

One of the things that puts me off Lanza, the early date & winter prep.

I did the full IM there in 2011 and it’s a stunning course. We flew into Vegas, stayed there for a few nights and drove up. It’s less than 2 hours easy drive. There seems to be plenty of hotels in the town, but it’s a slightly strange place (very Mormon😉).

Have they announced a date for it? The IM was the 1st week in May. The water was very cold (14C) and they let people wear booties and gloves for the swim. It felt quite cool for the beginning of the bike, but it got hot very quickly. I think it was in the 40s on the run and the original IM run course had 800m of climbing on it, so up and down the whole way. I think they might have switched to a flatter run course more recently. People were talking about the effect of the altitude 1-2000m above sea level, but I don’t know whether that’s high enough to have an effect or not.

I guess the championship race would be in autumn, so the water would be a bit warmer and the daytime temperatures might have fallen a bit.

I’d definitely consider going back for the full IM, but can’t see 2020 working for me, so maybe a long term goal for 2023😎

I thought the full IM was still May, but if it’s cold they might change that, a lot of the North American races for next year are still TBD for dates.
Jeff

An Ironman Marathon with 800m of ascent W.T.F!

The water’s cold because the lake is filled by snow melt, but I think if they held the race much later it would be too hot for the bike and run. The 70.3 champs are usually in autumn, so I guess the air temperature will have started to fall and the water will be a bit warmer too.

No way the Staffs slot allocation has rolled this far. I seem to remember getting an email saying it had closed anyway? 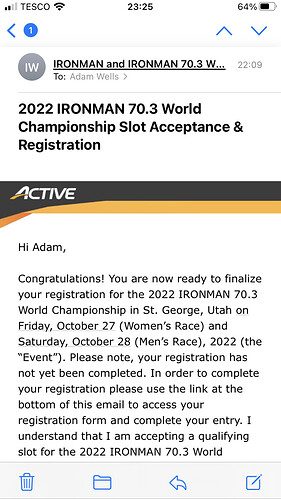 What are you going to do? It did look pretty good this year, and travel should be OK by second half 2022.

Few days in Las Vegas is a good sell

Would be the total opposite for me. I’d do anything to avoid Vegas!

Use a credit card, just in case

Have you accepted it, Adam?

I wonder if the email roll down process isn’t helping. After the race the adrenaline is probably still flowing and I think people probably won’t think it through as much.

Whereas when they’ve had a few months to think about it and work out full costs they might turn it down. Especially with the travel.

I’d still like to go but depends on the roll down.

I haven’t yet. The other half was genuinely too pissed last night. She would only entertain cheese on toast and schitts creek.

Come to think the slot available at Staffs was for Taupo so I’m not quite sure how they’ve gone about the roll down here.

I think I was 13th? M35 at Staffs so not miles off getting a slot under normal circumstances.

Term time race though so would mean a solo trip for me. Could make it as brief as possible with a Thursday/Sunday flight from Vegas, 3 night hotel and a hire car

Term time race though so would mean a solo trip for me. Could make it as brief as possible with a Thursday/Sunday flight from Vegas, 3 night hotel and a hire car

I know it’s a bit selfish, but i’d genuinely prefer that. It’s so much easier to focus on your race without having to worry about your significant others. Especially if yours are like mine and seem to rely on me to think about absolutely everything when we go on holiday (especially if it’s for somethign that’s driven by me, like a race). It’s like her powers of thought, planning and oversight just vanish upon getting in the car! Suddenly basic decisions and planning have to be taken on by me.

Then be told off at the end of the day cos they got lost and couldn’t find food!

Completely agree, the last race my wife came to was Cascais and that was a pain in the arse for her juggling two young kids

Initially I think I’d feel a bit selfish leaving her at home with the boys but we’ll see how she feels about it. If it was a European race it would be a different ballgame!

TBH I’m struggling to see how a trip to St George would be a good one for small kids. From what we saw, I can’t think of much to occupy young kids with in the area. There’s plenty of outdoorsy things to do, but that’s more for adults or older kids.

When we went, we arrived in Vegas a day before our 14th wedding anniversary and did a bit of shopping and then a helicopter trip to the Grand Canyon and Cirque du Soleil on the anniversary, but we were keen to get out of town after that. It certainly wasn’t our thing.