9 weeks to go. Busy out on the course last weekend, saw a few jerseys from non-local Tri clubs coming over to scout the course.

I (Triing Swimmer) ended the tritalk 1.0 thread hoping to recce it around 27-28kph so I’ll eat my humble pie and admit to managing 26.2kph for 100km (inside a 150km Ride) in race conditions/effort.

Me & my Mrs doing IMUK and i’m debating bike choice/set-up. Hopefully we’ll both be towards the pointier end of the race and will be looking for a decent placing. I’m fairly strong on bike and confident riding technical stuff on TT. Mrs is a veritable goat going up hills (45kg, 4.7w/kg FTP), lot’s of riding experience but she’s still not the most confident descending/riding on sketchy roads.).

Road vs Tri? (Listened to the Foggy/Brick Session podcast already).

Gearing wise? Sounds like nothing too steep, but enough draggy bits/climby bits that you’d need some lowish gears and want to avoid grinding as sounds like it will be a long day, but having something big may gain some speed, if you’re confident enough. I’m thinking 53/38 & 28/11 for me and maybe 50/34 & 28/11 for the Mrs.

Rode it twice as 1 lap and 1.3 laps. Will have one more attempt next weekend either as 1.3 Laps plus there and back, or two laps and drive there, either will be 160km rides.

Still don’t fully understand differences but a quick count says my road bike has 50/34 on front and 28/11 on back. All I know is I have a low threshold for needing the smallest gear on it still. Although as I’m getting better I would need bigger gears next year if did flat course.

Guy called Sean who did the majority of the work, the guy in second wheel Graham managed 41 kph in his last sprint bike split…?!

Obviously traffic, junctions, closed roads, taper etc will make a difference.
I hit 36 kph ish for a 70.3 bike split on Sunday, for a similar effort I’m hitting 26 on the loop…
It’s slow!

Maybe they’ll get someone to move a turnaround cone like happened a few years ago, and make it several miles short

Don’t worry about speeds, this is an iconic event.

Really pleased to go sub 4:40 on a far from perfect day…

It’s a great race, run by a great club in a great City.

I hope IMUK goes half as well…
Bike bike and more bike for the next three weeks as my swim and run are we’re they need to be.

Really pleased to go sub 4:40 on a far from perfect day…

I saw the winner went sub4

Which amazed me!
A few old TTers raced there, who I tracked.
It’s my most local middle distance, too.

It might be one for next year now they’ve changed the course (I last did the Oly in 2008 and didn’t like the run around Grosvenor Park, or the rapid river swim!!!)

I did the Olympic in 2008…?!
The run is mostly in the meadows, a bit stop start, twisty turns and quite a bit of congestion.
It’s a similar course to the oly but you get the dual carriage way fast bit and a trip around the wxm industrial est.
which is unremarkable but not too taxing.
The wind got up on the second lap but overall went well.

Similar, I averaged 29.8kph for Epicman 90km with 1700m climbing and ran well off it, but looking at ~26kph at Bolton

You did a 2:12.
My second season and struggled to a 2:26.
I remember people walking up the bank of the Dee, as the current was so strong.

I’ve got it down as 2:11…?
Lost a min somewhere there!
Think I ran well but undercooked the bike…
Tony Cullen is from up here, great athlete but maybe it was just a fast day.
It certainly wasn’t still, wind wise.

You doing IMUK this time?

You doing IMUK this time?

No. I may nip up for a quick recce and support, depending on the date.
Going to see what the feedback is for this year first

Well half of one anyway …?

Sunday. I will be playing Dave Scott. Older, better facial hair and quite prepared to use tactics like this if the opportunity arises 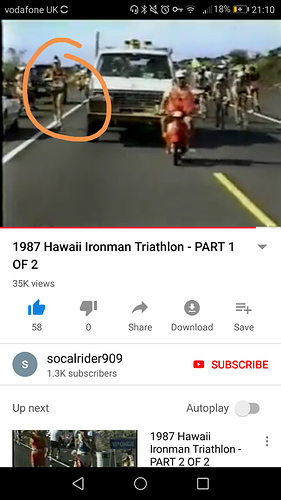 Yes. I’m local enough to Bolton now to recce the course, which gives a massive advantage.
But I’ve also never been to South Wales and Tenby looks amazing

Either event would be “for fun” with no time goal or anything daft like that!

The HalfIronWar is this weekend and I’m super excited with the thought of completing 113km of racing.
I mean, it’s quite abnormal, isn’t it!?!

He’s already thrown in his ten years older excuses.
I’ve got my 10kg heavier excuses.
To be fair, I’ve had a fair old while out and am just using this to gauge where I’m at after some focussed training.