Also thinking about this at the weekend, but if Zwift is allowed - what’s stopping me starting my ride by riding with somebody who just happens to be at the top of the Alpe when I start my ride?

Soooooo…as we predicted, its a feature lite training log, with a few league tables. Neat. Sure it’ll be a raging success for a few days until its riven with cheating.

I’ve been to have a look because I’ve already got athletes asking ‘if they can do the Ironman VR race this weekend.’

Despite my thinking still being that it’s not a good idea for anyone in the UK to be hammering themselves for 90km on the bike or 21.1km on the run - I can’t find the answer to how a 90km indoor ride counts towards this - SURELY they’re smart enough to work out the whole ‘start the ride at the top of AlpeDuZwift’ thing for cheating? Or ride the ‘old school’ trainer with hardly any resistance on it so you cover 90km in 90 mins? Aren’t they?

The whole thing feels like a total clusterfuck before it’s even started. It’s bad enough to be encouraging people to be racing while all this shit is going on, but then the results are going to be so ridden with ‘false results’ that EVERYONE who’s taken part with be pissed off with the end result.
And this is from a company worth £650 million? Jesus.

Or ride the ‘old school’ trainer with hardly any resistance on it so you cover 90km in 90 mins? Aren’t they?

Don’t even need to have the roller touching the rear wheel, zero resistance. (If using speed & cadence sensor)

I did 2 Zwift rides yesterday… Ironman VR says NO 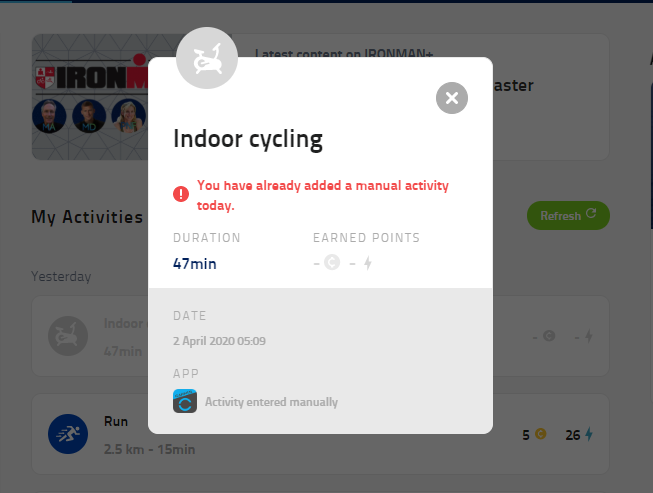 I think that if IM want to do this properly, they could look at how Zwftpower is setup. I am sure that ZP is not perfect, however, in my opinion they do a pretty good job at reducing cheating through a combination of statistcal analysis and crowd based policing

My Zwift ride went straight in as below from Strava 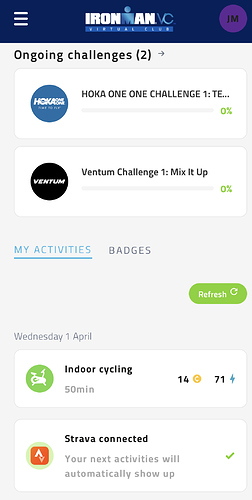 Conversely, my Haute Route ride from this morning counted towards the Ventum Challenge 1, and meant I could check if I’d won a prize (I hadnt).

I’m registered for the VR1, but I’m not going to bother. I’m getting pretty tired from a lot of zwift riding (this week was meant to be a recovery week - oops), and the Haute Route itself is going to be a big challenge.

Tell that to Thomas De Gendt

Tell that to Thomas De Gendt 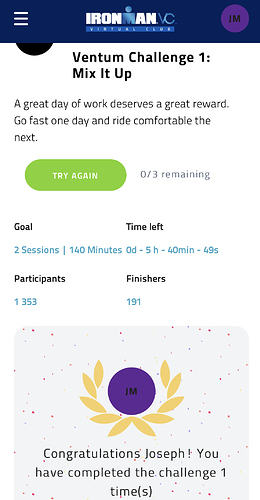 So my Zwift ride obviously was counting despite no progress showing, I did 90mins on TR today and the challenge shows as complete.

On that basis I’ll probably do outdoor Strava runs and a TR bike tomorrow, then a Strava run on Sunday.

I’m not sure I get this. I have trained to power so long, distance has almost lost meaning, in fact I was just explaining to a UK AG rtriathlete last month to ignore the distance numbers and focus on power.

Are we saying that Trainer numbers are less legit than Zwift numbers?

I’ve seen that it takes both TR and Zwift input, and I was going with TR tomorrow but I don’t want to be accused of cheating.

At the same time, if both are legit I suppose I don’t want to penalise myself with one that reports a lower distance…fuck me, I feel like I’m cheating already.

. What are the fucking rules!?

I’m not sure I get this. I have trained to power so long, distance has almost lost meaning,

Exactly this, I am not sure what is and what is not accepted on Ironman VR, however, if I added a speed sensor to my wheel, and sat on a dumb wheel on trainer, with no resistance set, I could just spin at 100rpm in top gear for 1h30m, at 50w and cover 90km all recorded by my Garmin Head unit and uploaded in Garmin connect

Things are a bit better in TR or Zwift, as there is a built in relationship between speed and power, however, I could start my Zwift ride at the top of the Alpe, and the first 12km would be at an average speed of 70kph

My point is that indoor training, distance is meaningless, Zwift might show that I covered 90km, but it is a purely calculated number and has no basis in reality

The whole site is a complete mess… if you go to the help pages, they are ‘United Heroes’ branded, and there is no way back to the IMVC pages… its hard to understand how it works, and the FAQs are utterly hopeless.

I am really struggling to see what the point of it is, beyond IM trying to create another logging platform, which they’ll need to do MUCH better than this if they are to unseat Strava, Garmin, TP etc. What exactly do I get from this site that I don’t already have?

On the flipside, I am REALLY looking forward to the chaos that will ensue when results start dropping in, and ‘Ernesto’ from Sau Paulo logs his first 5k in 11 mins 25 secs…

What’s the ST take on it?

Things are a bit better in TR

Not really. TR is all about power. They record speed/distance only because users moaned so much when they didnt … they’ve said on their podcast that they’d rather not as it’s meaningless.

In erg mode, I can spin at 100w in 36-28 and I’ll get a conceptual speed of about 12kph. If I change erg to 200w, it will still output conceptual speed of 12kph in the same gear, it’s just upped the erg resistance to create the additional power necessary into the cranks to generate the same “speed” into the rear hub. If I shift to 52-11, the erg functionality will still keep me at 200w but the implied speed will then be through the roof. As you’re in a bigger gear requiring more force, the resistance from the erg is way lower equalling more speed. Much the same as riding 200w uphill in 36-28 versus 200w downhill in 52-11

Zwift might show that I covered 90km, but it is a purely calculated number and has no basis in reality

I think I agree with you on the whole, but the purely calculated number is modelled on reality so it shouldn’t be fantasy numbers. Ideal numbers perhaps, but I think a fair amount of science went into their modelling.

I was using it earlier in the year to estimate my 40km time for the olympics I was going to do (actually don’t think London have cancelled yet). Which also reminds me I was going to compare my flat speed times from IMCH2019 to Zwift for similar power…

I was thinking about doing this and did sign up…

but it seems to much of a mess…

and I don’t particularly want to go for a time trial 5km run or a longer 21km run over the weekend where I live unfortunately. Maybe if I can get out the door early enough, but I like the flexibility of being able to go home if I feel it is too busy outside like I have been doing the past few days. I don’t think I should be mentally committing to a specific (fairly long) distance, nor trying to find the flattest fastest route.

I’m out. This could be done so much better

Pro Race on April 4th has Naeth, Carfrae, Seymour and McCauley in the womens. 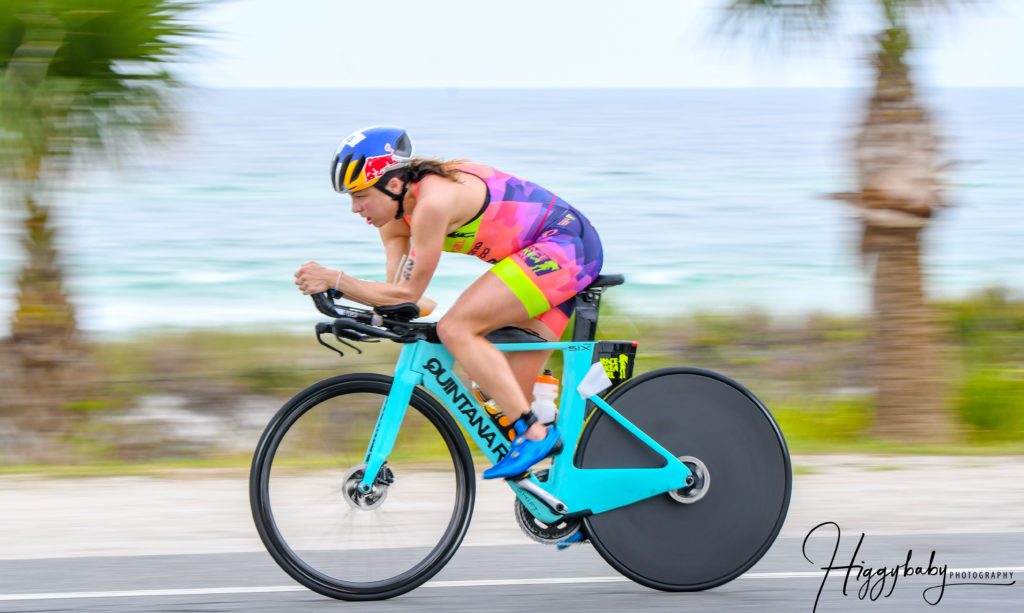 Only the bike is headed to head though, on Rouvy, televised on Facebook Live.