Took my New TT Bike Cervelo P3X, 80mm DT Swiss front and rear, for it first “balls out” ride. Course is 38km around a lake, with 250m total elevation, Usually I start a second lap to get a 40km time. It is a course I have ridden many times on my old TT bike, Specialized Shiv, Walker Brothers 88mm front rear disc

Headlines: my second fastest circuit, only time I went faster was during the Triathlon last year, where I didn’t have to worry about traffic and there were no red lights

40km completed in under 1 hour, despite being held up briefly by 3 set of lights, and slow traffic through one town

Compared with my previous PB set in June, I was 67s quicker, but power was 2W higher

Conclusion: The Shiv is still a very quick bike, however, initial impression is that the Cervelo is around 1 minute faster on a 40km circuit, and probably 4-5 mins quicker on an Ironman

Those are really expensive minutes, but what you do not see is the improvements I feel climbing and the extra confidence I have on the descents, partly due to disc brakes, but also due to geometry / frame stiffness

I think you do push yourself when you get a new bike to prove it is worth it, especially when it is an expensive upgrade. You don’t want to be seen to be going slow on such a steed.

Getting a new bike with disc brakes seems to be a must these days and it put me off considering a TT bike this year as there are so few of them with that option. Without disc brakes on some slopes near me in the wet, it was never really possible to stop without them and caused a few squeaky bum moments…

Good work 5 mins on an Ironman bike leg is not to be sniffed at if you are wanting to be in the mix for Kona. If you believe it is quicker then it is.

I am a few years behind the curve having just upgraded to a Shiv TT from a Transition.

There is definitely an element of NBS

I am certainly trying to justify the purchase, but at the end of the day it comes down to one too many wet triathlons, after each one I question my sanity riding full speed on TT bike with carbon rims.

Part of me was fearing that the Shiv would be faster, with a rear disc, and fast set of wheels, I am also fully dialed into riding the Shiv, so was slightly relieved that the P3X is at least as fast and probably a bit faster.

That’s one very sweet bike! I can but dream.

I also think somehow new bikes feel more ‘solid’ and responsive than old ones. Although various LBS’s have told me I am making it up I am sure they deteriorate in some way. e.g. my 2012 Cannondale six felt bomber when I bought it, super solid through corners, stable fast breaking, quick to accelerate etc. Now, well, it just doesn’t.

Not sure about bikes, but carbon windsurf boards definitely get flexy. I am good friends with UKs top windsurfer and we were discussing this, when he gets his new kit at the start of each season, it feels super fast and responsive, for many years he thought that it was improvements in technology, until he happened use a brand new board which was a model from 2 seasons earlier having damaged his current board, and he found that a new ‘old shape’ board was faster than his old ‘new shape’ board

Yeah, I might have to dip into the piggy bank if I have another serious race.

It’s not about the bike! 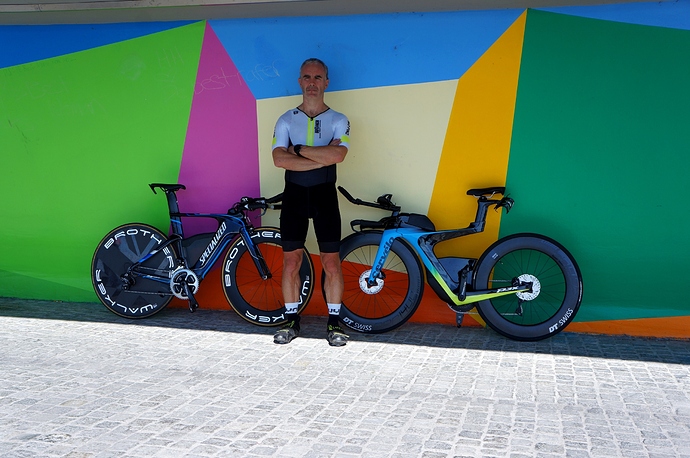 I’ve now had some time to get used to the P3X, I’ve done a couple of races as well as some longer training rides. Today I decided to take both bikes on a fast lap of my favourite TT circuit, a 38km loop of the Zugersee lake, it is pretty traffic free, on good road surface and has 360m elevation, but no major climbs, just rolling.

First up was the Shiv, in full TT spec, with deep front and disc rear. It was a shock to get back on the Shiv, it feels fast and edgy. I was surprised how aggressively I had it setup, with bars set very low. The first 12km of the loop is pretty flat, and I was flying along at 42kph… Its a popular route for cyclists, I’m not sure what some of the bigger “pelotons” thought as a flew past them. The rest of the loop is rolling hills, however, I was still maintaining a good pace, on some of the downhill sections I was able to get a good draft off Sunday drivers. Overall finished in 55m58s at an average speed of 39.2kph @ 238w AP and 248w NP.

Back home and quick bike switch onto Cervelo, same padals, so Power meter readings should be consistent. Immediately feels like a totally different bike, much more directionally stable, much lower amount of vibration, makes the bike feel effortless after riding the Shiv. Setup also feels different, the Cervelo is longer less cramped riding position, and bars are noticeably higher, and not so aggressive aero positon. First 12km stretch much slower at 40.5kph, on the first run, I had fresh legs, now my legs had 50km of pretty hard rinding in them. However, remainder of the loop I was marginally faster on the Cervelo. Finished in 56m20s at and average speed of 39.0kph @ 230w AP and 238w NP.

so what conclusions can I draw? The difference in speed is pretty marginal. I would say that the Shiv could be faster hammering down a dead straight dead flat piece of road, The P3X has an edge on the climbs, It feels stiffer, more like a normal bike. Even though there were no significant hills, On the Descents, the P3X has a big advantage, as you have the confidence to push without any hesitation.

Next dilema is rear disc or no… not an issue for Lanza, however, I know that the Shiv is significantly faster with a 80mm & Disc over a 66mm&82mm combination. The guys at Swiss side tell me it is only worth 5w @ 40kph… but I’m not convinced

After riding 2 hours fully in Aero position my shoulders and neck were pretty uncomfortable. I think that a bike fit may be in order

The Cervelo looks very nice Matt, Shiv not quite as sleek both pretty good bikes though and not much to choose between them.

Andreas Raelert is sponsored by Swiss Side, and yet he rides a (rebranded) disc…

I had to chuckle when I came across an ST thread about Heather Wurtle’s new bike and they referred to her old P5X as “The Dentist’s Chair”. They do have their moments

So, which of your bikes gives you the most pleasure to ride, is it the P3X or a road bike?