Hi everyone. The turbos in the photo attached are the ones you need to do Ironman virtual racing. I’ve half been thinking of starting on Zwift (doing plenty of training but no racing to show for it) but I only have a basic Kurt Kinetic non-smart turbo. I think having a smart turbo would make Zwift etc better and if I ever did want to do any virtual racing then I’d need an “approved” turbo (not sure I agree with the principle of having to have approved equipment etc, but if I’m going to look at getting a new turbo I may as well keep doors open! And hope Ironman don’t bring out their own turbo in 12 months which they would require you to use). I really like turbo training and would like to think I am more than just an occasional beginner… I don’t need all the bells and whistles (I’m still using a Garmin Edge 500 for example) but equally if the lowest-priced option below is going to be £500 and an extra £100-200 would get you a significantly better turbo and racing experience then I’d be willing to pay it. Would be very grateful for any recommendations! (One last question - does your power which zwift etc uses to work out what speed you’re going at come from the smart turbo or your own power meter?)
Thanks 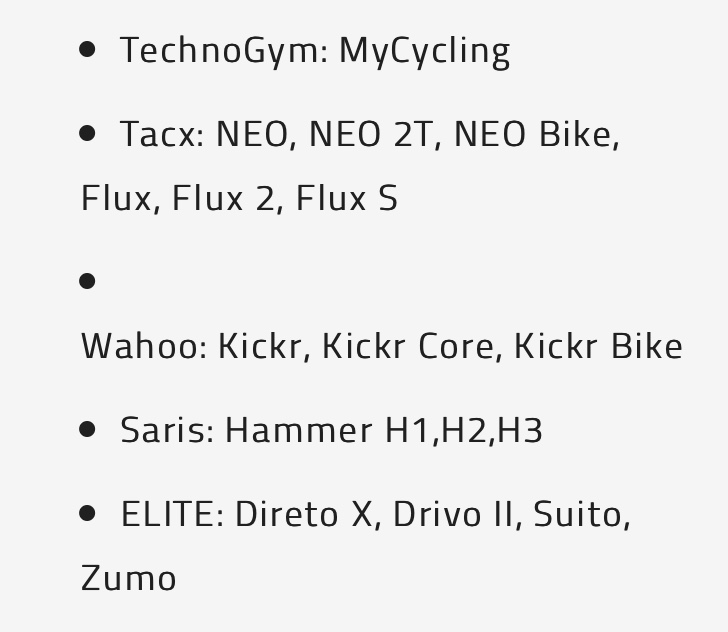 I bought one shortly before DC Rainmaker said ‘don’t buy this’ and it’s been OK, but i definitely couldn’t recommend it.

Ive got an Elite Zumo, functioning well now but took three months toing and froing with support to get it aligned to my power meter, so I cant recommend it.

I strongly recommend a tacx new 2T.
If you have:

I’ve had a flux 1 for a few years and it’s been pretty solid. There also seems to be a fair second hand market for fixing any belt or pulley issues.

The flux 2 has supposed to have had an upgrade but I think that would be a gamble.

I got a suito a month ago, had massive stability issues… Not least cause two major bolts were missing from the unit!!
Then got a saris h3.

Ride wise, on zwift can’t say i notice much difference between the h3 and the flux.
The saris is so quiet tho.

There seems to also be less Internet noise about the saris. Any any problems normally fixed with belt spray to stop the slipping.

Its not cheap, not its not as bad as a neo either.

My aging 1st gen Wahoo Kickr is still going strong and hasn’t had any issues.

One last question - does your power which zwift etc uses to work out what speed you’re going at come from the smart turbo or your own power meter?

On this, you can choose. I choose my power meter so my numbers are as consistent as they can be to other riding.

In terms of turbo, I have to say having borrowed a kickr, I can see the benefit in spending on the top ones. My previous one that broke was a mid range. If they’re willing to sell me this one I’d take that, but if not then I’ll probably use the refund from my Elite to buy one new.