Howdy peeps… I used to be very in touch with Garmin & options for bike computers & running watches and I’ve worked my way through a series of forerunners in the past.

My 910xt was never quite broken enough to need replacing and has done me very well, it’s now gone AWOL so might just be the excuse I need to replace it… and the options & prices seem to have skyrocketed !

Requirements are I think:

Any other features I didn’t know I needed ?

I’ve got a 735xt that I’m happy with and can be picked up for a decent price as it’s been out a few years now too. I paid £200 for the Tri pack with both chest straps and it does wrist HR too.
The main criticism of it is battery life as it won’t last a full IM for most people but your 12 hours should be OK.
It doesn’t have an altimeter but gets elevation from GPS - it’s less accurate but doesn’t go wrong as altimeters have been Garmin’s Achilles heal for years.

I have a TomTom which covers most of the things I do (although swim function is a bit iffy - much like my swimming) but I’m sure I read that they are now withdrawing from the sports watch market and no new models are coming.

Garmin is the safe bet, plenty of options and support. But some people seem to have problems.

My 920 looks huge compared to the 945. The 945 does seem to have decent battery life and I use it as a general watch these days. But GPS can be a bit suss for some people, I’ve had no issues on the bike and running but don’t live near big buildings etc.

Open water swimming can be a bit iffy though, it seems to lose position the minute it goes in the water but I have a feeling an update might have resolved that.

There’s the other Garmin thread with more opinions.

735 Battery life is not great. should be fine for 12 hours, but not too much longer. The 735 is missing some of the metrics available on the 935 and 945… although not sure that you would really miss them. Optical HR monitor (OHR) is 1st generation and not as accurate as later models. Now for sale a great price, so could be a bargain, 90% of a 945 at less than 50% of price

935 has almost everything that you need… however, if you want to listen to music you need to carry your phone or other device. In the WInter, this is not an issue for me as I have pockets, however, in the summer I don’t like carrying phone. Battery life is great, at least 18 hours. Price is coming down

945 is a better version of 935, OHR monitor can measure HR on swim, it can display 6 fields rather than 4 on 935 when exercising (which I would find a benefit), and I believe that the OHR is more accurate than 935.

When my 935 dies I will upgrade to 945. My 935 is almost 3 years old, and rarely misses a beat, although it has frozen twice, which was inconvenient, but didn’t lose any data.

Bigger heavier watch, less aero on bike and additional weight on wrist on swim, whether it makes a difference or not is questionable, however, from a psycological perspective I would go with 935/945

The stupidest thing of all is its advertised as the rugged out door watch. What do outdoorsy people often do, wear a back pack. The watch gets caught every chuffing day on my backpack strap

+1 for comments so far on Fenix.
I’ve also seen reports of the GPS being slightly inferior which some put down to the metal case. I had a Fenix 2 for a while and can’t say I noticed any difference in that respect but definitely the size, especially getting wetsuit on/off.

That’s interesting about the GPS. I hadnt heard that but I do get the odd stupid track. Like this.

I have never fancied a triathlon watch and prefer having a bike computer and run watch as separate devices. I have the Garmin FR 235 and it does the job and has done for quite a while now. If I was to replace it now it would be with the FR 645 music, I rarely run with music but mostly as I don’t carry a phone when I run and although my creative labs MP3 player still works, it’s not the noughties.

I have Fenix 5, been reliable. altitude went out so had to calibrate it…easy to do automatically with watch functions and GPS though although you can do it manually. battery is great, couple of weeks without charge unless i do mega hours, think its over 20hrs of use

I find the Fenix 5 quite chunky but I do have thin wrists.
I went from a 910 to the Fenix 5 and I don’t think the GPS is as good in the Fenix, I can get some odd tracks with it.
Had it for over 2 years now and if I do upgrade I would go for something slimmer like the 955 and stay away from the Fenix series.

Based on what you are after my recommendation would be the Garmin 945 or the Fenix 6. They are almost identical, the Fenix 6 is slightly bigger and heavier. The sapphire version of the Fenix is more scratch proof . My wife recently purchased the latter essentially to do UTMB races. The battery life on both watches is 36 hours in GPS mode which should be enough!! (The fenix 6 gives you more options to extend battery life beyond this if required). The DCrainmaker website is a great place to compare watches

I’m standing on a beach at “sea level” and it showing -149. Think it might need a calibration.

Yes that’s exactly how I noticed, googled it and found it’s a simple button press to fix. I thought the watch was screwed

ed_m you seem to be more of a runner, therefore I would go for a fenix. it is great. I have a 5 (not a plus) which can be found quite cheap now. It is a year old and it recently died at 12 1/2 hours from a full charge on a race with all the toys switched on. I think the plus/6 have more.

I defected form Garmin for a few years (to TomTom) and the GPS tracking is now where near as good as Garmin, I have a friend who has a fitbit and it is similar (I get that is more a lifestyle example).

It tracks all types of sports, but surely if you were into biking you would surely have a bike computer anyhow.

Remember these? Had to wear something the size of a fag packet on your shoulder to get GPS as well as the watch. 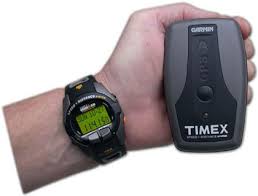