Self built or bought 🤔

Who has built their own bike from scratch? Was it the best decision you’ve ever made or wish you had bought ready made straight from shop? Let’s see your pics, looking for inspiration

I’ve built a couple of bikes up from frames I bought 2nd hand. A Litespeed Blade TT bike and a Dialled Bikes Kobe Ti MTB.
In both cases I used complete bikes as donors. The Blade, I already had a TT bike so just swapped all of the components over from that. The Kobe, I bought a cheap 2nd hand Halfords MTB that had a decent component spec and used that, it worked out much cheaper than buying components individually and could upgrade as and when.

I built my P3. I took it to the shop for BB and to have the crown race installed and fork cut. I could have done those bits but you needed special tools and I was nervous to cut the fork. The shop pissed me off by spending ages arguing that I couldn’t have an internal DI2 battery. Despite the fact I had already installed it.

I built the rest up. Took me an afternoon. 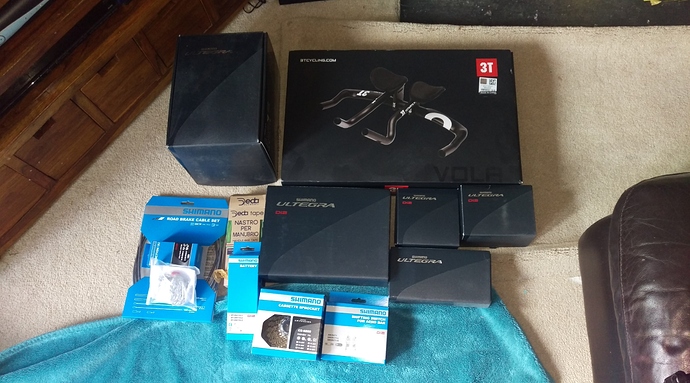 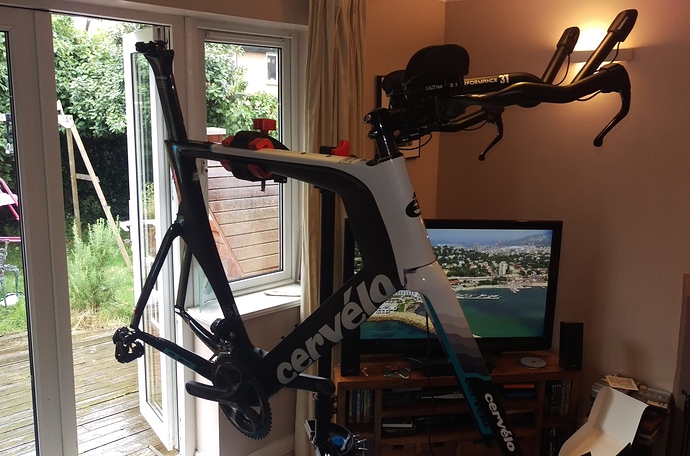 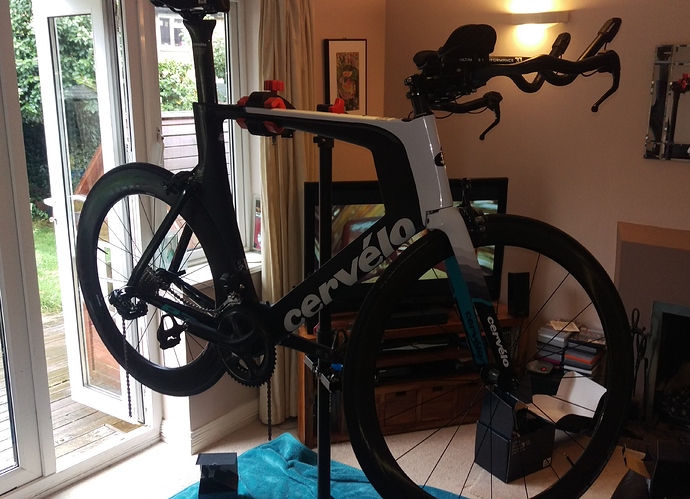 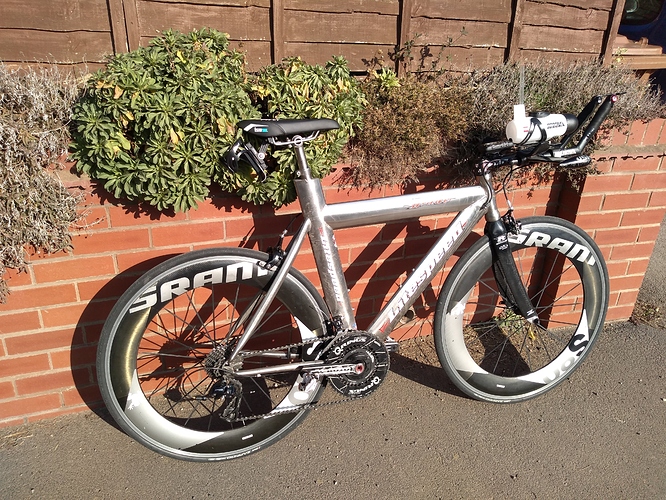 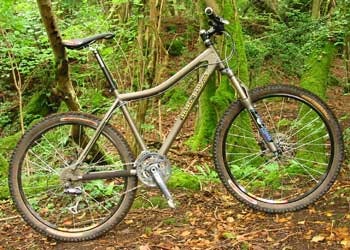 I’ve bought a new bike stripped & sold all the components & rebuilt with my own preferences.
The price the suppliers get the components for means that the total cost is usually much less than the sum of the parts.

One of my other hobbies, when not training / competing is building bikes

I love being able to choose all of my own components; a pre-built bike, will often come with a great groupset and fancy sounding carbon frame, however, many of the ancilliaries will be cheap in order to sell bike at a price point.

When I build a bike, I will often take months looking for the right components to come up at the right price. 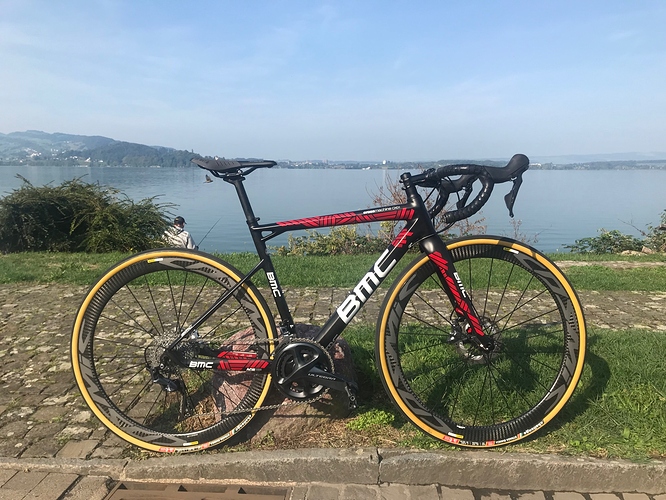 Just sold this one. Built with frame and Groupset sold at massive discount by Evans, when avoiding bankrupcy. Bars, Wheels, Saddle etc were from my collection of parts, mostly bought from bike shop bargain bins. Wheels came from Canyon as ex-demo 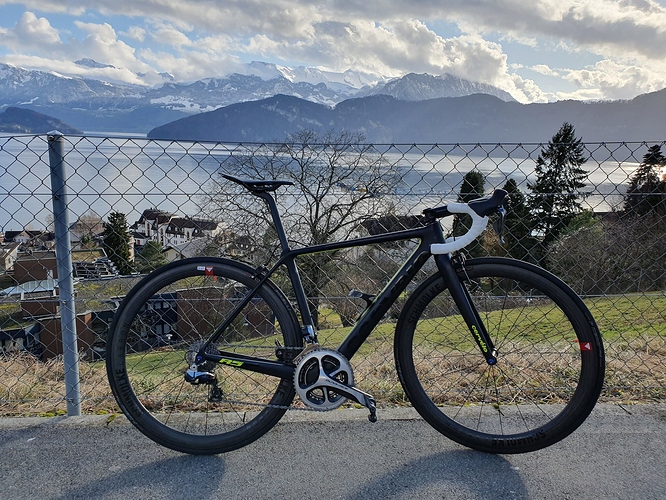 Latest build, weighs 5.5kg, parts took about 6 months to collect. Frame was ex Cervilo Bigla Team spare, groupset was sold by someone at work, who upgrades to SRAM AXS as he wanted the latest and greatest 12 speed, wheels stem, saddle and bars were a back Friday deal. Brakes were used, someone upgrading bike to discs.

My son is really into it too, so we have build many bikes that sold on for a good profit.

The shop pissed me off by spending ages arguing that I couldn’t have an internal DI2 battery. Despite the fact I had already installed it.

Ooo!.. where did you install it, and which battery?
(i’ve got a P3 and have Di2 in my future plans)

Pretty much always built bikes myself, mostly because I rarely trust the shop to do it right.

Also in the mountain bike world the bikes I have had have mostly come as frame only options.

I’ve enjoyed learning to build bikes, and racing on bikes I’ve built. Kind of makes up for not being able to ride them so well… 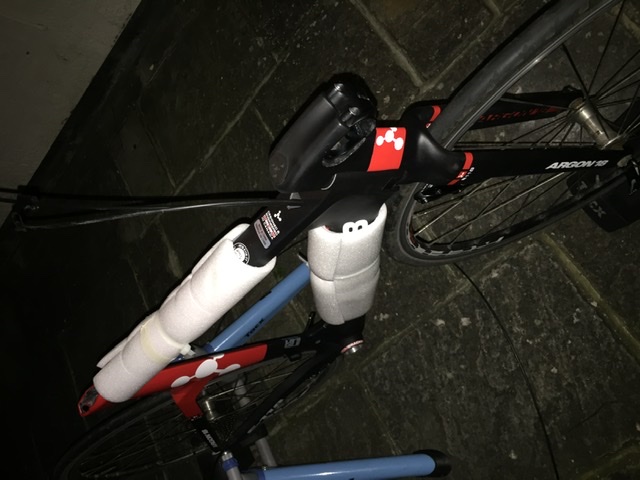 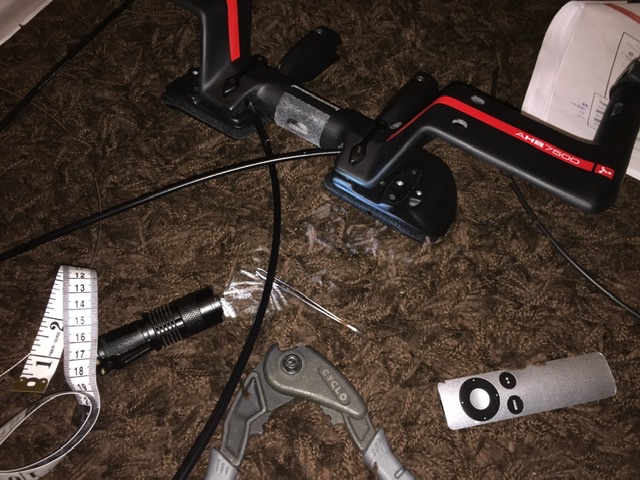 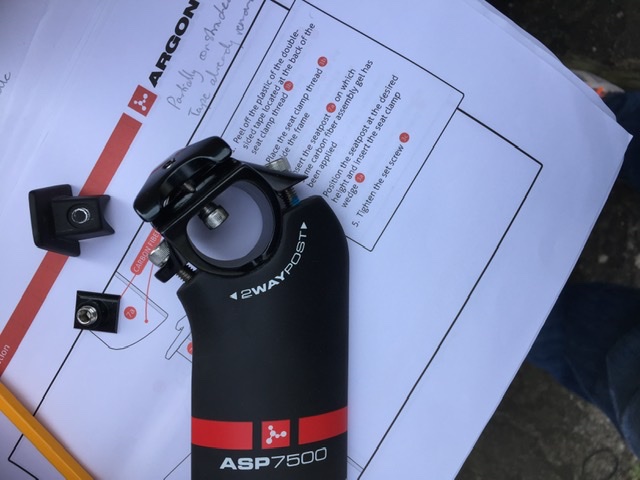 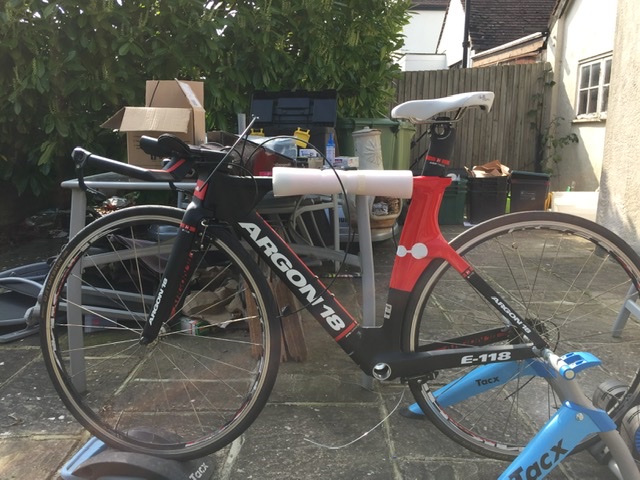 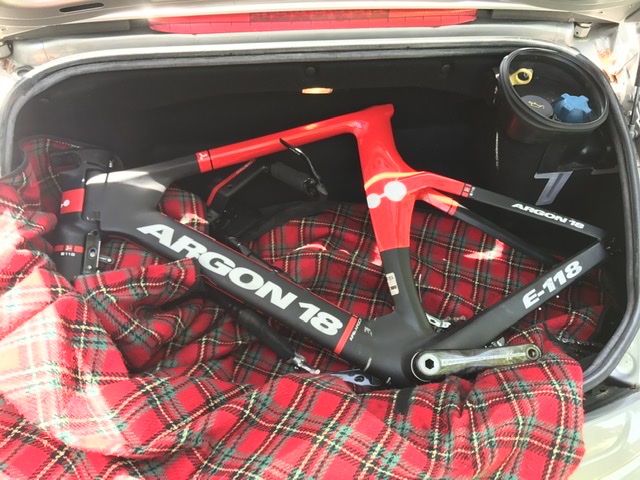 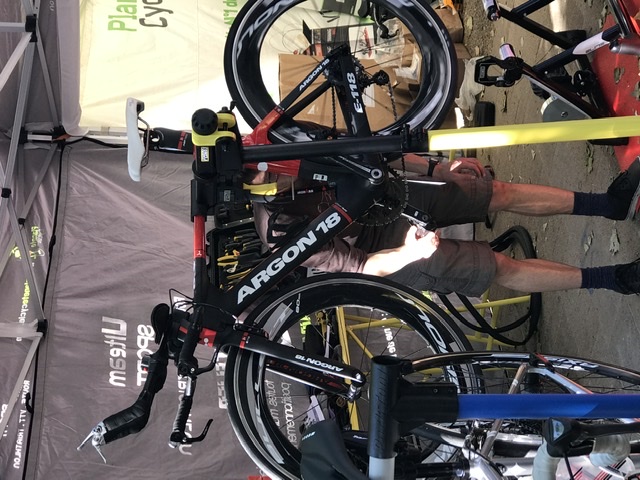 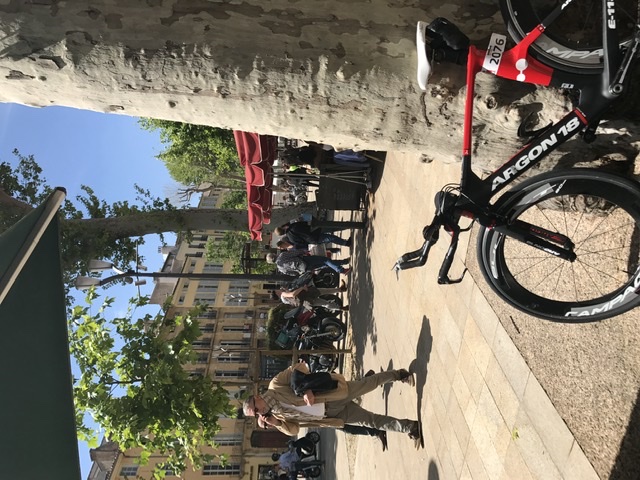 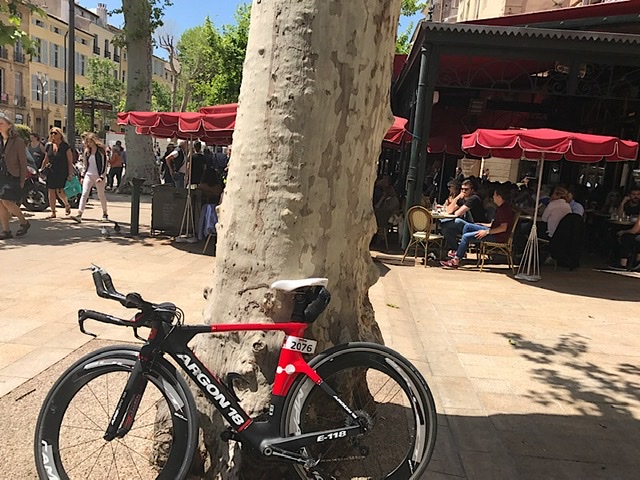 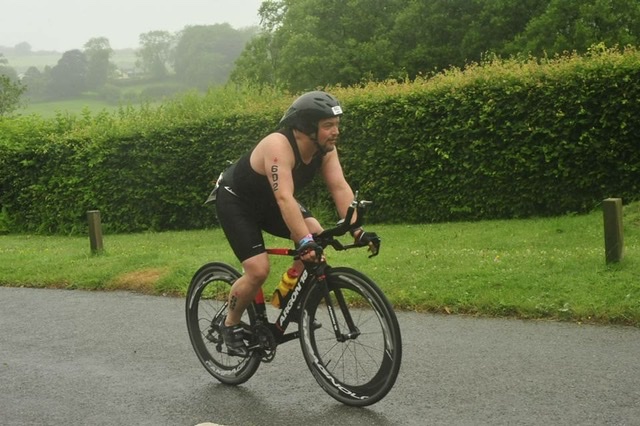 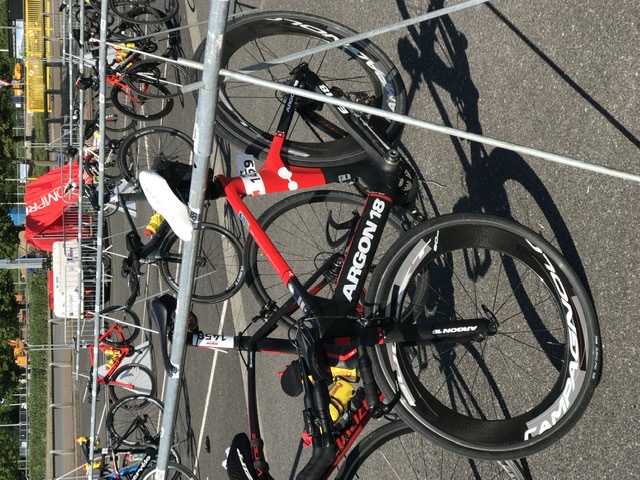 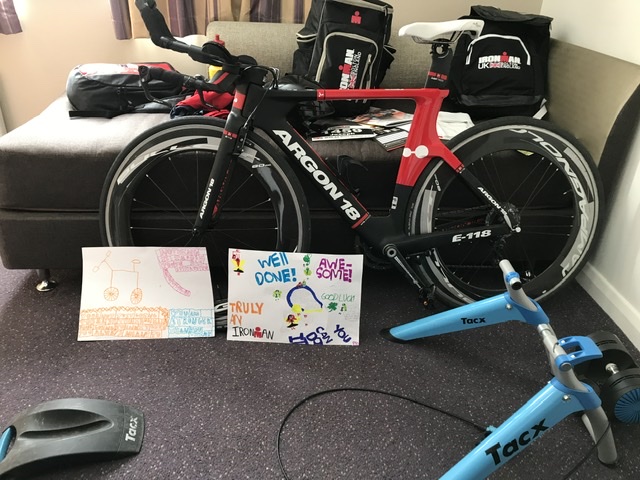 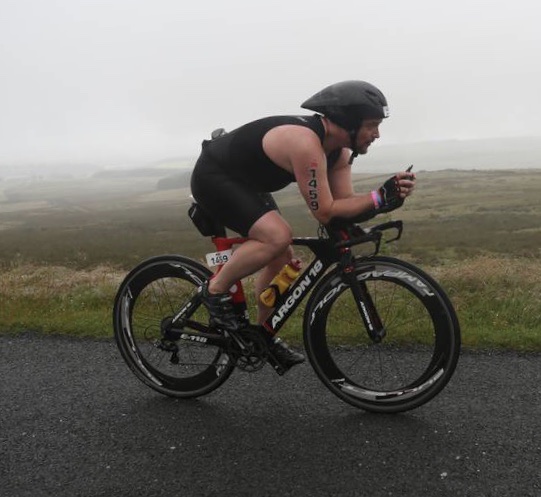 In over 30yrs of riding, I’ve only ever had 3 bikes that came assembled. My very first, my current mtb and the P3 (although the P3 was bought without wheels).

Not sure of the model number but it’s the internal one that is like a thick pencil. It slots into the seat post. Zip tie a zip tie round the top and wrap some masking tape round the top to hold it in place. The zip tie is so you can pull it out later if you need to.

Cervelo standard is (was mine is 2-3 years old) external battery on the down tube. Bike shop is a cervelo dealer and had a bit of the thems the rules attitude.

Zip tie a zip tie round the top and wrap some masking tape round the top to hold it in place. The zip tie is so you can pull it out later if you need to.

Good solution. I updated the battery on mine, and the previous owner had achieved the same effect but with a bit of string. Issue was the string had degraded. I only just managed to get the battery out! I can’t remember what I used instead when I put it back in, but if I ever take it out again I’ll use a zip tie.

One of the drawbacks of converting a non-native di2 frame into internal di2 shifting. With the friend I have who has the newer Plasma 5, the seatpost for that is designed for the battery to slot in and stay in place for easy extraction/removal.

One of my team mates had an issue with a loose battery connection on his Cervelo S5 after a flight. It took the mechanic ages to even find the battery and he eventually located it in the downtube. THe only way to access it was by taking out the bottom bracket

. It was obviously one of those set-ups that makes sense until something stops working and then it’s a nightmare to fix

I cant take all the credit as I think I found that on ST. RE: in the downtube, a yes that’s pressfit BB coming out if you need to get to it and plus it must rattle like hell in there. My junction box is there and I had read others complain about that rattling but I’ve not had issues.

Wrapped in bubble wrap. It doesn’t rattle at all (thankfully).

found that ST thread… someone has suggested that the Dogma F8 battery mount works in a P3… expensive test though at £60 if it desn’t work!

With your ‘masking tape’ approach, is there any risk of it dropping out into the seat tube when on cobbles for example?

Yep, mine did drop out. Just annoying retrieving it. Used more tape and pushed it in harder next time.

My last two TT bikes have been built up from framesets; it’s just finding a series of evenings to get it done. It looks like loads of others do the same.

I’ve always done a combination of both, but don’t like cutting carbon or messing around with headsets so usually get a shop to do them.

Although my last few bikes have been full builds but changed them later when components have worn out or the odd vanity project, cough, etap on the TT bike

, saved me a stack of time did that!