Anyone using it? I thought I remembered some post about it.

What are you going to do with all this information? The fact all this feedback is only available after the session renders it almost useless, you need feedback instantaneous but ignoring that, its information overload.

Then again how much are they charging?

so I’ll add my swimsmooth apple watch to my Garmin, HRV band, supersapiens, HR arm band, locker key, livestrong band and then a laptop at the end of the lane alongside an oversize bag of 10 types of paddle, 3 pullbuoys, 2 types of fins, snorkel, armbands, buoyancy shorts, £200 goggles and still flirt with Ironman cut offs

Just join a masters session or something. I know a good coach that is going to take over the masters at Walnuts

I’ve just had a read through this review and actually quite interested by what it appears to be showing.

I’ve only extremely rarely had decent feedback from swim coaches that I didn’t already know but having a method of being able to quantify my pull efficiency as it is now (or whatever) and then try changing technique sightly and look again in a few weeks would be very useful. If this allows a separation between technique and fitness then that would also make a big difference. With swimming being so technique based, it is actually sometimes easy for me to forget that with no change in technique, I do just get faster with fitness - to a point.

I don’t have an Apple watch (and not likely to be replacing my Garmin any time soon) but it does look like some interesting progress in swim tech.

£12.99/month though. If I was training for Arch to Arc again then maybe. For shaving a couple of minutes off IM time then maybe not. Interesting what it does though.

So it’s only got 30mins of data about half left and half right - here’s what it’s given so far: 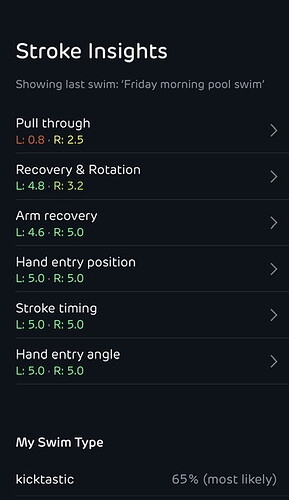 I’m not sure what to make of the pacing comment, there wasn’t any traffic to explain so I’m wondering if it’s a recording issue. I did start the session at home to see what controls were on the watch, then paused and drove to the pool so who knows if that affected it.

For the weak are, pull through, it has this:

And advises a doggy paddle drill to help correct it, a video is playable to take you through the drill.

What are you going to do with all this information?

Nothing wrong with cynicism! I’m sure someone is trying to put blood sugar level up on a HUD as we speak.

It’s a good question - I won’t be doing anything yet. Long and the short I guess is that you get a view of some flaws and some drills to work on, and the app gives you visibility of your progress in making changes.

You get three free sessions in the trial, so I’ll record another workout then pick a recommended drill, work on the for a week then record the final session to see if the changes have occured.

If you can use the information to improve and at £12 a month then it’s not a bad investment. I’m assuming you get access to the “guru” for thst which is a pretty good resource, well puts everything in one place. My tri club paid for all coaches to have access and whilst I rarely used it there was value for uncoached triathletes.

So I didn’t get to my second planned session until this morning. So this record should reflect changes I have tried to make…without any drills, just trying to bend the arm more.

Difference form the first session - no backstroke or breaststroke, just FS 100s. And 20 of them. Half with the watch on the left and half on the right. 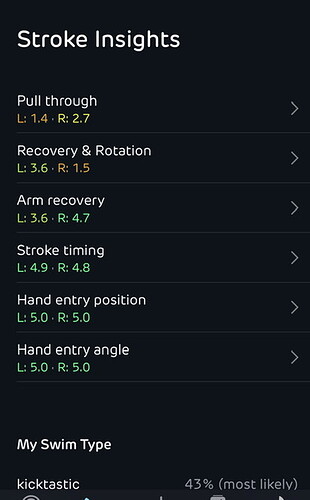 Although it feels really different, it’s just the left arm improved a point - and I don’t know if that’s good progress in a couple of weeks or not. According to insights I should have gained 1s per hundred, and will get another 5 if I keep improving.

Unfortunately my recovery and rotation has declined, costing me 1s per 100

Who knows if they’re related or coincidental.

Back in 2010/2011, Swimsmooth and Paul Newsome pretty much taught me to swim through their dvd, training plan and online/ email support. I was very impressed at the time at how responsive Paul Newsome was to emails. The other guy who helped a lot was @hammerer.

I know Hammerer is slightly sceptical about the app, but I have to confess, I love the look of it… enough so that its almost got me tempted to fork out for an Apple watch!

I am unable to comprehend how anyone gets through life without an Apple watch. If i hadn’t read this post i wouldn’t believe it was even possible in 2021.

Im only sceptical as I cant see how it knows what you are doing. Its having a good guess, and its reasonable price considering that the “guru” is part of it, If it helps then excellent, but I’m not convinced it is entirely scientific unless they have been developing for years. Think how the Stryd works and how long that took for instance.

Ive always wondered though it there was a way to put some form of strain gauges into a paddle to measure force and with some accelerometers work out the power you put through the stroke. Not convinced by a watch though, especially an Apple device

enough so that its almost got me tempted to fork out for an Apple watch!

It does look good, I was going to wait until my third swim and the trial expired before reviewing - but I’ve had a duplicate record pop up and my trial has expired after only two sessions. It has locked out access to the Insights on my previous swims on the app, although they seem to be available on the website still.

It’s challenging to form a confident opinion on something after two uses but these are my key points so far; 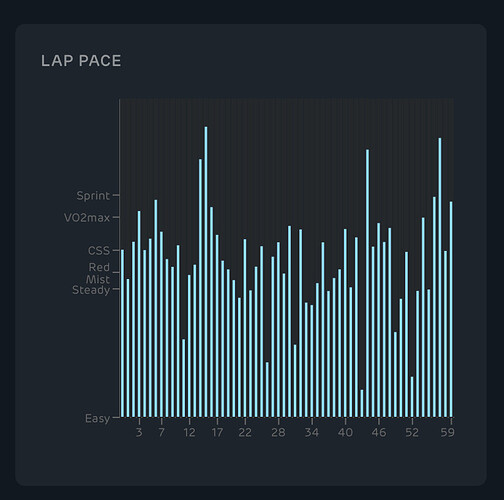 I looked at one for triathletes but it was very complex, it seemed like every 100m I had to do something different, which just doesn’t work for me - I’m busy and have little time to fuck about trying to go two seconds quicker or slower on my next length , vary rest times or whatever. Every session required three of four toys; fins, pull buoy, kick board and snorkel - two of which are prohibited in my pool.

Exciting, but lacking in the basics.

I think this is the way the tech is going, frankly I wish this had come out five years ago when I got the AW because by now it would be super. Stroke dynamics has to be the main hook, but I’m already suspecting that our strokes just don’t change very quickly, so this feature may become less significant in weekly training fairly quickly. Assuming that it is correct of course - I have no access to video facilities to check.

I’m not sure this is for triathletes. Triathletes want to send their data all over the place, maybe swimmers don’t care, but not being able to get this out of SwimSmooth and into TrainingPeaks, Garmin Connect, blah blah says they aren’t looking at triathletes to me. Most triathletes don’t swim enough, having very complex swim plans that must be printed out speaks to a very time-rich triathlete that I’ve never met. Their SwimSmooth book plans are much simpler, wu-main set-cool down usually simple enough even for me to remember…there is no way I’d remember anything form their plans.

Recommendation
I think until they resolve the above points, wear two watches and pay the £120/year. Garmin can do all the basic data and usual triathlete tracking/sharing stuff. Apple Watch/SwimSmooth can do the stroke analytics.

Ive always wondered though it there was a way to put some form of strain gauges into a paddle to measure force and with some accelerometers work out the power you put through the stroke.

That exists https://smartpaddle.trainesense.com/
Just ridiculously expensive and clearly geared towards swim squad coaches to use across their athletes, rather than for a single individual

Swimmers want a pace clock, nothing else! It won’t work for them. My coach mentor got his swim top squad to wear HRM in water, the sort that record and uploaded the data every session. He said whilst he got some good info from it, the squad didn’t stop whining about the straps.

Makes sense, I guess triathletes have no problem wearing a watch all the time. For coaches I’d suggest this as complementary information, a bit like video analysis. Video analysis doesn’t replace a coach, but periodically it can inform and improve learning.

I can see myself subscribing at some point, but I’d still need someone to eyeball me because a wearable is giving you the symptoms and inferring the cause. A coach is more able to see the cause.

Just ridiculously expensive and clearly geared towards swim squad coaches to use across their athletes,

The paddle looks like it gives a hell of a lot of info and not just power. You would need an experienced eye to interpret the data and what needs adjusting.

And people say it’s expensive, but no more so than a power meter on a bike.

(disclosureI have a pace clock on the wall, a PB and paddles. that’s it. So am not one for gadgets in the pool)

And people say it’s expensive, but no more so than a power meter on a bike.

It’s a fair point, but you don’t pay €20pm to record your data with a cycling power meter. That’s another €240 per year, every year.

And on top of that, they’ve jacked up the pricing of the unit substantially. If you look at any reviews from 2020, it was €499 for the device whereas now its €799. Compared to my first power2max at about €500-600, which I’ve only ever had to put a few coin batteries in, that’s a massive amount more expensive in my book!