I’ve tried merely focussing on running for a few years and seen some good improvements but not exactly leaps and bounds and my continued disappointing run performance at 140.6, 70.3 and marathon has lead me to decide to switch to pure running for next year or until I can run in a similar vein to my swim and bike.

At sprint, olympic and full distance this year it;s improved but it’s still such a relative weakness. London Triathlon provided this helpful graphic for me:

And just so this post isn’t completely negative, I think if I can improve my run I’m good enough in the other disciplines to get on the podium at least in local short course events.

So I’ve got lots of preconceived ideas about switching to just running but I’ve never truly done it. I’ve always had at a minimum some cross training on bike and swim. Whilst I am worried about losing my swim and bike gains, they are all for nothing if I cannot also perform on the run.

Have you switch from IM to just running and what did you do?

Question @joex and this is not meant to be flippant nor do I know the answer.

Are you over biking and adversely affecting your run?

Would a prolonged period dedicated to the run weaken your bike resulting in you starting the run in a worse state and unable to reach your potential?

Second of those would be more my concern but sure you would be maintains some bike base while upping your running.

Pretty much whereI’ve been for over a year now but obviously focussed on going long. I’d say I performed at Goodwood Marathon but the rest has been hit and miss.
Only running is very hard on the body and mind. You constantly have to think of ways to mix it up.

Are you over biking and adversely affecting your run?

Nah, I’m just not a good runner. My stand-alone times are still way off at long distance.

The chances of more injuries are high I would guess.

Virtually all my injuries in the last 10? Years have done from running or falling off my bike !

The low hr stuff is frustrating at first but can really work if you give it time and effort.

You did great at Barca but a similar bike and run time is unusual.

30 mins extra on you marathon during IM is good going.

Yeah, that’s the funny bit! Terrible relative to bike and swim and yet good relative to stand-alone at the same time.

But to bring it relative to other athletes, I think I should/could be doing a 4h30 IM run for example. At the local Sprint distance I was close to matching swim and bike of the winner but a 27m run to their 23m off the bike. 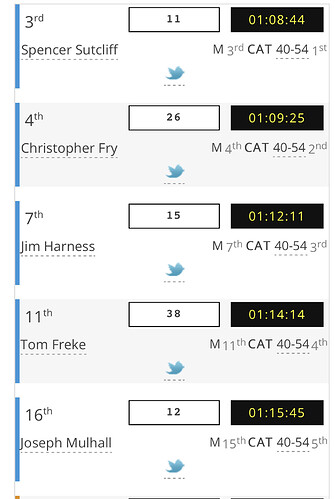 At Olympic this expands, I squeezed out a 49m 10k, locally they do a 42m nationally they’re breezing past at 30-something.

Biking I think I’ve seen my peak, or at least five years of strictured training has received the most focus and ~270W FTP is “good enough”. Now I do feel @hammerer have me a taste of faster swimming and that there is more there to gain but surely - and maybe I’m wrong here - surely the “low hanging fruit” is running?

I would say don’t completely abandon the other sports, I’ve always found that cross training works well. Even if you alternate a swim one week and a bike (Zwift) the other.

My goals for 2022 are pretty run focused, with a bit of bike TT. I plan to swim once a week. I’ll do weekly TTs later in the season and some Zwifting. But main focus will be running.

I have an athlete at the moment and I have put them on a running focus. 2 swims two turbos and 5 runs a week. Now there are lots of ways to do this though. Running is a skill though so look at drills in sessions also, but consistency is key. I do like a little and often approach, so even 15minutes is good. think about a 5 or 6 day approach, long run of an hr, a 30 minute run and then 3 short 15minutes runs, even 10mins off a turbo. Just focus on relaxing, quick cadence, being as light on the feet as possible.

I’m no sort of coach. But intuitively, wouldn’t you be better to keep all 3 going & like hammerer says “weight” the sport you want to improve? Maybe 10:30:60 swim/ bike/ run or something?

I’m mainly focussing on running right now, but still reckon spinning those legs on Zwift is beneficial when they are trashed from a long or hard run the night before.

intuitively, wouldn’t you be better to keep all 3 going & like hammerer says “weight” the sport you want to improve?

On the other hand, if I’m handling 10-16hrs weekly training without problems I can see that dropping to just the 4-5hrs running I can handle may not be entirely beneficial.

So if there is a balance that won’t inhibit running gains I’m happy to be convinced, but I am a bit skeptical.

I feel like I’m a better road runner when I’m doing some cycling for sure but the demands of ultra/work/family means that it’s the one that gets dropped. (swimming is a distant memory these days).

( I’m sure you know what your doing )

have an athlete at the moment and I have put them on a running focus.

How are they finding the switch?

I tried the 6d/week with 321 running or barryp as it’s known on ST at the beginning of this year. 2019 I tried 3d/week with RLRF. And from spring this year I tried MacMillan running 5d/week with Olympic bike/run, then 4/week switching to long course.

I think they all worked a bit and I didn’t get injured with any of the protocols despite the fears surrounding running intensity.

I’m vaguely thinking that now my season is done I’ll be doing strength for Q4 with maybe one SB&R per week to keep the cobwebs away. The Q1 I’ll be doing shorter, intense running 3/wk, then for Q2/Q3 the higher volume 5-6/week.

In terms of racing I want a season of half marathons - I feel if I get faster and really confident there I will have a decent chance of a “normal” 70.3 run split. And racing that distance should minimise recovery times and all the faff and nonsense of marathons and marathon training.

Also, 10hrs a week of running is pretty hard on the body. (ask me how I know

) and that’s a drop in the ocean compared to what proper runners are doing.

yes mate, but 2 are 10mins off a bike and another is just 15minutes, all very easy to add consistency and miles over the week. The 30minutes session has strides and drills in and then a longer 1hr run (shes just off a half so been running up to 2hrs over the summer) Its a bit like my theory on swimming frequency and consistency over hero workouts, especially off season. Shorter are easier to recover from, adds similar miles, as you are less fatigued you can focus on form rather than slugging it out and the average pace is typically higher as your are more able to focus and not fatigue as the time drags on.

The exact opposite to me

How are they finding the switch?

only back this week so hard to tell, its day 4, missed tuesday due to work but other than that its ok so far, nothing negative to report. Actually likes getting up and out for a little while in the morning. Has bulked the shorter ones with a walk to woods for example, easy run and walk home. I did it a while back myself, after school “run” every week day, only 30mintues then walk home with el nino. within a couple of weeks felt normal but as with everything I get lazy

Just my 2p…
Ive tried solely running. And I ended up burnt out and ran poor marathons twice. And then when I tried to revert back to tri, my bike and swim sucked and took a very long time to recover.

After my last failed marathon, I said I’d never “just run” again. I said to my coach that whether or not I entered a marathon again as a sole focus, I wanted cross training in place of the filler runs you’d normally have when just running.

When I did then enter another marathon I massively pb’d, by over 15mins (that was c9% off my previous pb).

A “run focus” can work wonders, but as others have said, I’d not drop swim-bike completely simply from an injury prevention perspective if you don’t have the history of running all the time, let alone if the goal of the run focus is ultimately to go back to tri and improve in that sport

I’ve also been a runner that does a little bit of multi sport. Which is code for I enjoy running and can do triathlons on fitness alone and a lifetime of plying water polo.

When I hammer the running, I end up injured and my general athleticism suffers. Now, I’ve tried to run 3-4 times and a week and supplement with swimming, spin classes and general gym work. Genuinely, I’ve not lost any speed.