Tell me about hydration vests

I use a Salomon vest when I do semi-self supported long runs 20+ milers, they’ve got 2x 500ml soft bottles which unlike the bike bottles don’t slosh around which is quieter and generally less annoying. Used it in 25C and above this year with no overheating. No chafing either. Comes in around £50 iirc. Also has small pockets to put gels or solid food in if needed.

I also use a Salomon Sense Lab 5, Use for anything over 2hrs, sometimes because I need it and sometimes just to have it to be used to it. This time of year it’s more for carrying stuff if the weather turns really, like a jacket or arm warmers and it’s handy for a phone in a zip lock bag.

You won’t want to be carrying much more than 1l on a marathon unless you really have to. That’s just extra weight. Instead a bottle stash/replenishment strategy would deffo work best. Are you planning on running loops (sorry just read FP said similar)?

That said, if your loop was, say an hour and you needed fluid with you on that hour, then I’d personally go for a vest. I hate running with a bottle in my hand, so I’d like the comfort of 2 x 500ml soft flasks on the front, with a few bits and bobs of fuel in the pack. Then I’d top them up every lap. That way you’re managing the overall weight you have to carry, but also carrying what you do have in the most effective way.

As with everything, give it a go first if you can to highlight potential discomfort early doors. Pre emptive bit of vas on the shoulders won’t do you any harm. Also helpful if the weather is playing silly buggers as you can carry a raincoat or whatever in case you end up having a little bonk at the furthest point from home. Always helpful when you’re self supported like you are.

Most big brands (and little ones) do a vest these days. Salomon, Osprey, Nathan, Ultimate Direction, Raid light and people on here have talked about the Decathlon one as well.

Personally I have the Osprey Duro 6 and it’s one of the best things I’ve ever bought. Super light, comfy and cheaper than the Salomon. Not sure where @symes is buying his from, cos they’re normally £120 or so. I need some buying assistance in the future (and apparently I work in procurement!

The cheap as chips vest from Amazon that always seems to come up is the Aoinjie (sp), I think it’s £25 or something and people like it.

Another good VFM brand getting attention now is Harrier.

Yes, keeps things simple too which is my preferred approach.

Ultimate Direction one for long runs. Phone, 2x500m soft flasks, loads of pockets on the front for food & gels.
Decent pack on the back which I rarely use but it fits loads in. Even clips for poles.

I used to to 4 x 5 mile loops and have gels & drinks in my front garden for my last few IM sessions.

That said, if your loop was, say an hour and you needed fluid with you on that hour, then I’d personally go for a vest. I hate running with a bottle in my hand

Yes, just over an hour hopefully. Much slower and Id be walking so not evapourating so much water.

I need some buying assistance in the future (and apparently I work in procurement!

…up to £55 now, my humblest apologies

Oh, you don’t say it was the cheap one

I was thinking of this, that I have used a couple of times 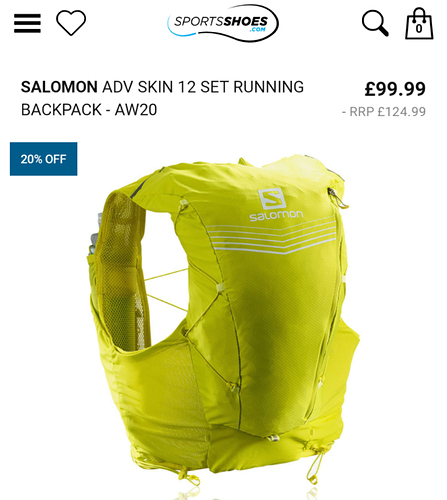 Have a look at the recommendations on here. I ended up with a Decathlon one which was cheap and does the job. I know some who use Aonjie one and like it. Not sure you need to spend much for training runs.

I’m looking for a running vest to carry water on long runs. I am fine up to 14 miles with nothing but worry that for the multiple 20 milers I’m planning I’ll either have to run loops or carry. Anyone got experience with these ones (currently on sale?) Or have recommendations for a similarly cheap something. https://www.sportsshoes.com/product/ulp182/ultimate-performance-grafham-2-litre-hydration-backpack/ https://www.sportsshoes.com/product/ino965/inov8-race-elite-vest-(without-bottles)/ P…

I’d say @gingerbongo would certainly be the go to guy here… but for my tuppence worth …, I have a very lightweight innov8 which I can use with a bladder or the 250ml soft bottles.
I really like it but I really notice the effect on Hot and sunny summer Days of the increased sweating/ decreased ventilation on my back… almost to the point that I questioned whether it was counter productive to wear it as it necessitated increased hydration !
A scientific study would no doubt disprove this, I’m just a sweaty bugger I guess.

Ive got the simpler version of that (doesn’t hold a bottle). its good but make you size right as they come up small.

Slightly off-topic, but I’d say the ability to explore further away and not need to run same routes around home all the time has to be a huge plus for them. I tend to just get by with a 250ml soft flask and ration it like a Saharan camel unless it’s really hot, but if I needed more I’d look at them for the route freedom rather than loops.

To be fair, I was VERY picky, as the pack is used for my long ultras. Even then, any pack gets uncomfortable after 24+ hrs on the shoulders.

I don’t tend to use it unless I’m going real remote or over 2hrs. Unless it’s proper hot, I don’t take any fluid for a run under 2hrs.

But @joex is on his IM mara. So much more to think about than a standalone, especially being self supported.

I think I’ll take @FatPom s advice and leave it out for IMVR. I just thought @hammerer would like to know.

I’d say the ability to explore further away and not need to run same routes around home all the time has to be a huge plus for them.

Yes, I ran around London and had to wear an Ironman bag which chafed my neck no matter how tight I pulled it. So maybe not for the IM mara, but in the long run…pun intended.

Nothing good usually follows that sentence…