The trials of building a Frankenbike (renamed)

Argh, my Frankenbike project has hit a compatibility issue.

I wanted to just keep the triple XT chainset, so got some 105 triple levers. But of course, the XT FD doesn’t work with STI levers (different cable pull ratio). So last night I ordered a Tiagra road triple RD…but of course that will be bottom-pull, and my MTB frame is set-up for top-pull front mechs

There must be top-pull FDs available for road levers - what did Cross bikes use for example?

I think there might be some kind of converter available with a pulley you attach to the frame and pass the cable around.

^^ Yes, some more Googefu has suggested this is my best bet

Sure that must be available as a triple?

…as I found out last night! Although I should have known, but it was worth a try.

One other thought. I’ve got new Tiagra on my road bike and the cable pull is different to all the other Shimano 10sp systems.
I’m guessing that only affects the rear mech but thought I’d mention it in case you can’t get the front to index properly.

It’s all a bit of a palaver at the front shifting end. I bought triple 105 shifters so I could keep the XT triple chainset, but of course MTB Front Mechs & chainsets have different geometry/clearances to road front mechs/chainsets. So I’ve probably tied myself in knots a bit here, by trying to keep as much of the original components as possible.

Perhaps ultimately, I should have just gone road double, and changed the chainset to a road double (CX rings). But of course now I’ve got triple left shifter so would be looking for a road triple

Argh this is all really vexing. Road triple mech doesn’t have the ‘range’ to shift to the big ring on an MTB; due to spacing of MTB chainsets; I know this and the pulley adapter hasn’t even arrived yet. I think I need to stop rushing to finish this and take a breath, so I don’t end-up spending (wasting) money on components that simply won’t work together.

One option is to go back to the XT front mech and either make do with one redundant chainring for a while, or use an old Dura Ace friction bar-end shifter with it, and see if that works (probably won’t have the cable pull ‘range’).

Obviously there are frame clearance issues when using road chainsets on MTB frames (my frame has a 63mm BB shell). I might be able to use a compact/CX double up front. Or maybe even (shudder) go 1x10; which would eliminate the FD issues!

The other issue is that indexing is a bit sketchy between 10 speed levers & 11 speed mech (pull ratios again!); so I probably need to get a 10 speed long cage mech, or try a dropout extender link with an old 10 speed short cage mech (anyone tried a Road Link?)

You may have already seen this but seems to have a bit of useful info about mixing MTB & Road components. 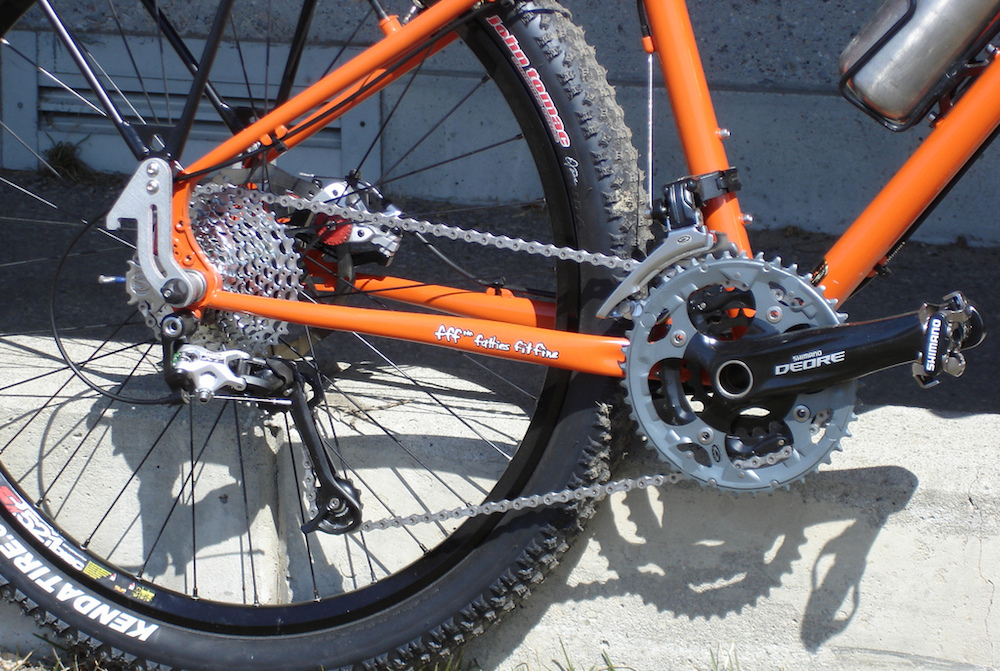 Sometimes a compact crankset isn't enough in the mountains. This resource will allow you to hack your drivetrain to get a better gear range!

Thanks for that. A lot to digest!

As much as I don’t like the SRAM Double Tap shifters, at least all their kit works off the same pull ratio! (1:1)

I’m going to try the original XT 9 speed Rear mech I removed from the bike; apparently pre 10 speed MTB stuff will work with road 10 shifters. It’s just a case of whether the road 10 speed cassette will mesh with the XT mech indexing

First, I need to try and drill out the snapped barrel adjuster!

First, I need to try and drill out the snapped barrel adjuster!

If you’ve got a set of Torx bits, hammering one slightly bigger than the hole in the barrel into it works quite well. Good for rounded allen caps too.

Yes, I did this successfully to a brake mounting bolt on my Speed Concept - I was somewhat nervous hammering something attached to a carbon frame!

Right, so I now see that there’s an adapter called the JTek Shiftmate 7, which alters cable pull so I can use STIs with MTB front mech. Wish I had seen this earlier

I will be sending the pulley adapter for the road mech back now, without opening it…when it arrives!

Success removing the sheared barrel screw. Although I had to use a very small drill bit first, to push out that retainer on the other side that I couldn’t remove with pliers; then used the hammer/torx method on what remained of the screw 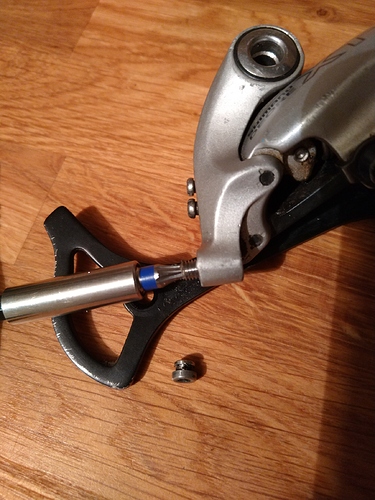 I’ve got an old (1980’s) MTB that I converted to a commuter…did also thinking about putting drops on it, and converting to STI shifters, but decided it wasn’t quite the right frame , so stuck with MTB setup… It has Deore XT thumb shifter, which are now rated as ‘vintage’… one of them failed when I was renovating/recovering with new cables, putting on a pannier rack etc… so googled replacements… holy shit!!! £80 for a single thumb shifter!!!.. was going to bin the bike, but the groupset is probably worth three hundred quid!

Reminded me when I read your progress, because the crank was well and truly stuck in place, and took ‘surgery’ to remove