Time for a realistic de-clutter

I’m in the process of turning the garage into the man cave/fettling space that I’ve been after. Trying to imagine where everything goes. I currently have three bikes at this house. (plus one at Mum’s). A road, a TT and a mtb.

I plan on doing a lot more XC type riding and racing and have thinking about the other two bikes. I didn’t do a single TT this year and given the versatility of a road bike, future plans and an honest view on the likelihood of doing an IM again, I keep questioning what I need the TT bike for?

The other question revolves around changing bikes/aero wheels and the consideration of disc brakes. All in all though, I reckon I could cover 90% of my needs with a roadie and the XC.

I’ve just gone through a similar thing except I had decent track, TT and a steel track/commute fixie. I hadnt ridden at Lee Valley in 2 years as the times arent suitable anymore and it’s £22 for about an hour riding. I didn’t enjoy riding TT so got rid of both and bought decent Aero roadie with di2 and discs. Don’t regret it so far although I do miss the velodrome, especially watching my son ride but until LV have more options I am never gonna ride there.

Because TT bikes are cool, and as unlikely as it may be to happen, you still dream of racing an Ironman.

Because TT bikes are cool, and as unlikely as it may be to happen, you still dream of racing an Ironman.

I was always dreaming of racing an Ironman, even when I was in the middle of completing them.

This is my worry. I had a Pinarello TT bike before the P3 and whilst I was happy to sell the Pina, if I’d paid full whack for the Cervelo, it would have hurt my wallet (I got a NOS 2015 model in 2017).

Anyway, I’ll sort the garage out first and then work it out (by which time it will be winter and nobody will want a TT bike anyway

I still have my TT bike in the rafters of my garage, unridden for about six years and unlikely to ever be ridden again … I’ve gotten rid of my second bike, and am selling my third bike with no attachment but its the first bike that seems to stick.

I had no issues or regrets in selling my flock six years ago.

I just bought pretty much the same again.

Then treated myself to a nice BMC SLR02…

But does the tt bike spark joy?

But does the tt bike spark joy?

That’s a bit to close to Mrs FP for comfort.

I remember when I went from 8 bikes to 4, one of the losers was the Planet X beauty of a TT bike. I must have used it a few times in a few triathlons, but in all honesty doing the kind of very steep hilly tris that I attempt, it’s no use to me.

I don’t miss the awkward breaking, position etc etc, I miss looking the dogs bits on it. But would I ever get another, hmmmm, no, probably not.

We have no garage. My bikes hang from hooks in the cellar, a bit like all the rest of my victims. I say "my bikes’, but 3 teenage sons have adopted the same shared ownership model they apply to the contents of the fridge, my wardrobe, shoes etc etc.

I’d abgre with that, however you can take things too far - thinking of an old Eddie Izzard sketch about it being a circle of coolness with really cool, hip and groovy at 23:59 but at 0:01 its ‘looking like a dickhead’.

When you get to the REALLY aero bikes they can easily stray into the pug-ugly bracket in my opinion.

Like taking a Shiv (23:58) and the adding disc brakes and that ridiculous box/fairing behind the saddle, and before you know its 0:01

I’m sure this sounds like a daft idea but has anyone seen bikes stored outside on a driveway, locked to one of those bike shelter things you get in public areas?

not a shelter but i did have a lockable plastic box out front of a terraced house i lived in, but it was strictly for my commuting fixie beater as i wouldnt trust leaving a race bike , especially if youve been watched coming home which seems to be common these days.

Uploading: 1567168072278712247837.jpg… this is a sort of shelter I built for our “around town” bikes. They stay in it year round. We live in a terraced house, only access to back yard is through the house. My wife sometimes has an emotional response to bike oil and mud on her rugs, but apart from that it kind of works.

I live in a 2 bed flat so bike lives in spare room/hallway to be shuffled past. Not popular with the +1 especially with my dream for TT bike and tourer. Have thought of getting one of the outdoors containers you lock bike inside but not cheap or that practical for us either.

Can’t see that pic, doesn’t seem to have finished uploading.

I’m thinking there are two benefits - freeing up storage space, but also putting the bikes in an easy access point outside the front door so they get used more often.

Something like this, but smaller and, you know, less offensive to look at: 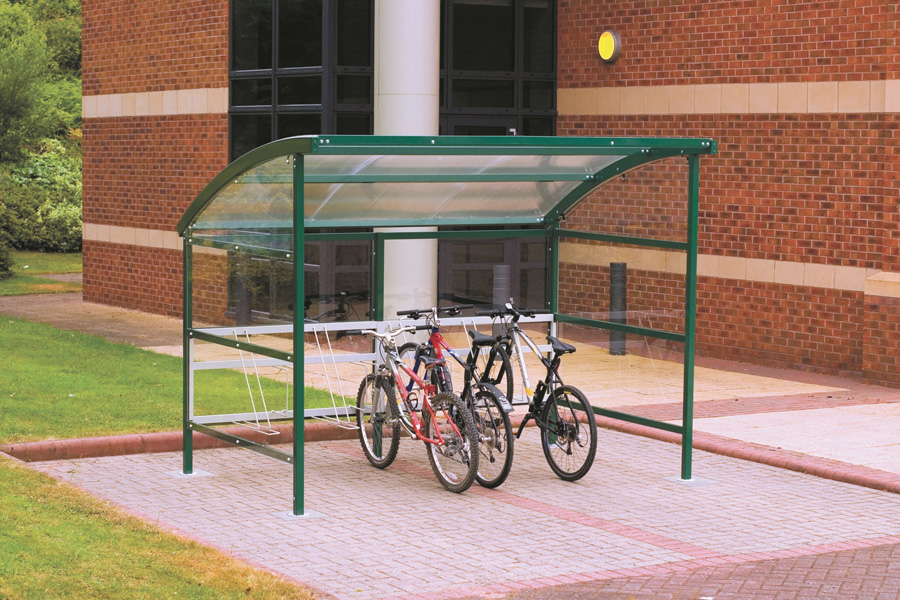 There are some pretty substantial ones designed for motorbikes that you would probably get 3 or 4 pushbikes in but they aren’t cheap. Some of them open like a clam shell so you can ride straight in.