It’s that heat of the moment thing isn’t it. You’ve run it all together. The event doesn’t mean a huge amount in the grand scheme of things. You look across to you mate and you naturally reach across and enjoy the last few metres together. Oops. Before you’ve even realised it.

In the unlikely event we entered a finishing straight together i’d feign to accept your generous act of camaraderie, then elbow you in the ribs and sprint for the win. Dont say you weren’t warned.

haha!! If i knew there was money on the line, i’d be up the road already!! This bloody extension on the end of my house, for some reason, isn’t paying for itself!

I’ve crossed hand in hand with a friends in a few trail races and ultras. But there is no way i’d do that on the roads or on a quick race. There’s too much bragging at stake!!

So the rule is against athletes finishing in a contrived tie. Is there a similar rule to stop an athlete slowing down to allow a team mate to pass to gain more championship points if they’re better placed on the overall standings?

from a TO’s viewpoint here, it certainly is interesting and I’ll see what the ITU Tech Committee puts out as a result of this, but I’ll try to give a bit more context here on the rules (I won’t go into the qualification thang as that seems to be a right issue given the short race and various Nat Fed rules/interpretations on how that now plays out).

1st off - this rule has nowt to do with the Brownlees Cozumel issue - that in itself resulted in a rule alteration different to 2.11.f which applies here

2nd - however the Brownlees “may” have been instrumental in the section of 2.11.f which says “However, athletes who finish in a contrived tie situation, where no effort to separate their finish times has been made will be DSQ” which was applied in this case. I believe this was brought in pre-2012 to prevent athletes crossing the line together just in case the B’s were lying in 1-2 so wanted double gold - or summat like that (not sure if IOC rules cover such a scenario).

3rd - the rule was correctly applied given that L and GTB didn’t attempt to race each other over the line so wilfully crossed together.

4th - another effect of rule 2.11.f is to try to ensure athletes “race” for a finish rather than work together and cross together with no attempt for one to beat the other. let’s have a race not a procession.

on the issue of a shortened run given the conditions a lot of comments are being made on “so what if conditions are the same in 2020?”. two things:

What a colossal balls up. 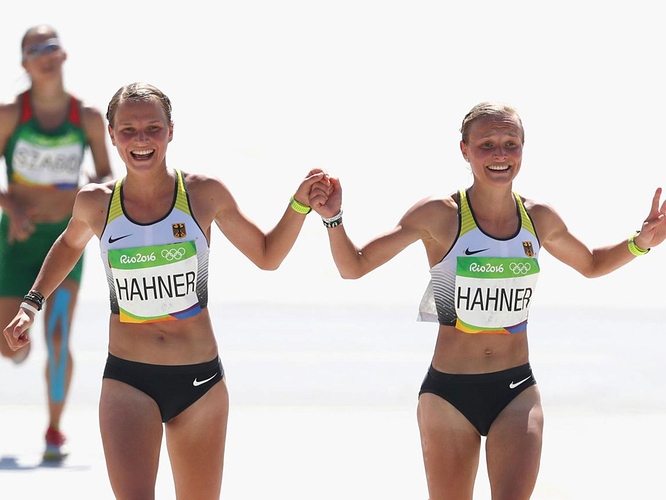 Instead of being interpreted as sisterly love, the gesture was seen as a way of gaining ‘media attention’

I can see the lawyers being the overall winners if Oly selection is affected by this.

I can understand why they didn’t race it, given the race had effectively no meaning (no auto qualifying for them, no ITU series points) and the race was shortened because the conditions were considered too brutal for a full race! Whether they “conspired to dead heat” or just didn’t care who crossed first could be argued, but while the DQ might not affect the GB selection, it could have changed others if they had criteria such as finish in top 10 etc.

As for GB selection, it looks like Learmonth, GTB and Holland. On form the 1st 2 make sense, Holland has not shown much form this year, but maybe she had banked on a top 3 in Tokyo being enough and put all her eggs in it. From a strategy point of view they would have all bases covered, with Learmonth guaranteed to be in a front pack – which if Duffy and Zafires are on form could be a pack of just 3. GTB will be close to the front and can run with the best bikers (Duffy, Zafires), then Holland or Stanford seem to have the potential to run the fastest split from the 2nd pack, and will be in the mix if the bike comes together.

Haven’t watched the men’s race yet, but assuming JB gets selected and AB doesn’t go, it makes sense to pick a domestique to get Yee as close to the front as possible off the bike. Only problem with that is, if GB have a dedicated biker in the pack, no-one else will work. A bit like the 2012 road race when even the other sprinter teams left all the chasing to GB and the break stayed away.

They have to select with the mixed relay in mind, too

Hmm not sure you’d put too many eggs in the Yee basket based on today’s result, he ran nearly two minutes slower than JB.

Mislawchuk/Stornes/Wilde - I doubt anyone picked that as the top three before the race!

They have to select with the mixed relay in mind, too

This is what I was thinking that selection policy is getting harder across all countries. Mixed relay inadvertently risks detracting/undermining indv event if best athletes not picked or race with relay in mind.

I can understand why they didn’t race it, given the race had effectively no meaning (no auto qualifying for them, no ITU series points) and the race was shortened because the conditions were considered too brutal for a full race!

however, there was $20k in total for 1st and 2nd and as flatmates, they could have shared that out between them if they’d come to an agreement that one of them legged it off and got a win - getting the DQ meant they walk away empty handed which for an elite triathlete is a big dent to income. I would suspect however they were unaware of the rule and did what they think was the right thing for them and in the process have learnt a very valuable lesson.

Do you know much about Alex’s current training load and his goals? I’d not get too concerned by his run today in a meaningless event

Not saying they didn’t care about the DQ, just that they didn’t care who won. Yes better to learn that now than next year, but then next year they would care who won! The rule seems to suggest you can’t conspire to dead heat, given they have photo finish equipment and can separate to thousandths, presumable it wasn’t a dead heat, so the infringement is for attempting rather than succeeding. I’m sure they could argue they were not trying to tie, merely not trying too hard to win. It seems it would be OK the stop and walk and let the other person jog across the line, it’s not like the badminton players who were eliminated for not trying.

Seems like an awful lot of travel for a “meaningless event”

The main event is the grand final where points are on the table. We still need to guarantee 3 spots for the men at the Olympics, although it is good as confirmed judging by current positions. Also its about him gaining experience at the standard distance and learn the course for next year without risking injury. Not one person in the ITU could beat him in a straight foot race! This is a kid that run 13:29 for 5000m on the track just a few of weeks back.

Also, given the point about selecting for the relays, Yee has to go. At the moment, assuming AB stays away, there are only 3 men anyway.

I’ve been surprised how unpredictable the men’s winners have been this year. There seems to be a different strongest runner from the front pack almost every race.

Seems like an awful lot of travel for a “meaningless event”

perhaps not so pointless where there are money prizes up for grabs ($18k for 1st) plus for many Nat Feds it’s an Olympic selection event and a chance to hone racing kills prior to Lausanne Grand Final in 2 weeks time.

I think BT will go with Learmonth, GTB and Vix Holland for the women; Jonny B, Tom Bishop and Alex Yee for the men. I’m not sure when selection has to be finalised however so matters could change after Lausanne and early events next season.