Too good to be true?

Came across this site via an ad on instagram, too good to be true do ya think?

Must be can’t get that site to even open 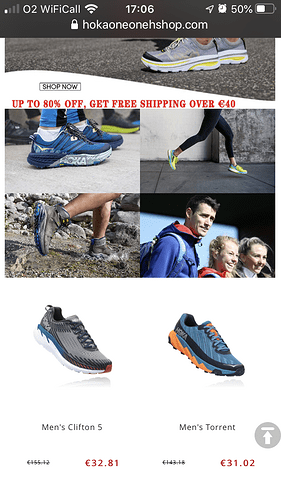 Ah yes my bad. Missed out the h.

No way I’d trust that site with my card details.

I think they’ve got it right in the fact they they hope people don’t notice that it’s actually wrong!

Fake Chinese site, like the old Salomon direct UK site that’s now disappeared. You may get running shoes, but they wont be Hoka.
Check the grammar on the FAQ page.

as they say, if it looks too good to be true, it probably is

I’ve stumbled across this site before. Definitely of the same as the old Salomon one which I was duped by

However there is “running warehouse” which does very cheap deals and is genuine. Mostly just selling off old stock but you can get new too. I did a lot of research before committing to those. The research wasn’t all positive so I just went with 1 very cheap pair and made sure I used a protected MasterCard if something went wrong. But it all ended up ok.