Tonight is a prime example. I did the TrainNow endurance ride. I thought it looked quite easy, as it was 7x5 @102%, but with 5min valleys which I thought would be loads. I just about got through it. If I’d picked my own equivalent, I’d have definitely selected something harder.

Has anyone done the TrainerRoad low volume middle distance plan? Using in the specialty block now for Cotswold 113 and planning to ride 87-90% IF on the day.

My question is, should I be turning the intensity up to 85-90% or should I trust the plan?

Thanks in advance for any advice. I read a lot on the forum but don’t post much as there are a lot more knowledgeable people on here!

My question is, should I be turning the intensity up to 85-90% or should I trust the plan?

When you take on a TR plan you’re usually saying that you don’t have a lot of time to train. Consequently their plans are focussed on generating the physiological adaptations you need in the time available - imo race specificity is taken into account but is a secondary consideration, which makes sense.

90% FTP for several hours is a lot imho but if you think you can do it, I would do your race simulations as additional rides outside - if you have the time. Put in a brick run after to see the impact it’s had on your legs.

Yes definitely need to get outside! Have spent plenty of time on trainer but need to translate to road now so will follow your advice.

Did 2.5h at 87% IF today inside followed by 5k race pace, which was hard but at the end I felt like I could keep it going.

Yeah I’ve been thinking about that which is why I did the test today. I’m following the TSS “How to cheat with a power meter” chart which says it should be hard but do-able. (Tried to upload the chart but can’t.) I ran well off a long bike leg at IMUK in 2019 so hoping I can repeat that, but may take it slightly easier. 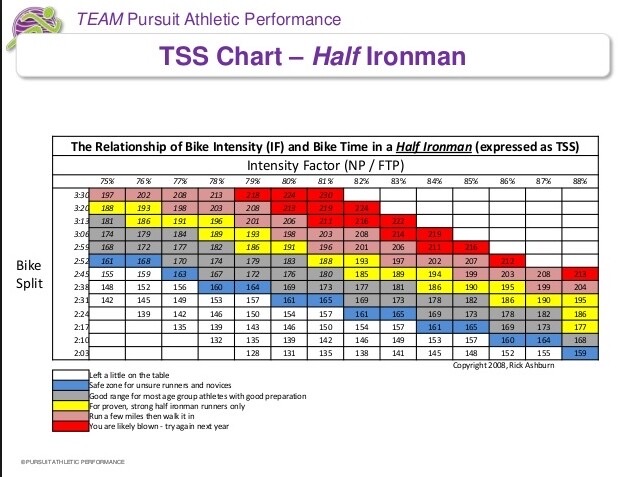 When was the last time you did an FTP test?

Yeah I’d also suspect your FTP is higher than you think, although with six weeks to go I’d be cautious about tinkering too much and focus more on absolute numbers and RPE.

But if you have already tested putting in X watts for a 2h30 bike and put in a stonking 5k after it sounds like you’re in a good place to me.

Did the ramp test two weeks ago at the start of the block, but maybe I had a bad test and FTP came out lower than reality. Agreed it’s sensible to focus on absolute numbers at this stage.

My aim for 113 is to push myself to the limit and see how fast I can go, so there’s going to be a lot of risk in the second half of the run.

Will see how further test runs on the road go to decide race intensity. Thanks for the advice.

What’s your middle distance background, and what are you aiming to run off the bike? Its taken me a few years, but for me 80% is definitely around the right target number. I’ve tried higher, but the small time saved on the bike has been lost multiple fold by a slower run.

Also, out of interest, what power are you thinking will be necessary for a 2:25? Obviously very individual depending on cda, etc, but that’s actually what I rode last year (207AP, 210NP, 0.79 IF). Lots more detail in my race review. I guess based on the training peaks chart, I undercooked things, but as I already mentioned, I find the payback of a stronger run a bigger overall time saving.

As for trainerroad plans, I used them for a few years. I think the reason you’re finding the longer rides “easy” is because they are working off the fairly standard 0.8 as a rough middle distance IF level. If you do truly believe you can ride that level and run well, then I suppose it would make sense to up to your intended race intensity/power. The whole point of the specialty phase is to lock in to race day type power requirements

Thanks for the detailed response. Yes I did think “this is off the chart” when I posted it so may be a bit silly!

Where can I find your race review? Would be good to read. 2h25m on 210w sounds like you have a fantastic position!

Then did IMUK in 2019 in 12h with 7h20m bike and 3h20m run. Followed TR low volume bike plan plus two swims and two runs. Aim was enjoy and aim for sub-12, which I missed by two mins. NP was 170 and AP 155 with FTP of 252 on road bike. TSS was 335, which shouldn’t be possible according to these charts but FTP may have been higher since TR doesn’t have you re-test close to race.

For this 113 Best Bike Split says 228NP should put me at 2h25m, which is 90% IF at FTP of 253 on TT bike. I’ve had a bike fit and feel like I have a good position with all the obvious and cheap-ish aero gains, although my bike is a golden oldie with 650c shallow rim wheels so not very fast! Planning to run 1h25m after that.

My aim for this race was initially sub-4h30 but I think this is now unlikely due to lack of swim training. In Scotland so back in pool today for first time but it’s my weakest discipline (1h12m at IMUK). Was hoping to go under 30m with six months of squad training and technique coaching.

Maybe I’m hoping to push the bike and/or run too much to make up for lost time in swimming and have to be realistic and reset my goal. What do you think?

You sound very similar to me. 113 was also my first middle distance. I think I ran similar, but did something in the high 2:30’s on the bike (although I think that was old shorter bike course).

You’re running does seem fairly strong if you ran 3:20 at IMUK. 1:25 is certainly possible at the 113. I did 1:29 last year, but with lockdown, it was actually one of my longest runs of the year. Ultimately you will never know what your limit is until you try, so maybe it is worth giving 90% a go and seeing what happens. But have you run a 1:25 yet, or is that just what you were hoping? It took me a long while to finally get my HIM run down to touching distance of my standalone, which I finally managed at the 70.3WC’s running 1:25 (standalone 1:19).

As mentioned before, for me, if I overcook the bike then whilst that might have saved me a minute or two, I’ll lose loads of minutes on a slower run. But I guess I only know that from experimenting and knowing that’s the outcome, so giving it a crack is certainly not a ridiculous idea.

What’s this? A 2020 report of an actual event that has taken place? Surely not? Why yes!! With the resumption of BTF permits from 01/08/2020, the August 2nd scheduled Cotswold Classic was the…

Sounds like you’re in a very similar position to me looking at all those numbers. Did you say it was Cotswold Classic you’re doing? If so, same as me.

I’m holding off on setting any power figures for a good few weeks, as i’m hoping to see some incremental gains over the next 4-6 weeks as training continues. From there i’ll probably do a couple of light simulations to test my theories. But i was aiming for around 80-85% FTP as my target power on the bike. Hoping for something like 220w (maybe a tad more if power increased in this training block), though i only have an endurance road bike and no bike fit. I doubt i’ll be the quickest, but hoping that’ll return something close to 2.5hrs. Personally i wouldn’t be using TSS to guide anything for my race plan.

Hoping to then do something similar on the run. Like @stenard has already said, i’d happily give away another 3-5 mins on the bike to ensure no blow up on the run, and then be reeling people in for the next 80 odd mins and finishing strongly.

I’m not a great swimmer, so i’ll be expecting/hoping for a repeat swim of about 35 mins or so.

I guess my advice therefore is you have a good few weeks so play around with the numbers a bit and see what they’re telling you. If you’re coming out of every session smashed, then they’re probs a tad high. If you’re not, then try upping them a tad.

No I’ve not run 1h25 yet - not done any standalone running races. I’m a bit scared of running injuries so I’ve just been doing easy runs in training up to this point (but almost all on hills so got some intensity and built strength). Planning on doing more race pace stuff over next six weeks.

I know I sound overambitious based on this lack of specific running and tri experience, but I have spent a lot of my life playing rugby and other sports so have got some form of training “in the legs”.

All that being said, may just need to bite the bullet and aim for 2h30 bike and 1h30 run with quick transitions and the swim whatever it is.

Thanks for the review - will have a read.

Cotswold 113 rather than Classic so not quite as long left. Would love to do the Classic as well but it’s too long of a trip. Doing the Aberfeldy middle distance in August instead.

Yes it sounds like we are quite similar so shame we won’t be racing each other! Think I will probably be aiming for 35 min swim too.

Thanks for the advice - sounds like a great idea rather than just sticking to the plan slavishly. “Listen to your body” seems a key thing to do, but it will be hard if my body is saying it can’t do what my mind wants it to!

Haha, yes i know what you mean.

To be fair, if it’s not your ‘A’ race and you’re willing to put it on the line without being disappointed in it not coming off, then go for the higher numbers. You’ll learn a lot either way. But if you’ve bulit your season around this, then i’d be more conservative.

When i did my last HM race i went out with the sole purpose of hitting a particular time. I was very ill the weekend before and kind of knew i wouldn’t be fully recovered. But i had zero interest in just running the best i could that day for a minor PB. So i went all out at my planned target. Of course i suffered massively and had the most miserable second half ever, but i just gritted my teeth and toughed it out. I knew it wasn’t going to go my way within 2km just looking at my HR, but that’s what i was there to try. And i have zero regrets, even if i could’ve knocked another min off my PB had i backed off a tad.