Emma Pooley has been going a little mad this year, with a ride pretty much every week that would take most normal people a month to recover from. However, this week’s edition seems even madder than normal. She’s not giving anything away what she may be training for 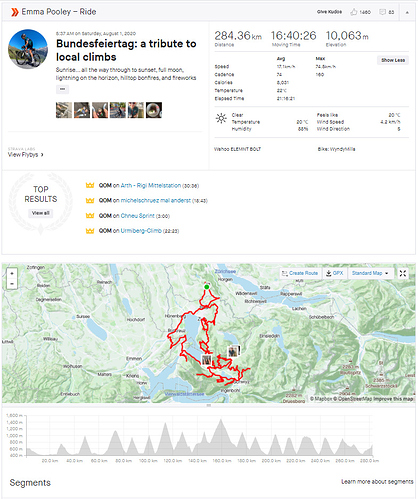 She could’ve done a “Trenching” there - amateur

Pretty sure I heard on OA that the Norwegian ITU lot did a round a mountain ride 300km++ ride in one day because they fancied it.

The elevation Pooley did is just nuts.

I’m guessing it was a flat course

I would have thought so, it’s South Norfolk and it’s pretty flat down there AFAIK. Blooming impressive though

The elevation Pooley did is just nuts.

She took the woman’s Everesting record recently as well

Not quite relevant, but don’t think we have a thread for random pro exploits (just LCB).

Few days ago at local tri club someone was matching me on a swim set, doing 100s off a 1:10 turnaround. Obviously I’m impressed by tri standards, especially when he’s claiming he’s bit tired from doing his first 5k run race the day before.

Turns out he only started swim bike or run 18 months ago, previously a rower. I’m Assuming he must have at least swam at some level but apparently not at all.

Scary if he keeps improving at this rate!
Mitchell Reinhard

The one where we all thought “There’s a guy who needs a media team!”