I’ve recently signed up to the free Training Peaks after the discussions here got me curious. The first couple of weeks I got the free premium trial with CTL etc. but having just come back from a 2/3 week lay off it didn’t really mean too much as the figures were still levelling out.

Now the free trial has finished the only real benefit seems to be getting a TSS figure for those sessions where Garmin doesn’t provide one but having gone back and added them to the spread sheet I already keep I can’t really see what it adds over the hours I already record. When plotted, weekly TSS matches weekly hours pretty much exactly. I do a similar mix of sports and intensity each week so don’t really see what it is adding. I realise if I did all hard sessions one week, or all easy, hours & TSS would diverge but that never really happens. Am I missing something?

The benefit of pro TP comes from plotting and planning your peaks. As you build your future workouts you can estimate (pretty closely) the TSS you will hit on each session and then see where that takes you. Some people for example may want to hit a certain TSS for their A race so they use that and work back from there to build in the training they need to do to achieve that. Others want to keep an eye on their ramp rate so they are not building up TSS too quickly and introducing a load of fatigue. Its also useful for getting taper right.

If you are doing similar stuff each week and not progressing your TSS will rise slowly and probably will correlate.

I am not sure what you mean by hours and TSS match? For me, currently my CTL is at 35 (because I have been a lazy shit recently). Last feww weeks my hours / TSS have been:

So they dont correlate at all.

Are all your thresholds set correctly? I hadn’t done a FTP test in a while and my commute was 18, when I redid the FTP it had dropped a fair bit and actually my commutes were 28 TSS so it makes a difference. 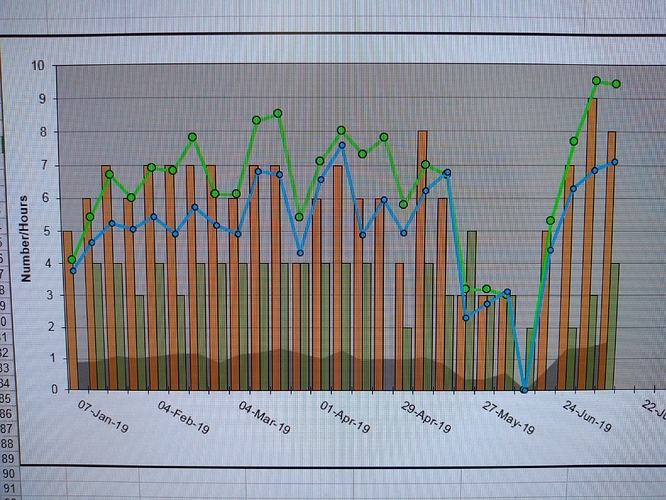 IMG_20190708_093503120.jpg2941×2206 3.69 MB
Thanks, I think it’s that planning element I’m missing. I rarely race and just train for enjoyment really (and at least try and keep my weight at reasonable levels).
I like all the stats from a curiosity point of view but don’t think I’m training in such a way to generate the fluctuations/progression intended.
The graph is from my own Excel file and you can see the green & blue lines for hours & TSS pretty much track each other the majority of the time. (Weekly TSS is hundreds on same scale)
joex 8 July 2019 12:32 #4

It will depend on how varied your training is, intensities, intervals.

Run, I rarely to intervals almost all my running is marathon, half marathon pace, so TSS lines up to time mostly.

Swimming, is not great for TSS calculations even though I’m doing a variety of workouts TSS tends to match distance covered or time.