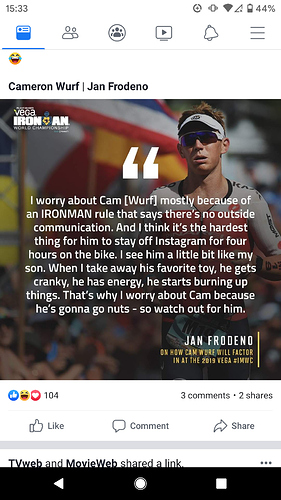 Pretty sure not many of the top pros will be wearing Nike; they don’t really sponsor many do they? Wurf is the only one I’ve noticed.

For the first time I’m going to be awake during the whole race glued to the
.
.
.
.
.
trail (probably literally given the likelihood of it being damp and muddy) on the Centurion Autumn 100
So no posting any spoilers

I’m aiming to watch the start, then The Mrs is out so I’ve got the kids dinner/bedtime, hopefully keep my eyes open to watch some of the bike.

It would be good to get a link to the FB “part 2” so I can launch that in the morning on the turbo, not sure I’m going to be able to get that without seeing the result though.

…then i flicked through them again and realised their training partners are wearing them…probably to keep up!

Nothing to add really other than I can’t bloody wait! I’ll be in the spare room, with beer and no interruptions.

Can’t wait to see how it unfolds.

Laptop on knee until wife goes to bed then hook up to tv.

Really looking forward to this year.

So many men could potentially be in the top 5 but I can’t see past a Frodo win. Sebi’s Assessment of AliB was good on Breakfast With Bob.

I’m not the only one who has to plug the laptop into the TV then! Our TV is 12 years old, and we’re keeping it until it dies! Finally had to replace the remote last month though, for a tenner. Sony TVs = Ronseal kit.