Self indulgent, willy waving: I am now all setup to livestream my Zwift Events on Facebook live

Did my first test on Friday on Tour De Zwift Stage 3 Cat A. My parents called me last night to tell me that it was a really entertaining hour (lockdown must be bad), at least I put in a decent performance to get a 3rd place finish.

Now a few bugs have been ironed out, and Discord is also added to the stream. My next livestream will be the WRTL race series tomorrow, where I will be racing as part of @Daz international BL13 race team. It’s a team time trial, so lots of potential for electronic and physical cock ups.

We came second in our first race, just behind Canyon Coalition, but ahead of Frenchy Fusion and ZTPL, the best teams in France and Poland Respectively. On paper we are the 4th strongest team, but pretty determined to push the others as hard as possible.

Draft @jeffb in, and I’ll be there on the edge of my sofa…

Why did you choose fb out of interest, and not YouTube? I feel YouTube is a bit easier in terms of linking to streams, and once you subscribe to someone you tend to get automated notifications of new live streams.

Be interested to hear how you synced in the discord chat function. I tried before, but couldn’t get OBS to accept the audio (in and out) from my Bluetooth earphones. Everything else was pretty straightforward. I was surprised.

It was only when you posted a screenshot of your result last week that I saw you’re also racing with Mox. He was actually the one who walked me through the practical nuances of livestreaming. His way was actually better than the GPLama video!

No idea how he’s still racing at such a high level with a newborn. I actually did the PRL Full yesterday with his wife!

Nice one Matt,
Good luck for tonight! Oh hang on, I’m with you

I’ll also be interested to see if you can sync in both your own mic, the game and discord audio. As Stenard mentioned it can be a right nuisance trying to get OBS/SLOBS to source multiple audios and cams at the same time. I’ve had a nightmare of late. Interestingly my new earphones have caused more problems than their predecessors. So I’ve switched back. Stenard you’re more likely to have multiple audios come through to the streaming platform if you don;t use earphones and everything is coming through the TV/monitor. BUT, then you have the issue of echo (as people voices/zoom is going into the mic with your voice).

I have a live stream as well as Matt tonight, running discord and some live data. Lets see if we both have no issues.

As for the race. Like Matt I’m thinking 4th realistic, anything more is a bonus. I did look at the average watts of the Prem teams and it’s obvious that wkg is not as important as team ttt skills. I think Prem winners last night averaged 4.5wkg for the team. Could be wrong but was def a fair bit under 5.0wkg. One thing I’ve learnt from my time sweeping in a large group ride every week is what I’m calling the ‘pump’ action

it’s where one rider can bring two packs together simply by pumping short hard (2sec) efforts off the front of the chasing group to 5-10m ahead of rider behind. Rider behind gets sucked in to the draft along with everyone else, then you pump again. Works a treat at 3wkg anyway, I’ve done it a lot and will do tonight to try to close the 30sec to Frenchy Fuzion. 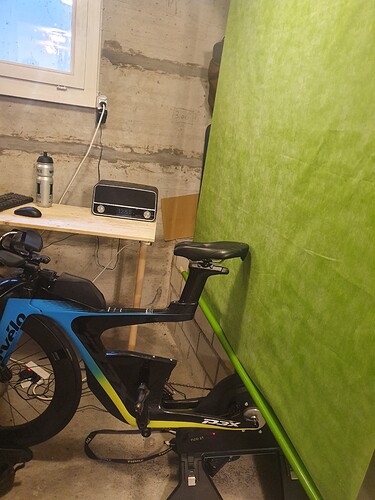 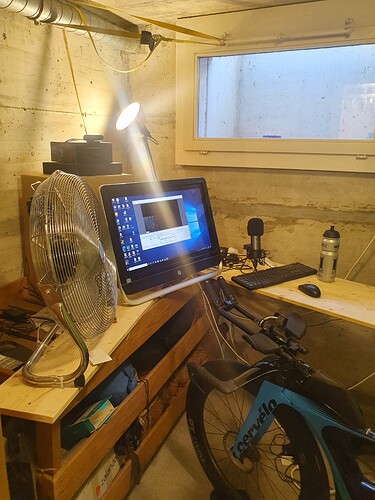 I went with FB for the really simple reason that I noticed that when @Daz livestreams, I get a notification, with one click I can follow him. I may play with Youtube later

I found the GP Lama tutorial really easy to follow, however, I also found a youtube instruction how to setup Discord. I did a trial with it on Sunday and it worked really well. I just hope that all goes well tonight. Normally on Discord I use a headset, but for the trial I used a mic and speaker, had no issue with feedback, and could be heard really clearly, however, the recording had a bit of an artificial sound quality.

Mox is a really strong rider, I couldn’t quite stay with him on the sprint. However, it’s going to be a great racing series.

Working at the coal face tonight so no ride for me.

One of our clubs young riders has come back to ride for our A team… it’s meant to be a TTT but may just be a holding on for dear life exercise behind him!!!

Nice, liking the insertion of a green screen. If you can share a link to your fb archive stream after, I’ll check it out.

(I’m assuming you can do that … the worry I had with fb live streaming was that only fb “friends” might be able to see it if it was on my profile, and in all honesty, I’d rather separate the two. Most of my friend couldnt care less about stuff like this, so having a standalone youtube channel seemed easier).

My TTT from this evening 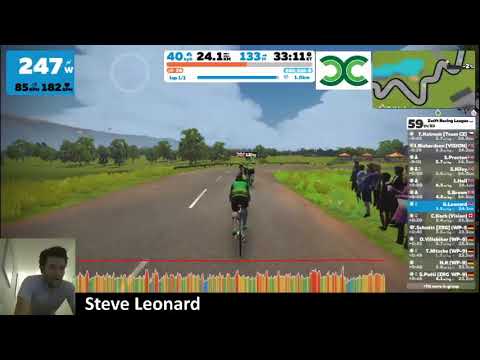 I didn’t offer much in all honesty. Two turns, and then the best I could do was use some energy to help plug some gaps in the line if they opened. I just couldn’t find another >350w effort, and the other guys were feeling strong.

Our time was was 34:39.842.
Provisional results are that we won our division, but we think there’s a couple of errors in there for two teams.

I see Christian wasn’t with you and Daz this evening Matt? His stream was him riding for our club

Hey congrats on winning your Division!

Most importantly we all finished together, had a good laugh (as much as you can in a TTT!) and organisation was good. Time gaps at finish so close. 10sec from Canyon Coalition in 2nd. Which could probably have been covered with a better start (two riders had tech issues which cost 5sec) and a ‘pump’ technique I thought I’d try out when on the front. It works in 3wkg group rides, but not in 6wkg+ TTT. Burned my legs out too early so could only hold on to group after that.

Managed to stream getting sound of discord and my mic on, which was a big bonus.

How did your stream go Matt?

congrats on winning your Division!

We came second in the end. Once results seemed to sort themselves out, one of the teams went from near last to first! Seems there are quite a few tweaks to these results … our official time has jumped by half a second. No idea why that is.

I had a tech nightmare, and binned the stream before we started as need the bandwidth for Zwift. I didn’t want any issue to hit the TTT

I’ve got 2 Wifi points in my house, the one I usually connect to (poweline adapter) failed, my main wifi is really flaky in the basement. This morning I loaded new firmware onto it, rebooted and its now running really well

Great result, That’s a very respectable time, which would have been competitive in Cat A

Facing the wrong way there mate…

Team has been promoted from season 1 (I didn’t ride for them then) but a step up and a tough close league. We were 9th, but less than a minute off the win.

but harder than it sounds as that involved turns at 4.5.

For sure. TTT’s are way harder than a solo TT. I really struggled with giving efforts at 4.8-5 w/kg and then recovering sufficiently to go again in the wheels. My long course tri foundation really doesn’t help that. Zwift makes that harder than I think it would be IRL, due to the quirks of navigating through the sticky draft in the lineup. As well as losing the draft in the twisty’s due to the stupid way zwift always corners you wide on tight turns.

It’s where I think lane steering could make a big difference. If there was a way to lock into specified lanes on the road, so that when you’d finished a turn you could just pull over to the next lane and everyone else could stay in a single line and then you tuck back onto the rear of the train, like IRL, then it would make the whole thing a lot cleaner.

But then again, the zwift quirks are some of the things that make it more challenging and interesting

So Matt, do you actually have a “page” where you can find your streams without you having to share a direct link to each one, or can you not do that using the fb route?

From my youtube share, you can easily get to my youtube channel to find my other races (if anyone were so inclined!) but I can’t seem to do that with the one video you have shared above

I do have a FB page, where all my livestreams are available

Matt Zwift Livestream. 1 talking about this. Page for me to record my livestream videoa