255 Triathlon - the longest single-day triathlon in the world. August 2021

might appeal to a few looking for something a bit different

I’d happily enter a long race like that … but not just round and round the same track. Not for me.

18 hours will be a bit tight for a lot of people though!!!

Yes, that would get a bit soul destroying. Running 11 laps on Sunday was enough for me!

Would be a quick bike course though

Would be a quick bike course though

Same problem as Daytona though (well worse actually) in being stuck in aero all that time. You’d have to back off your power a fair bit if you wanted to have any remnants of a hamstring left for the run!!!

18 hours will be a bit tight for a lot of people though!!!

that’s part of the idea - try to get a bunch of quicker athletes to sign up and not just those looking for a finish.

but not just round and round the same track. Not for me.

Well if they make such a claim, they really need to back it up.

Would love to see their faces when they google triverest

Longest race in the world except triverest and er, maybe some others

but doesn’t Triverest have a 29hr cutoff so technically not a “single day” triathlon?? hard to claim it is with that cutoff even though many will finish inside 24hrs.

Not exactly 200km around the Nurburgring is it. 52 laps

Yeah, same. I looked earlier. I was wondering if had been subtly deleted! 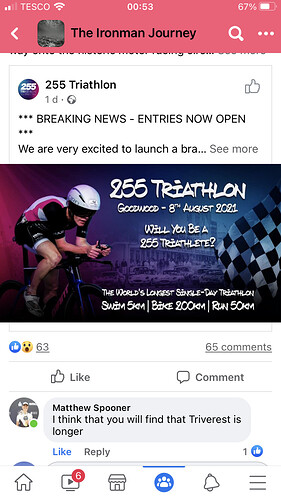 I don’t really get it, an uninspiring event with no redeeming features except they made it a bit longer than an Ironman. Surely doing an extreme X or Brutal is actually harder and more entertaining.

semantics, OK, Triverest has a cutoff of 26 hours, however, almost all people finished within 24 hours. The only vaguely interesting element to the 255 Triathlon is the 5km swim, otherwise it doesn’t look any tougher than most ironman events.

Fully agree with everything you have just said.