I will start by saying that Challenge Roth is a fantastic event, anyone who wants to do a special IM distance race should consider Roth.

13 days before Roth, on one of my last practice rides i came off my bike at over 60kph (40mph), dislocates my shoulder and tore my AC ligament. However, i was determined to race. Race target was to complete, but naturally i was going to race as hard as i could, so i was determined to compete as well.

About a month before Roth, a mate from my former club, George Gray contacted me. He had just won a place in Roth in a competition on Wiggle. Due to the late time, we agreed that George would fly to Switzerland, borrow one of my friends TT bikes and travel with me to Roth by car. Luckily i had reserved twin rooms, so he could stay with me.

We drove to Roth in pouring rain, george had only done one IM, Outlaw in 2021. He has been training for Geordieman in September, but a hip injury has kept him out of running for a few months. So on the journey we discussed race strategy. Like most people new to the sport, George didnt really have a nutrition strategy, so we spent some time working out a good plan and ensure that he would be taking 300 cals per hour on bike and run.

On Saturday morning we went to the Canal at 0730 for the practice swim. All went well, shoulder is stiff and very little power in left arm, but form is OK. The rest of the day was pretty uneventful. Tbe forecast for Sunday was hot: this would suit me well, i race well in hot weather, even so i knew it would slow me down a bit and i needed to plan accordingly.

Sunday morning and i ate a light breakfast of mueseli and oat milk. Another friend, Tim was also racing, and his wife drove us all to the start at 5am. A beautiful warm morning, water bottles put onto bike and tyres pumped up.

I was in the first wave behind the pros, it was a big wave as we were joined by the over 60’s. The start was the usual washing machine. I struggled to follow any feet as shoulder was much more comfortable in clear water than the choppy water following a group, I also struggled to swim straight, a result of a weak left arm, however, I was feeling good, keeping swim nice and easy and protecting shoulder. I got into a nice zone, as a result, I missed the first mark and swam 25m past it before hitting the rope to tell competitors that they had missed the mark… oops. Going back up the canal was pretty much the same, nicely in a zone, protecting shoulder, and really enjoying myself. At second turn around, I was much more careful to turn in the right place, and watched with some surprise as a big group swam straight past the mark, clearly it was easy to do. As I exited the water, and pressed the watch, I was stunned to see that I swam 1h16m, an almost incomprehensible time given my shoulder injury.

I love T1 in Roth, my bike was almost the closest bike to the exit, so managed a really nice time just over 3 minutes, then onto the bike. It was already hot at 0815 as I entered the bike course. This year, I was still at the front of the pack onto the bike, and the course was almost empty. Solar was amazing, people lining the road 5 deep on either side, with a tiny path up the middle. I finished lap one (85km as there is a 10km leg into Roth after lap 2) in 2h18m at 37kph. As I passed the swim exit on the start of lap 2 there were still streams of people just coming out of T1 onto the bike… this made the second lap “interesting” with decent cyclists like me, riding at 40kph mixed with many people riding at 25kph, the speed difference on the descents was frightening, I was in TT position at 65-70kph, approaching riders on their brakes at under 40kph. This must be a nightmare for the pros. From the middle of Lap 1, I had “collected” 4 other riders, I was pleased to see that the group was riding fair and maintaining 12m, Most of the time I was at the front, but at some points I did drop back, it’s certainly easier following, even with a 12m gap. There was pretty strict enforcement of drafting, and in Roth, the penalty for drafting is 5mins + a 1km penalty loop on the run, no way was I going to be hit by that. Second time up Solarberg, and the crowds had mostly disappeared, it’s a shame that the people at the back of the race don’t get to full experience. I am not sure if my power meter was under reading, my speed seemed OK, 37kph for the first lap and 36kph on the second, however, power numbers were super low, around 210w. A total bike time of 4h54m was respectable (@Jorgan will point out that this is first IM bike under 5 hours). But I know I could ride this course in 4h40m, By the time I got off the bike, the temp was 34 degrees. I did stick to my nutrition plan, and consumed 1500 calories, however, I think that I should have taken more fluid at the aid stations, this is an important lesson for Kona. On the bike, my shoulder felt OK, I had adjusted my position to be a little more relaxed than normal, and I felt more comfortable in Aero position after 180km than in any other IM that I have completed. I certainly lost time on the bike being far more cautious than usual, I was on the brakes for some corners that I know I could nail at full speed.

A 2min trainsition, and I was onto the run. I set off at 4:40 pace, but along the canal path the heat began to get me and I settled into a nice rythm, around 5m/km. Normally I would expect to run at 4:35/km, but as soon as I tried to speed up I knew that it would be unsustainable. A few people passed me, but I passed far more, clearly the heat was taking its toll. Despite being hot and a bit slow, I didn’t ever feel that I was in trouble. At each aid station, I poured as much water over myself as I could, I also drank at least 2 cups of water, and one cup of Red Bull or Coke, I did slow down at aid stations more than normal in order to makes sure that I as able to drink enough, but I never walked the aid station. I used my regular technique taking a Maurten Gel ever 5km, unfortunately I must have dropped one, so had to grab a powerbar gel at km35… it was horrible. I finished the run strong, passing a female pro and a couple of AGers in the final km. I finished with a 3:32 run, which was a little disappointing. I ran 8 mins faster in Lanzarote where temp was only a couple of degrees lower. My shoulder was the most painful on the run, however, I can’t say that it impacted my ability to run or my speed on the day, it was a mild annoyance

I think that others struggled much more than me. The runner about 100m ahead of me at the finish, crossed the line and promptly passed out. Athletes village was full of people being carted off on stretchers, and there was a stream of abulances taking exhausted athletes to hospital. On the other hand, I felt pretty good

I finished in 9h49m, and 9th overall in my AG, competing against a stacked AG field. Given my shoulder, I had as close to a perfect race as I could expect.

my first full distance in under 10 hours. However, I still feel that Sub 9 is possible. My Swim when I am fully recovered should be 10mins faster, I am sure I can take 15 mins off the bike, and another 20 mins off the run… still leaves 4 minutes to find.

Nice report, and congratulations on the sub-10! Considering the circumstances with your shoulder, you smashed it

I’m not an active poster but I really enjoyed following your progress in the sub-9 thread and am looking forward to seeing you nail it one day. Best of luck.

Thanks @elliott89, Sub 9 wouldn’t have been achievable even without injury, so that thread has a lot more life in it yet.

In a strange way, I probably feel just as pleased with my result as I would have done if I had gone sub 9.

Great report and brings back memories of my race at Roth. The canal tow path is a pure sufferfest and the medical tent is like a scene from MASH with all of the folk on IVs

I am sure that both are the result of your epic training and positive post-accident attitude.

Have you put in thought on what next year may bring? I think you’ve said other adventures are in store after Ironman?

Self supported bicyle adventure from the NorthCape to Tarifa. Finishing points Helsinki, Nice and Tarifa.

Next year is a short one, Krakow to Tarifa, 4200km

James Hayden rode with our club briefly a few seasons ago, I think he won that race twice (TRC) absolutely bonkers. Fair play to you. Belgium to Bulgaria this year isn’t it?

Yes, I think that they don’t announce the route until after riders have registered. Basically all you know is that it will be 4000km and will have 4 checkpoints… normally the top of a brutal pass

I don’t think they post a route. Isn’t up to the rider to submit their own?

Yes, you are right, I meant to say that they don’t post start and end points until after registration, but I may be wrong

Leading the charge up Solar 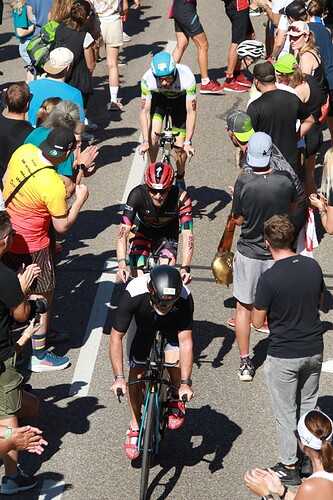 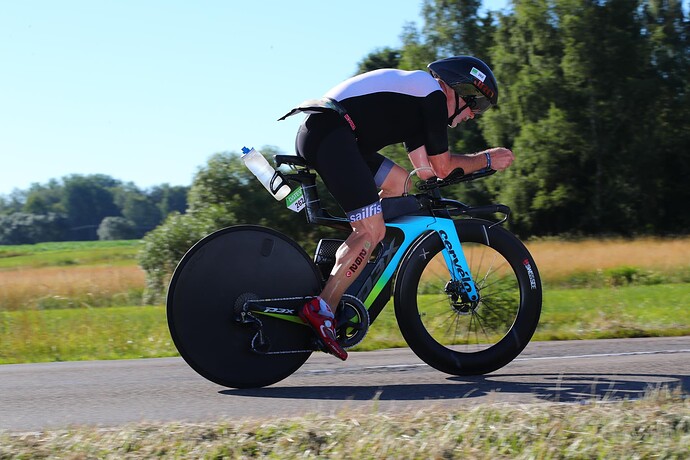 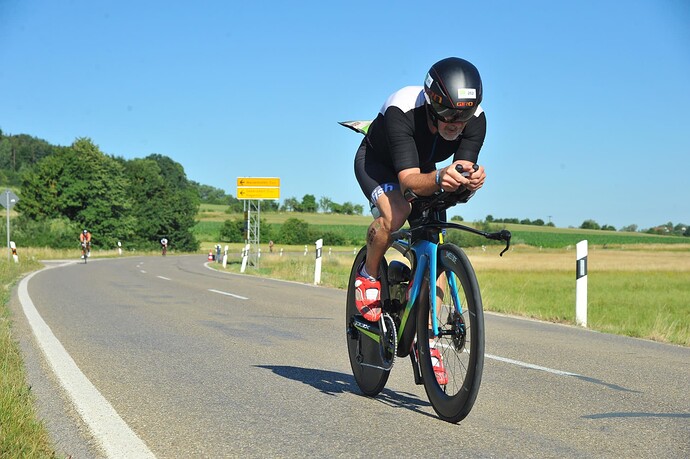 Looking good for the run to the finish 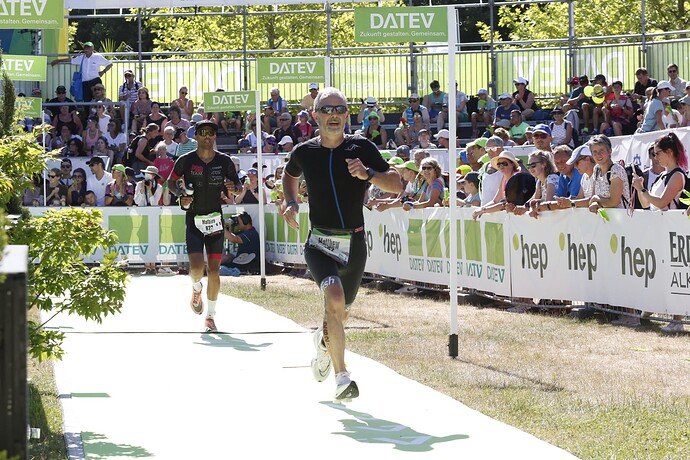 Solar or Saundersfoot for crowd action?

I’d go with the Solar, mainly because the crowds were on the road as per Matt’s picture and like the TDF. It was also only the second race in Wales and I think the crowds have grown but it didn’t feel the same when they were behind barriers.

Yeah it’s a different feel on Saundersfoot when you get past the barrier bit, they really close in. Must be amazing to have that all the way up!

Solar for me too