This popped up on my Facebook memories this morning. 9 years ago, my first ever tri - London Olympic distance.

I hadn’t swam that far since school, had never biked that far in my life and only really ran in team sports (outside of school).

I stayed with friends in London and borrowed a bike from one of their mates. I didn’t even know how the gears worked, we had to ring the owner of the bike on the day of the event “you what? You push the brake lever in towards the bike?!”. I was looking for the shifters on the down tube, as that was my only experience of a road bike!

Riding here with trainers and a camelbak!

I’d just been on holiday to borneo for 3 weeks and genuinely had no idea if I could finish, what seemed like an utterly crazy event. Can’t remember the time, but it was about 3 hours.

Little did I know… 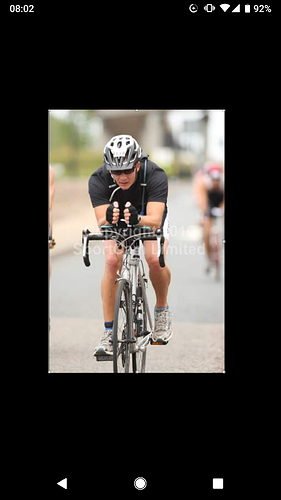 Given all that - fair play getting down on the aero bars!

London tri was also my first, one year later than you in 2011, although I thought an Oly was insane mainly due to the swim distance so did the sprint on my commuter hybrid. Thoroughly enjoyed it!

All things considered your setup looks better than a few I’ve seen posted on here in the past!

Nice. Mine was 10 years ago last April.

Didn’t have a clue. Swam 400m for the first time in my life (that I can remember) to start, in about 11 minutes. Beat the water to a foam in the first 75m, then it was a case of resting and regaining breath after each length.

Cold sunny day, remember running across frosty grass to T1. Hared out of T1 only to be told by marshalls my sunnies were on upside down.

For some reason I assumed I had to go back to my racking and rerack my bike to sort. Then I tried undoing my helmet…with gloves on…several times, before the thought ‘take your gloves off’ occurred…all that to just take my sunnies off and put them back the right way up. I’ve no idea what I was thinking.

Think the rest was (relatively) ok. A great day, lol.

Mine was the Jordans Bedford Mini Tri in 2006, couldn’t swim front crawl so glad it was only 200m but it was in the river and was completely covered in duckweed! That’s me at the back! 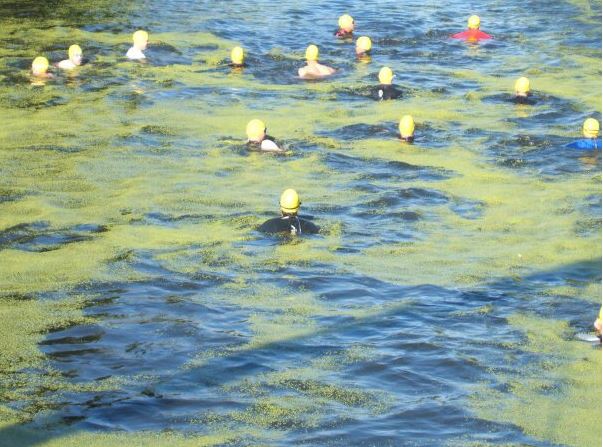 Found my times on my old blog!

The lovely Wensleydale in 2007 - hated the shock of the Semer water cold swim (1st ever outdoor Lake swim ooooooops), so swam breastroke penultimate out of the water.

Being a fell runner and cyclist the next bits were quite nice as I had all bar 1 of the competitors to pass. Didn’t manage to pass all of them, but had a great time and ended up with a fairly good placing for a first tri. It helped me with my confidence for second tri, that lovely old Ben Nevis MTB/Cross tri. The rest is history.

First Tri was Hereford in 2001. Outdoor pool right next to transition so you were out of the water and on the bike in a matter of seconds. The downside to this was the dizzy spell I had coming out of T1 and crashing just down the road. I got back on and finished the race. There were a few spectators around the course who would clap & cheer as I approached which then turned to gasps & oooohhhs once I passed and they saw the state of my back. The combination of pool water, sweat and a small amount of blood made it look like I’d been disemboweled by the end of the race.
My partner was pregnant with our son at the time and had a very difficult time of it (all turned out OK in the end) so that was may last race until I did it again in 2009.

We camped over & I practiced my transitions the night before with my family.

Needless to say all my careful planning went out the window as the race red mist descended & my kids roundly bollocked me when I finished.

Also, I’d also never wore a swim cap & had major leaks as my goggles were on top of it…as if swimming 400mtrs wasn’t hard enough FFS.

I did a triathlon when I was 13 at school. I could barely swim. I’m sure I did breaststroke/drowning rat stroke for most of it. Someone official looking was at the swim exit and I gave my goggles to her at the swim exit. No idea why, I never saw them again. I did the cycle on a heavy mountain bike and then when I started the run (which was laps of about 6 gravel hockey pitches), one of my shoes fell off and I just kept running - soles of my feet were ruined. My next one would have been a sprint 13 years later just before my first Ironman…

I did an off-road tri at the end of 2012 and it was really cold.
I tried to put a long sleeve base layer on in T1 and got lost inside it!! My family were laughing their heads off as the next wave came out of the pool and passed me.

Was horribly hard but I loved every minute of it. Bought a road bike and never looked back.

Before the start I was terrified as I’d never swum a continuous 400m before. Heart rate must have been about 200 when I was set off, needless to say I windmilled off like a lunatic, beating the water to a foam, before stopping at the end after about 3 lengths, exhausted and out of breath.

Repeat the above for the rest of the 400 and done in about 14 minutes.

Transition 1 was a comedy; I haired out only to be told ‘your sunglasses are on upside down’ by a helpful Marshall. I assumed this was some sort of rule breach, and ran back to my transition spot, reracked my bike and then tried to unclip my helmet with gloves on. I tried over and over, before realising removing my gloves would be a good idea…

To this day I have no idea why i didn’t just stop where I was, slide my sunnies out and then back in the right way up.

Bike was uneventful other than that feeling of everyone piling past and as a runner I did claw a few places back once doing something I was familiar with.

I only did the Tri as a bit of fun after achieving a long time running goal of VLM GFA with a sub 3:15. There was no way I was going back to pure running until I had at least achieved competence in Tri. I’m still here…

Wadebridge 1992. Outdoor pool; the water was so cold the other guy in my lane pulled out before he’d even done the 400m

Dorney Lake Sprint distance. 2011. There was a qualifier on that day with separate waves so all the fast lads were in that. I came 2nd in the open M35-39 and won £15. I thought an illustrious new career beckoned. Didn’t pan out that way. 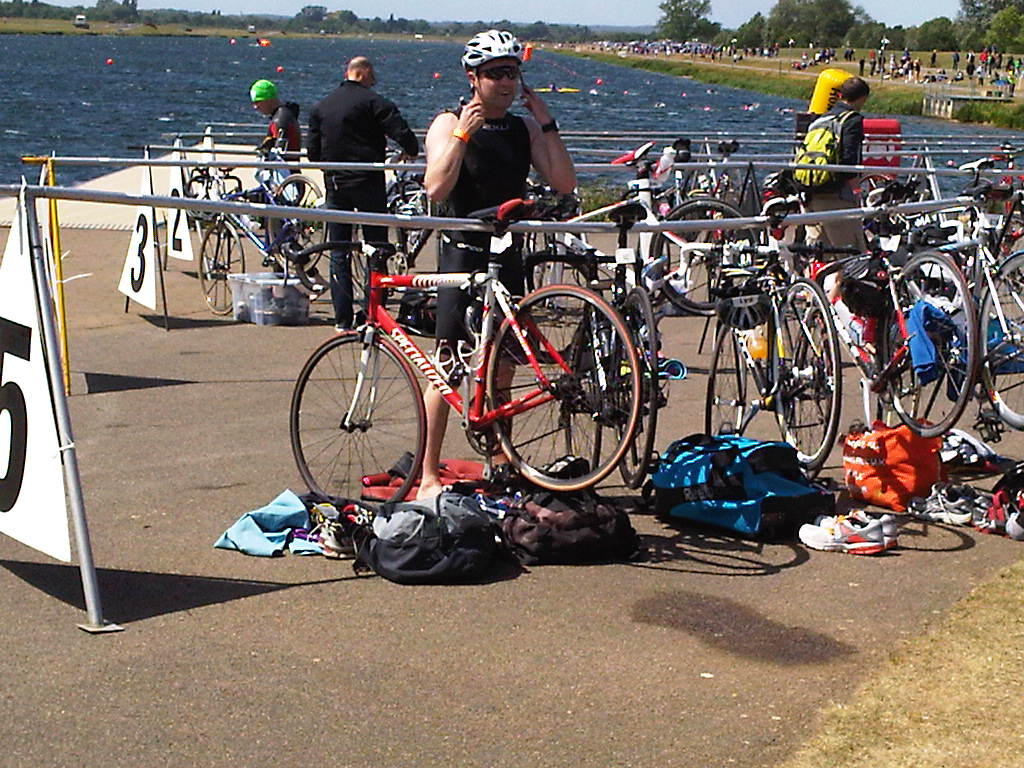 Ahhh Dorney. Possibly the most grim location for an early season duathlon, but on a hot summers day that water is lovely …

I was a REALLY crap swimmer when I started but at least I could follow the ropes in the lake. Makes me nostalgic actually. Must do a Tri next year.

THIS! Yeah I love this feature of swimming there

I remember a Tri at Dorney, one of the evening series where it utterly hammered down. I got changed into my wetsuit inside my car, went down to briefing fully ready for swim.

RD joked that ‘we’ve changed the format - it’s now a swim, a swim and a swim’. I hated the swim portion of a Tri in those days but would have happily stayed in the warm lake and not got out…