I was just about to post the same on the Velogames thread!!!

(with Bernal waiting in the wings!! )

Jut following the Dauphine - shame about Froome but it does mean that Ineos firepower may be blunted.

Saw Dowsett is in 4th in today’s ITT - what’s happened to him recently? Dearth of decent results.

Blowing his nose at 60kph, aparently it was windy.

I got the impression from one of G’s books that Froome does a lot of sketchy stuff on the bike, but usually gets away with it. Obviously not this time

But…Did he really need both hands to blow his nose?

Gutted for him. Was looking forward to him going for his 5th. Still arguably the greatest stage racer of his generation.

It’s going to be tough for him to come back as competitive as he is now.

I hope he gets back, apparently in intensive care, fractured right femur, a broken hip, a fractured elbow and fractured ribs. Could be career ending accident - hit wall head on at 54kph

Jeez that sounds awful. And the gloating in the Cyclingnews comment section is hideous!

Never a Froome fan - but heal strong Chris! This is a real shame for anyone, but particularly at this stage of his career; yeah I know he has 4xTdF, but that coveted 5th looks out of reach now imho. I would also argue he’s one of the cleanest multiple TdF winners too.

Yesterday, when first reports came out, I was going to write a flippant comment… but then thought about it, it clearly was not the best move to blow his nose, but all of us have shown some display of bad judgement at some point, he has probably blown his nose a thousand times at the bottom of a descent, he was just awfully unlucky.

The more reports that come out the worse it all seems. It shouldn’t matter what you think of Froome as a cyclist, at this point we should all think of him as a person, who is badly injured and possibly facing the end of his career

Agreed - I think he’d be lucky to get through this without some long term effect to his riding and there are plenty of other, younger riders coming through who will be a real challenge by next year.

It does blow the Tour right open. Even when G was comfortably leading last year, I think everyone was still looking at Froome and expecting G to crack and Froome to pick up the pieces. G might be the defending champion, but I reckon other riders probably still think his win was a one-off and something he’ll struggle to repeat. I think everyone will be out to attack Ineos this year.

Putting a positive spin on this, it does make the TdF much more interesting this year, weakening Team Ineos significantly and opening the door to other teams and riders. Will be interesting to see whether G can do it again or whether last year was his crowning sporting glory.

With luck it will also create more interest next year, when we all see whether Froome can come back and take a 5th win, that would be a great story.

Can’t see Froome coming back to top of GC contention after this. I think this year was his last anyway at his age. With Bernal and possibly Carapaz at Ineos next year they won’t want to hang around for Froome or Thomas again.

Like Jorgan I’m not a fan of his (or Ineos), he’s supposed to be a lovely bloke (a friend works with Ineos and another chap I know, knows him too) but this is horrible and hope he gets back to being pain free for general life if not cycling.

It will take a long time to recover and depending on how it goes, he might not even be able to compete properly on the TdF of 2020, which would be a massive blow for him. 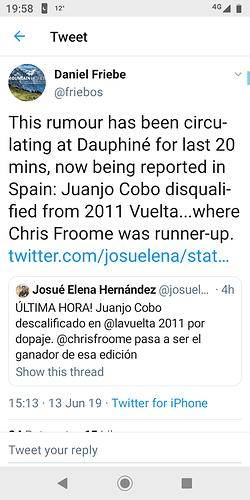 No one is safe anymore. Might be the start of a batch of retesting and failures

Winning a GT from intensive care must be a first.

That would have to sting for Wiggins; not being first ‘British’ GT winner.