And we laugh at Slowtwitch threads…

If Ineos wanted to take Froome out of competition for a while for any reason, I’m sure they could come up with a less elaborate, more difficult to verify excuse than a serious crash while people are recce-ing a course.

The flat earth, sky pixie believer who thinks its all to do the Freemasons is brilliant. As conspiracy theories go its about as wacky as it gets/

That guy seems to have a few screw loose

“neck fracture” always assumed minor given how late it was reported, likely just bit off transverse process; wouldn’t need 24 hour IV, and relies on very small non-displaced arm fracture for picture to be real. Definitely possible, and if so reassuring he’s not needing further care.

I’d say the oddest thing isn’t the lack of plaster/brace, but how fresh his skin is. Madness to jump to conspiracy theories though.

I’d say the oddest thing isn’t the lack of plaster/brace, but how fresh his skin is. Madness to jump to conspiracy theories though.

That’s what I thought too but then a photo taken a couple of days after might show a lot more bruising? Time is too precious to waste on reading that masonic rubbish. If it was doping related conspiracy surely a good old case of ‘rider gets mono’ would suffice like they used to.

Madness to jump to conspiracy theories though.

How do you explain that Bing suggests the picture of Froome in the hospital bed is most like pictures of babies then?? 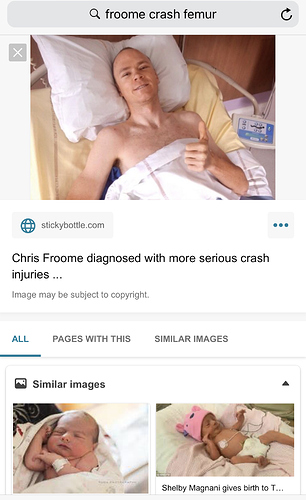 This was being discussed on another forum and a trauma dr weighed in. The neck fracture is on the c7 vertebrae. Apparently a neck brace there is not needed .

As for the lack of brusing and grazing who knows. If hes gone wallop into a wall sideways and smashed that side of body would there being anything on his face? Hes not slid along the road.

I cant see how it’s a doping conspiracy. Surely if he wants to return at some point he has to remain in doping process and could be tested at any time.

Just slightly baffled how people have so quickly jumped on it’s a fake.

Newsflash Geraint Thomas might be a mason too. Crash at Tour de Suisse

ETA: looks like nothing broken but big bang on his swede.

ETA (again): I wonder if Garmin are happy with him wearing a wahoo tickr? (at least that’s what it looks like of the photo of him sat on the floor looking dazed.)

Maybe like my kids, they have been on this stuff and Ineos have been told to sort it #conspiracy 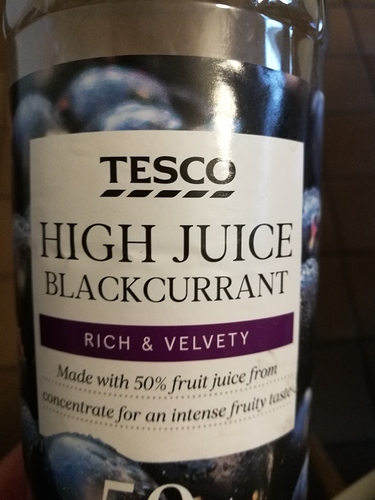 Breaking news, Dave Brailsford to ride the TdF as Ineos has no risers left in one piece.

So. Do we think he’s going to Israel then?

Quite a few outlets reporting that he’s close to signing a mid season deal.

What does he do, sit on the Ineos train lead out for the 3 weeks like Doumoulin did 2 years ago and hope to pip EB and GT on all the hard stages?!

I think it’s pure speculation. Few teams will have the cash to pay him or the infrastructure he’s used to. Also very few teams that have strong enough domestiques to support a challenge. The stronger teams don’t really have another slot available for a GC leader.

I can see him staying and Geraint being the big loser in this as Ineos back Bernal/Froome for the Tour, Caraoaz for the Giro and one of the young guns for the Vuelta.

Before Froome’s injury last year, their was talk Ineos were targeting a sweep of the podium. Must be a similar option this year if they can keep everyone happy.

A 1-2-3 finish in a grand tour with teams of 8 riders would be a big ask, unless the opposition all implodes. It’s likely that you’re always going to need to sacrifice someone in the mountains to keep the top spot and if you’ve got 3 guys who think they’re in contention you’re not going to have too many volunteers to take one for the team.

I’ll be pleasantly surprised if Froome ever gets back to where he was after a year out from that accident. He’s 35 now so is at the tail end of his career.