Google is stuck on showing local deals for me and I’d prefer a UK mapped model.

That deal ended at the end of September however. The best I’m currently aware of is if you know anyone with vitality health insurance. They’re doing 25% off the 830 via that. I have a mate with vitality through work, who has no intention of buying a Garmin through it (you can buy one device per year). I’m waiting for the 945 to be available through it

Thanks - the existing Garmin has lasted 5 years, and 5000+ rides, 15,000 miles so its been pretty good. Not to mention the times I have dropped it.

What do you like so much over the 520 Stenard?
My 520 has been faultless, tho I did see the mapping on the 530 and got a bit jealous. Also has the climb profile - but not sure how much that would be novelty for me.

I still think the 520 is great, and I’ve kept mine and am continuing to plan on using it for my tri racing. Mainly as it’s now less desirable to steal!

@stenard can the 530 be used as a head unit for your turbo trainer so it controls the resistance?

Yes, as can the 520. They’ve just released a beta for the 530 that now means if you ride a simulated course, it will actually give you the maps and elevation profile pages too. Not tried it tho

Interesting regarding the beta software on the 530 and when you try it out let us know.

At £135 that would definitely seem like a decent deal. But the 820 was renowned for some problems (not sure if fixed?), and personally I didnt want a touch screen only device. Buttons for me are far more preferable in gloves

You can get maps on the 520, although as @stenard mentions only a limited amount as the device doesn’t have that much storage. But you should be able to load enough on to cover your local roads. 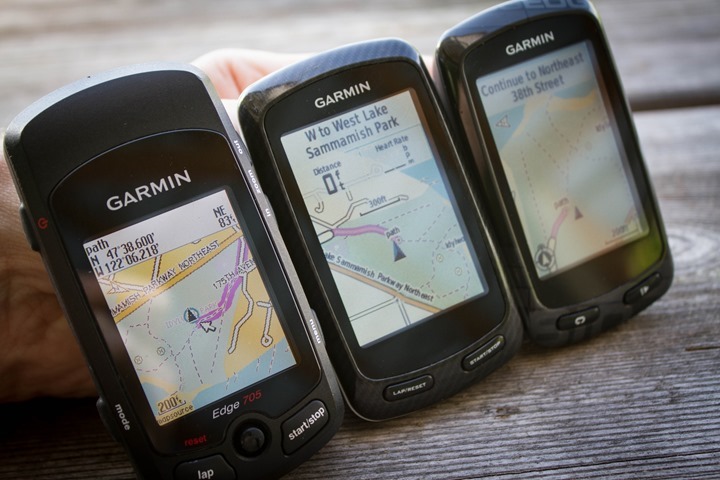 How to download free maps to your Garmin Edge GPS

The Garmin Edge series of cycling computers is roughly split into two categories: Those that have a mapping function, and those that don’t.  Mapping in this case means that the units also have routable navigation – just like your car

Thanks Rob - I do have maps already. They just aren’t as pretty (or easily readable) as the 530.
Not sure there’s enough there to make me upgrade. My only gripe is my battery - with Nav - only gets me a few hours now. Without Nav I’m all good.

I think a lot of the issues where fixed with firmware. I’m picking one up today so I’ll let you know in a few weeks!

is code available for BC

I’ve not yet bought but my understanding is that the processor is much faster on the 530 so you don’t get that annoying lag in routing updates every so often.
I’m upgrading from an 800 mind you but I think the processor in the 820 was much the same?

https://www.evanscycles.com/garmin-edge-530-mtb-bundle-EV365217
This deal is insane for a new device. Only £180 with all the accessories

I’m almost disappointed I bought earlier in the year! I actually kind of want an edge remote

I’d actually be surprised if this is beaten throughout the entire black friday deals period, in terms of a brand new device with such a hefty discount.

Not surprised at that price. It was almost giving it away. They clearly just wanted to clear the MTB stock for some reason. The standalone device was still £260 at the point they were selling this bundle! If you sold the edge remote and speed sensor for the going rates on ebay, you could have had the main device for a little over £100

You got a VPN? Should sort you out for your chosen Internet market.