I am mid foot striker, or am I

Over the years as I have got faster I have naturally moved to being a mid/forefoot striker, or so I have spouted on many occasions.
My shoe wear backs this up, I have very little wear on the heels and it is the front of the sole that goes through to the foam (I wear my shoes for a long time).

However every picture I see from races suggest otherwise (i.e. the marathon last weekend), it always looks like my heel is striking first. My leg is stretched out forward with the foot toes pointing more towards the sky than the floor.

So my question is, is this normal, is forefoot striking actually a myth, or do I just have to accept I am heel striker.
Or do I run midfoot in training and then when I race and pushing harder I become more of a heel striker? Which is the opposite to what I would have thought…

Next week I am going to try and get someone to video me running a fast 5k to see if the same thing happens there.

I remember Stenard mentioning this when he was showing a picture for some reason as well.

Are the pictures you are looking at from throughout the race? People do tend to change as they fatigue through the race. You’ll often see peoples cadence drop and they go to a heel strike later in the race.

Also, video is king, pictures provide limited context and can give a false impression.

I remember Stenard mentioning this when he was showing a picture for some reason as well.

Interesting you say that. I see the same from my photos, yet at a physio appointment a while ago I wore my old tri shoes (retired, but I still keep them for just walking to the gym/pool, etc) and the physio said it was helpful to check my shoe wear. She also said I was a mid-foot striker based on shoe wear. Which surprised me. I’m somewhat the reverse of you … I had always thought based on photos that I was a heel striker.

I think that video I put up recently was more illuminating. With my officiating hat on, a photo is worthless in seeing what actually happened in any particular event. Any photo can be chosen to selectively make something look a foul, or legal. I imagine the same is true of photos and running form.

I wore my old tri shoes (retired, but I still keep them for just walking to the gym/pool, etc) and the physio said it was helpful to check my shoe wear.

Checking shoe wear on shoes you also walk in .,… sounds like a good way to get inaccurate info no?

Fair challenge, but I walk the occasional few hundred metres in them. I ran in them for >600km!

I would say it doesn’t matter in terms of one being better than another.

Having your leg out like that, with your toes up is normal for just before you land. (I’m assuming you’re not landing like that.) As you’re moving forward your foot will come back towards you a little (relative to you not the floor) and your centre of mass will most likely be just a small distance behind the foot as you make contact. Toes up is creating a bit of pre-stretch/tensioning of calves for landing. I’m a mid-foot striker but again, like others have said, as I tire towards the end of a marathon will move to heel strike.

If you have a google for images of sprinters, you will see their legs extended out with their toes up a bit and they’re definite fore foot strikers.

This is always from all parts of the race, tbh on Sunday I was running strongest at the end of the marathon!

I am not massively phased by it, but I always surprised to see my foot firmly on the floor when I feel like it is only my fore foot and was interested in others opinion.

As I say I am going to try and get someone to video me finishing a 5k to see how I roll (pun).
(Though the guy I had planned to ask ran it in 30 minutes this week with a broken arm so that plan may be off!) 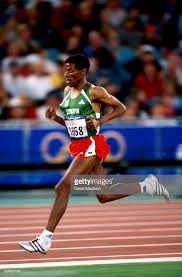 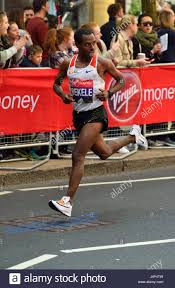 Static images are not the full story

You’re h, but due to years of training and racing on the track Bekele always ran with his head turned left. Don’t go showing a picture of Geb and his massive pronation either!

What would you suggest @explorerJC? You’re a respected expert on this matter in these parts. But that’s two comments (this and the one on @Chriswim thread) where you’ve very deliberately pointed a negative, but then left it there…

to allow people to think about the solution rather than just taking someone else’s word for it…that is, i assume, how they can accept much of the dogma that exits…

Absolutely. I don’t think anyone suggested where he should or shouldn’t land or any other dogma?

About interpreting sole wear. I’m kind of sceptical. Most runners strike the ground with their heel first. I’m no expert but kind of imagine maximum force delivery, when pushing off, is through the forefoot? So won’t even a heel striker have greater wear at the front of the shoe than the back? How much does sole wear really tell us? Maybe I’m speaking through my Asics here of course

firstly, shoes tend to be designed to absorb the impact at heel strike, secondly there is a range of friction which wears soles as the foot rolls through to toe off…but no, overall force is the same albeit spread over a wider area or if you are shockingly inefficient at toe off…

and your centre of mass will most likely be just a small distance behind the foot as you make contact.

I thought so but didn’t understand why. I wasn’t telling him do to do anything. I was just trying to describe what was most likely happening based on his description of the photo. There was no advice or dogma from me.

Who/what was it aimed at?

I am not massively phased by it, but I always surprised to see my foot firmly on the floor when I feel like it is only my fore foot and was interested in others opinion.

Sorry YKK I missed this earlier as I was busy with work. Do you mean that you’re surprised that you’re on the whole foot during the stance phase?