I’ve put the course into RideWithGPS. Link here for you all: 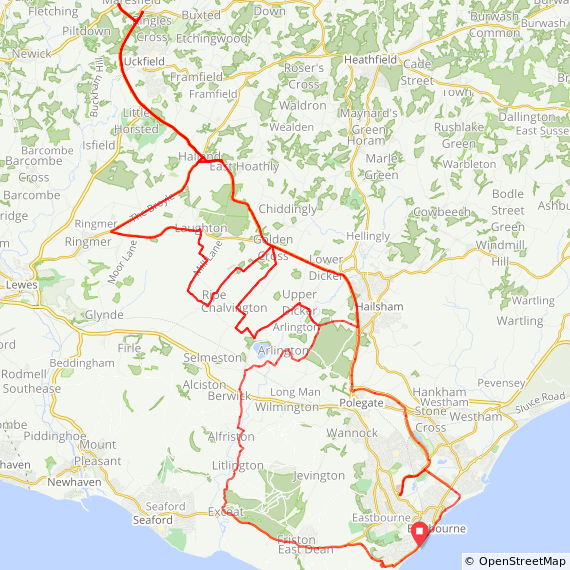 Its come out slightly short. There are some confusing junctions and loops so I think I have missed a turn somewhere. Interestingly they are saying 940m elevation, but this as got nearly 1400m

Certainly does look like a fast course. BBS giving me a 5:30 split on 200w, compared to Lanza which is nearly 7 hours.

Roads are going to be terrible state. You can tell when you are in East Sussex as you head down the A27 as your car stars shaking. A lot of the route uses the A22 which is the main North/South trunk road through the county. But is narrow single carriageway in most places. Can see some irate drives getting the hump. Rest of it is narrow B roads

but the bike route sucks.

Not for me. I’m done with shite bike routes. Did anyone mention Hamburg…

Yes, that would likely be a good bet to take. I don’t mind potholes actually, it’s when they don’t flatten the road properly, so the whole surface is lumpy, or they use chipseal that my blood boils.

So most UK roads then!

That said, our Motorways are the best I’ve driven tbh. But they’re looked after nationally by Highways Agency.

Bloody well going for that. That’s a fucking steal for an iron distance

So you’ll be hot on your keyboard at 9am tomorrow @iwaters ?

Have to say (and I don’t know the area) - the organisers have a great reputation and I have been impressed with their social media posts and responses. I already have an event that day, otherwise I’d have been tempted. Starts with a jump off Eastbourne Pier too!

Yes the low entry cost has swung it for me. The bike course isn’t that inspiring and the swim might be tough, but swimming is my best discipline so that will be ok. The run will be good and its a nice easy weekend out for me. Kids and grandparents get to spend some time together, dont have to worry about hotels and the like, wife can drive home after

I was joking about the jump of the pier on FB. There was a always a story about jumping off the pier when we were young. That the arcade pople chucked all the broken fruit machines off the end of the pier and you would land on them. Think it was made up to prevent people from trying it. Thankfully its not jumping from full height, a platform about a foot from the water. Would rather the opportunity to easy my way in than jump straight in to be fair.

Same. Swimming is my best discipline too, but I reckon any sort of jump en masse could be carnage!

I spoke too soon. I have two events that weekend now. Isoman has just been announced! Entries open 1 December.

It’s nice to see in a way; it reverses the trend of Ironman ‘punishing’ competitors like Challenge, by holding events on the same day as races that Challenge have taken over when IM are no longer interested. St Polten/Graz 70.3 being the latest example.

Someone asked why the put it on the same date. Their view was that most people only do 1 IM distance a year so take your pick between the two. Pay double and do IMUK

Nice pricing. Given the gf’s family are just along the coast, I would have given it a go if I wasnt already booked on for a European IM. £140 would be rude not to if in the area/have a connection to the area, and the diary is free!

Fair point. I don’t really think most people would be tossing-up between the two; they either want to do an “Ironman” (in Bolton) or ‘something else’.

Hmm, as a destination I worked at last year, I can’t say it appeals. As others said, the sea is what you’d expect on the south coast of Britain. It’s not all pebbles, there’s a thin strip of sand at the waters edge. I wanted to cycle the A267 but I think it’s the parts further north than the course.

All said, £220 is probably the value you’re getting rather than a bargain.

Has anyone signed up?

My budget doesn’t usually stretch to do 2 IM in a year. This was a no-brainer at 140 quid and fits in well with IM Wales!