Hi, I’ve looked elsewhere and found some pretty helpful info but looking for some off here too, so far all the advice I’ve had has been good!

Just after some pointers of fueling the bike leg for my first ironman. Hoping to average 16ish mph so approx 7 hours on the bike. So far in training I have done upto a 4 hour ride into a 45 min run but beginning to get hungry towards the end of the run.

Looking for recommendations of what people eat or fuel with plus electrolyte/ salt info as I’ve not been anywhere near that and drank just water or cordial mix.

Food I’ve had on the go have been from bananas, soreen, flapjack but ideally don’t want to be laden like a donkey with too much food so ideally high carb/ energy for little weight.

Still 17 weeks out so plenty of time to experiment.

Note I don’t mind gels for the run leg but to take them all day is a big ask.

Eat in training what’s provided on the course and get used to it.

The manufacturer will recommend how frequently to eat on their website. Use this as a base to practice and find out what works for you and your effort levels.

I’ve had an eight hour Ironman bike, and a sixteen hour Ironman, and I can honestly say I have never actually felt hungry once during or after a race. If you are working appropriately hard the blood flow is diverted away from your digestive system and it is hard to eat - hence the gels and bars and various drinks we use to fuel.

You’ll need to start having carb drinks, if you want to avoid carrying a pantry with you. Find out what the event is using, and try to buy some. I would generally have a gel near the end of the bike in a race too, but not training.

I have a box on my top tube with cut pieces of flapjack; can normally get 1000kcal worth in there, plus bananas from aid stations on race day.

when I started doing LD events I used energy bars plus fuel on the bike leg and gels on the run, but found after a couple of events that I’d be left with this mass of undigested bar in my gut which would make me feel bloated for the run. so I adopted a liquid approach - fuel, water and gels alone. felt much easier then whe on the run. I also found caffeine gels gave me a rocket boost when used at correct times - just before the end of the bike; and midway through the run when HR was flagging.

One gel every 20 mins. You will need 21 gels, put them in a bottle and at a little water so that the flow out. Every 20mins take a good swig from bottle. If prefer to mix things a bit, have a piece of flap Jack or similar alternating with gels. They normally have half bananas on the course so you can grab on at feed station. Personally I find just gels is the best, yes you will get sick of them, but they work fastest with least stomach issues.

I’m a big believer in SIS beta fuel used 2 750ml bottles and a mix of bars & gel also used a 500ml bottle in transition before the run. I use gels, banana and haribo on the run. Beta fuel is also easy on my guts.

One gel every 20 mins. You will need 21 gels, put them in a bottle and at a little water so that the flow out. Every 20mins take a good swig from bottle.

This is what i’ve always done. I’m going to try a different approach this year, and carry a bottle behind the saddle of heavily concentrated carb drink instead, and stick a slug in my ‘between the arms’ water bottle each time I refill, and supplement with a few gels. I can stomach the carb powder based drink as not just fuel, but also a water source, but not a gel mix… and feel that a constant intake of small amounts of carbs will work better than a bigger hit every 20 mins

[quote=“magnacarter, post:7, topic:1359, full:true”] I’m going to try a different approach this year, and carry a bottle behind the saddle of heavily concentrated carb drink instead, and stick a slug in my ‘between the arms’ water bottle each time I refill, and supplement with a few gels.
[/quote]

That’s what I started doing last year (no gels), and will do this year, but keeping things simple for the OP as it worked well for me for first couple of years

yep, its got me round a fair few IMs thus far.

I don’t think I’ve ever used course nutrition on the bike, other than water. Like Jorgan, cut up flapjack and bar early on the bike, then switch to gels second half. This year I’ll be having an aero bottle(s?) of Maurten in the frame triangle. PH1500 in the aero BTA bottle up front. Carry a second bottle of that BTS, and for a full have some of the tabs in my bento to mix more with water on the move if needed.

For Wales, I’ll maybe just go with the tabs and on-course water to save the half kilo of the second pre mixed bottle BTS

This is what I do. I have the whole IM bike leg ( 11 Zipvit gels) in one bottle on the down tube, with a little water for viscosity.

Then I have a water bottle BTA to throw down at aid stations.

I also have another bottle with half of the gel mix in Special Needs. I don’t use this bottle but it’s insurance if I lose my main bottle, then at least I have 50% of my nutrition salvageable.

I carry 1.5bars of ‘something’ usually Torq, in my trisuit pocket, just in case I really want something solid.

I follow the 3 gels per hour rule using Torq gels or Cliff shotbloks to mix it up. I also like the beta fuel for the amount of carbs you can get in 500ml. I’ll be using this for my long course road and off road duathlons. On the run I dispense the gels into a gel flask with a touch of water and take fluid from the aid stations.

This year I’ll be having an aero bottle(s?) of Maurten in the frame triangle

Looking into doing this too, what aero bottle do you have? Seems like the Elite Crono is the only option but reviews don’t sound great.

Of the bottle? I’ve never had any problems. I have a few of them. You just need to give them a puff of air after you’ve taken a drink from them. That way it “bloats” them back up again and they lock into the cage securely then. I think the issues people have is that they squeeze fluid out and stick it straight back in, and the bottle retains a narrower width that can mean is works its way loose

See if you can get a Specialized Virtue somewhere (ebay?); I have used one mounted on either downtube or seattube without issues. Stayed-put on cobbles with a bit of extra Velcro to make doubly sure.

Which race is it? I think it’s probably much easier to fuel properly on a primarily liquid fueling strategy in a hot race where you can easily get through 10 bottles on the bike leg, compared with a colder race where you aren’t losing as much fluid in sweat and probably aren’t as thirsty.

The aid stations on the bike leg can be pretty stressful (and dangerous), so I usually just pick up bottles and carry my own bars and gels.

Yeah the bottle. Just read a few reviews mentioning it pops out a lot/ rattles but as you said it could just be people not using it properly. Think I’ll give it a go for the price - why not.

@Jorgan Had a quick search but can’t see any at the moment, will keep my eyes peeled though!

Thanks for all the great info guys.

Gonna try a few things in the coming few weeks starting Thursday on a 4 hour ride. Think I’ll go for a bottle between the tt bars and a second in the cage with gels mixed into the water.

Have 500 kal flap jack into bite size pieces then go onto the gels.

When people do the gels this way in a bottle do you just take a good swig of it then resume with your normal hydration?

For the actual race I’m considering 2 more bottles on rear of seat too incase the aid stations are a nightmare. 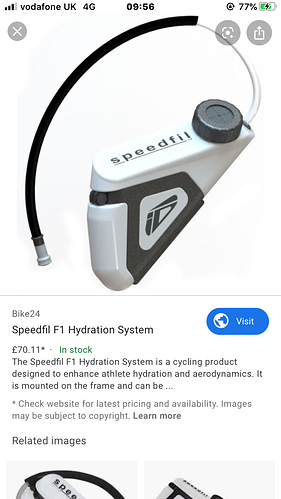 SIP, definitely sip. Well you can swig but you’ll only do it once.